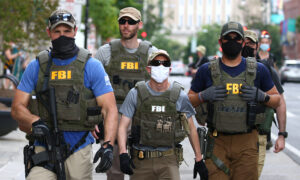 Trump and Barr Fooled Them All
0

Attorney General William Barr speaks during in a roundtable with law enforcement officials in the State Dining Room of the White House in Washington on June, 8, 2020. (Doug Mills-Pool/Getty Images)
Crossfire Hurricane

‘Developments’ in Durham Investigation Likely by This Summer, Barr Says

Barr said Durham has been pressing ahead with his investigation “as hard as he can,” despite facing barriers posed by the CCP virus pandemic, which had delayed some aspects of the probe.

“In terms of the future of Durham’s investigation, he’s pressing ahead as hard as he can. And I expect that we will have some developments, hopefully before the end of the summer,” Barr told Fox News’ “Sunday Morning Futures” on June 21.

He said the pandemic had slowed down the process to allow Durham’s team to interview people, adding that people had been reluctant to travel for interviews due to the virus. Despite the delays, Durham had been working on other matters that aren’t affected by the pandemic, Barr said.

Barr assigned Durham in early 2019 to investigate the origins of the FBI’s counterintelligence investigation of the Trump campaign and to assess whether the surveillance of Trump campaign associate Carter Page was free of improper motive. The probe was designated a formal criminal investigation later in 2019.

Barr had previously expressed concern over some of the information he had received so far from Durham about the probe, saying that he was “very troubled.” He added that he doesn’t expect Durham’s probe to result in criminal investigations into former President Barack Obama and former Vice President Joe Biden.

During the June 21 interview, the attorney general expressed concern and surprise over the media and the public’s lack of interest and enthusiasm over Durham’s probe, which he says concerns “civil liberties and the integrity of our governmental process.”

“It’s been stunning that all we have gotten from the mainstream media is sort of bovine silence in the face of the complete collapse of the so-called Russiagate scandal, which they did all they could to sensationalize and drive,” Barr said.

“And it’s, like, not even a whoops. They’re just onto the next false scandal. So, that has been surprising to me that people aren’t concerned about civil liberties and the integrity of our governmental process.”

He noted that Durham’s investigation would continue and won’t cease because of the election, but added that “what happens after the election may depend on who wins the election.”

Along with Durham’s investigation, Barr appointed U.S. Attorney John Bash to review the litany of unmasking requests made by officials in the late stages of the Obama administration and the early days of the Trump administration.

Justice Department spokeswoman Kerri Kupec said at the time that Bash’s review, when conducted in conjunction with investigations such as Durham’s, could provide the department with valuable information in understanding the motivation about certain actions.

“When you’re looking at unmasking as part of a broader investigation—like John Durham’s investigation—looking specifically at who was unmasking whom, can add a lot to our understanding about motivation and big picture events,” Kupec said.

Barr, in the June 21 interview, also characterized the volume of unmasking requests made by the Obama administration during the transition as “unusual for an outgoing administration, high-level officials” to be engaged in.

“Well, it depends on what the motivations were and why they were looking at it,” Barr said. “It makes you wonder what they were doing.”