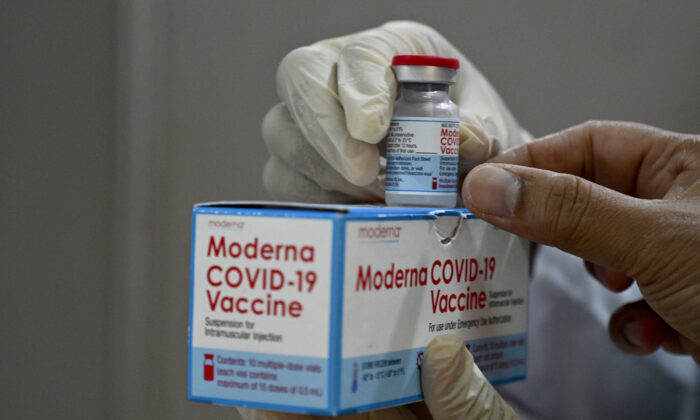 A health worker checks a box of the Moderna COVID-19 vaccine donated by the United States, during a booster vaccination drive at the Zainoel Abidin hospital in Banda Aceh, Indonesia, on Aug. 9, 2021. (Chaideer Mahyuddin/AFP via Getty Images)
Businesses in COVID-19

Development of ‘Omicron-Specific’ Shot Could Begin in Weeks: Moderna CEO

Moderna’s chief executive officer doesn’t expect any problems with the development of a booster shot against the latest strain of the CCP virus and hopes clinical trials can begin early next year.

Bancel noted that the biotechnology company is currently only awaiting important information on Omicron to begin development.

“That will take another week or two,” Bancel said, adding that “it will take a few months before we can produce 500 million doses after approval.”

If the U.S. Food and Drug Administration (FDA), Switzerland’s Swissmedic, and other regulatory agencies require further studies, then that would add at least three months, he said.

“Some authorities want a study, others are still undecided,” Bancel told the paper. “In my opinion, it depends very much on how severely the disease progresses.”

Bancel’s announcement on the development of an “Omicron-specific booster” shot comes as the company said on Dec. 20 that its existing COVID-19 vaccine booster shot sharply increased Omicron neutralizing antibody levels in laboratory testing.

Bancel called the findings of the lab study a “reassuring” development, noting that the company “will continue to rapidly advance an Omicron-specific booster candidate into clinical testing.”

The company produced between 700 million and 800 million COVID-19 vaccine doses this year, and expects to produce a higher number in 2022, boosting production from 100 million doses a month to 150 million.

A study published on Dec. 16 in the British Medical Journal suggests that the Moderna shot is up to four times more likely to cause heart inflammation—myocarditis or myopericarditis—than Pfizer-BioNTech’s COVID-19 vaccine.

“Vaccination with [Moderna’s vaccine] was associated with a significantly increased risk of myocarditis or myopericarditis in the Danish population,” and the rate was “threefold to fourfold higher” with the Moderna vaccine compared to the Pfizer-BioNTech vaccine, authors said in the study, which spanned almost 85 percent of Danes, or 4.9 million people aged 12 and older.

Omicron, a highly mutated and less deadly variant of the CCP (Chinese Communist Party) virus, has already spread around the globe after being first detected last month in southern Africa. Health experts in South Africa have said Omicron was not driving up hospitalizations or fatalities in the country to a significant degree.

The World Health Organization (WHO) reported on Dec. 18 that Omicron cases have now been reported in 89 countries, and that the number of infections was doubling every 1.5 to 3 days in areas with community transmission.