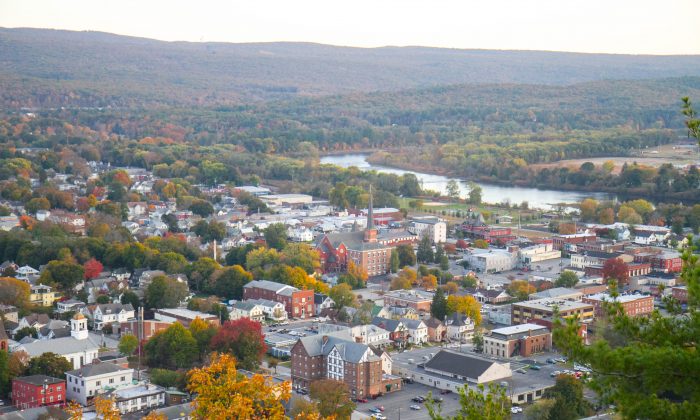 PORT JERVIS—As fall settles into winter in the Hudson Valley, Port Jervis is showing signs it is coming out of economic hibernation.

Several buildings on Front Street, the main drag in downtown Port Jervis, have new owners or interested buyers with plans to invest thousands of dollars into their refurbishment.

There is a snowball effect happening.

There are also plans to create more trails near the city for both hiking and biking, and earlier this summer, the city received over half a million in grants to improve houses in the city.

A long-vacant plaza is showing signs of life and reconstruction, and a main tourist attraction in the city has applied for a grant to expand its facilities.

Mayor Kelly Decker said there is a snowball effect happening—the more development that comes to the city, the more people become interested in relocating here.

Three buildings on Front Street have either come under new ownership recently or have prospective buyers with big plans to renovate them, an uplifting prospect for Port Jervis’s downtown.

Prospective buyers Jim Blanton and his partner Daniel Radtke, are fourteen-year residents of Port Jervis with a good track record of buying and renovating property in the city.

They don’t like the thought of such a historic part of the downtown being demolished and are trying hard to preserve it, but they first need to make sure that such an investment makes sense.

“People are just so grateful and appreciative, and we’ve tried to make it clear to all these people that it’s not a done deal yet,” Blanton said.

Blanton and Radtke say they are working out the logistics now and are starting to get an idea of how much effort clearing the title would be and how much the renovation would cost. The estimates that have come in so far are big, Blanton said.

“It’s a black hole,” according to Radkte.

The building, which had retail on the first floor, office on the second and an open floor plan on the third, was condemned this year due to structural damage. The city’s engineers have given the prognosis that the roof will not last another winter and the new owners are be under pressure to get it repaired before then.

The city approved its sale in an Oct. 13 council meeting, granted the new owner can stabilize it in time for winter and clear any liens on the property made by the former owner. Blanton said they are currently working with their attorney to clear the title.

“There’e been a lot of sudden movement going on [in Port Jervis] so we don’t want to put that backwards by tearing down this significant building,” he said.

The city has forgiven the $47, 800 it put into the building to stabilize the roof and the taxes owed on it, but as Mayor Kelly Decker said, this is the least they can do to save taxpayers money in the long run.

“A huge building like that torn out of our downtown would sit a vacant lot for many years to come,” he said. “If Mr. Blanton doesn’t get the title and the building has to come down, it is the tax payers who have to pay for it, and that’s at least $150,000.”

If the sale does go through, Blanton envisions putting retail on the bottom floor and apartments on the second and third floors. Because there were restaurants previously on the bottom floor, he thinks the infrastructure might attract others in the food business, but he is open to whatever industry may come.

Dec. 1 is their deadline to repair the building to a point where it meets the approval of the city’s engineer, but Blanton thinks the city is invested enough in seeing the building remain that it will be somewhat lenient.

“I think they just want to see that we are working seriously on it,” he said.

Not far away, 42 Front Street, which used to be Tri-State Fitness, has two new owners who also come with a good track record of rehabilitating old buildings.

The pair are not ready to disclose their plans for the building yet because, as one put it, “we are still just cultivating our vision,” but said they hope to have a clearer picture in the next few weeks and would then be ready to share it with the public.

David Krantz and Sean Donnelly have already have met with the engineers and the architect for the project, and have made a rendering of the building. He said they have tentative plans to open a microbrewery there.

There is a lot of work that needs to be done on the building—the back wall had to be replaced in 2011 and the temporary wall that the city put in was only supposed to last a year, Decker said.

The new owners would have about a year to get the building up to code, and Decker said the prospective buyers’ plan is to be operational by then as well.

The building is owned by the city, and like 24-32 Front Street, the city is forgiving the back taxes and construction costs it accrued on the building of $118,000.

“Instead of us incurring more debt, we are relieving what debt we have and hopefully putting them back on the tax roles so that they bring back more tax money,” Decker said.

John Faggione the director of the Port Jervis Recreation Department, posted a photo of the city from Point Peter on Facebook with the caption, “We are currently working on hiking and biking trail development that will give you scenes like this and more. Stay tuned….”

He emphasized plans for the trails are still in the very beginning stages at this point.

He is working with an individual who knows about trail development to map out potential trails, and at this point the only details he could give is that they hoped to have upwards of 25 miles of trails in Elks-Brox Park.

He hinted at the trails possibly going around the reservoirs there, but added “I didn’t give too much information because I didn’t want to lock myself into something then change it.”

The project is so new he did not have an idea how much it would cost or how it would be funded, but he hoped most of it could be done in house by the DPW.

At least some of the trails he hoped would be operational by the spring of 2016.

Anyone driving down Pike Street can see that work on Pike Plaza has commenced.

CEO of Ellicott Development Company, William Paladino, said they are finishing up the roof and soffits and hope to have the exterior work completed by the first week in November.

He said they are in talks with some potential tenants and would like to see some agreements finalized within the next one to two months and that the plaza should be up and running by the spring of 2016.

When asked how many tenants would fill the space, he said, “at least probably three that we’re talking to right now,” adding they are mostly “retail in nature.”

Farther out of town, but just as much a part of the city’s cultural fabric, is the Gillinder Glass Factory and Store. The factory, which is one of only a handful of glass factories still operating in the United States, has applied for a $60,000 grant to expand its facilities.

The Factory opened in 1913 in Port Jervis and now mostly manufactures industrial lighting. It employs approximately 70 people in the factory and five more in the store.

We are advertising Port Jervis as a good place to come because you have a lot of opportunity here
— Valerie Maginsky, Port Jervis Community Development Agency

The Factory said in a statement it would “acquire equipment to create a new division to vertically integrate manufacturing technologies required for production of our new, more scientifically advanced types of glass products,” if the grant money came through.

They estimate it would create 15 jobs over five years and add “substantial additional payroll in the community.”

Kolmar Laboratories at 20 West King Street, announced Oct. 14 that it had been acquired by the Knowlton Development Corporation (KDC), a “leading contract manufacturer of health and beauty-care products” based in Quebec, Canada, according to the company’s announcement.

“KDC has a solid history of investing in their businesses, their plants and their people, and we can expect that to continue with Kolmar,” said Robert Edmonds, President and CEO of Kolmar Labs Group in the announcement.

The name of the company will stay the same and all the current employees will keep their jobs, said Amy Skellett, the communications manager for the company.

Kelly Luposello, an employee at the company said, “I hear very good things [about KDC]… Fingers crossed that it’s going to be a really good thing for us.”

The community-based outpatient clinic at 150 Pike Street is going to be moving, according to VA officials.

Speaking at a veteran’s town hall in September, they said they were currently looking for a bigger building in Port Jervis and hoped to have renovations completed by July of 2016 with a soft opening in August.

The Chief Engineer for the project, John Cliffe described the current building as similar to a small railroad apartment.

“The overall message is that help is on the way—we’re going to get a new CBOC with a better layout,” Cliffe said.

It’s a very exciting time to be in Port Jervis, said Valerie Maginsky, the executive director of the Port Jervis Community Development Agency (CDA) “Things are starting to pop,” she said.

She cautioned however that the city’s infrastructure will have to be upgraded to make way for more development.

“As we grow back into a good, healthy economic state, you have all these other things that need to be worked on at the same time,” Maginsky said.

The city is looking at a $99 million project to refurbish the sewer lines in the city, she said. They are also looking at the city’s traffic flow, and have already started work on the city’s sidewalks.

“We are advertising Port Jervis as a good place to come because you have a lot of opportunity here,” she said, listing the  train in the downtown, the proximity to trails, and the urban resources surrounded by a bucolic environment.