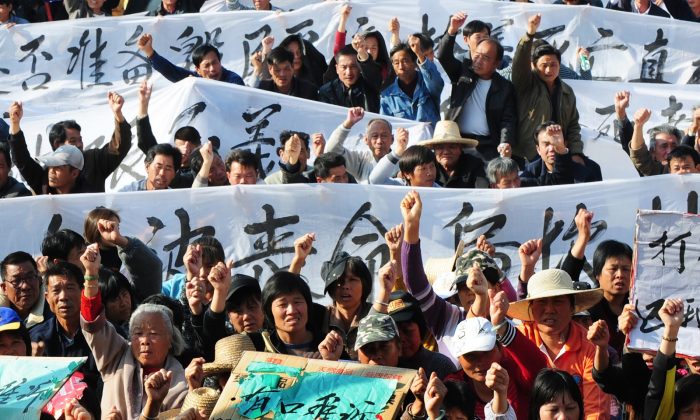 Villagers hold banners and placards during a protest rally by residents of Wukan, a fishing village in the southern province of Guangdong, as they demand the government take action over illegal land grabs and the death in custody of a local leader on Dec. 19, 2011. (STR/AFP/Getty Images)
China

Wukan, the community in southern China that made headlines five years ago when its democratically-elected leadership successfully stood up to higher authorities, is once again in political straits, the Hong Kong-based Initium Media reported June 19.

Lin Zulian, who was made head of the village commission and took part in the demonstrations against higher pressure during a deadly land dispute in 2011, was arrested on June 18 for allegations of corruption. In a televised confession two days later, he admitted to his crimes.

Many residents of Wukan, situated in the municipality of Shanwei, Guangdong Province, find the charges dubious and suspect that Lin’s confession may have been forced.

“Us villagers do not fully believe [the allegations,]” Mr. Huang, a local, told Financial Times. “This is a move by the higher authorities to suppress the land dispute.”

Land disputes are common and sometimes violent affairs in China, where local authorities come to the aid of powerful developers to seize the property of disenfranchised residents. But in Wukan in 2011, four thousand villagers demonstrated when the local government detained five residents and one died in custody, and successfully established a provisional executive council.

Though the events in Wukan were hailed as a symbolic breakthrough for grassroots democracy in China, the land dispute was never fully resolved. The frozen conflict, in which the government released the detainees but did not return the land, was re-ignited this summer with the surfacing of plans to begin construction on the seized property. But prior to a planned protest, the authorities struck.

Riot police surrounded Wukan and cut off traffic and internet access to the village. Officers arrived at the home of Lin Zulian, now 72 years old, and arrested him. Shortly afterward, the Hong Kong-based Ming Pao reports, he contacted his wife, telling her to do as she saw fit before being cut off; the same night, he phoned her again and told her not to cooperate with outsiders to hold the rally.”

The next day, Lin’s grandson was arrested, and on June 20, higher authorities published a video showing Lin admitting to having accepted bribes.

According to Hong Kong’s Apple Daily, foreign reporters were able to breach the police cordon to write updates from Wukan as the situation develops. Police attempted to lure the journalists away by saying that there would be a press conference in Shanwei, but they persisted and, with the help of locals, entered the village.

Update: Radio France Internationale (RFI) reported that as of June 23, the people of Wukan have continued to rally and stand behind their arrested representative Lin Zulian, whom they believe was forced to confess once his grandson too was detained. A thousand-strong gathering took place June 22 to support the two.

In the meantime, the authorities seem to be preventing Lin’s access to an attorney. Guangdong lawyer Ge Yongxi, whom Lin’s son hired to defend the embattled village head, said in a social media post that his firm’s director had received notice from the local Bureau of Justice requiring that “no legal procedures be made in regards to the Wukan case.”