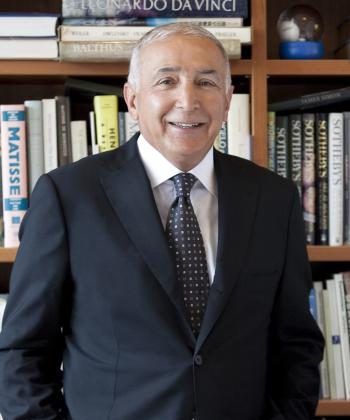 K. Thomas Elghanayan, chairman of TF Cornerstone, has formed the new company with brother Fred, after the split of Rockrose, the company the two owned with other brother Henry. (Image courtesy of TF Cornerstone)
Business

By Charlotte Cuthbertson
Print
NEW YORK—When K. Thomas Elghanayan develops a part of New York City, it’s a long-term labor of love. “I feel like I am contributing to a neighborhood,” he said of the areas where he has made his mark. Until recently, Tom was part of the Rockrose Development Corp. with his two brothers, Henry and Fred.

A curveball from brother Henry last year saw Tom and Fred join forces to create TF Cornerstone with two-thirds of the original portfolio, while Henry held onto Rockrose. “What we were is essentially what we are now,” Tom said of the new company. “We haven’t changed. We are developers of residential, commercial buildings—primarily in Manhattan.”

The family has changed the face of Manhattan, most notably in the meat packing district, West Village, and now Long Island City and Hudson Yards.

“Our main business philosophy, over the 40 years we’ve been in business is to get in the front, get in front of development,” Tom said. “Our expertise was to pick neighborhoods that we thought would develop, get there first, and as we have a very long time horizon, we could acquire property, and almost on a city planning commission basis, almost like long-term planners, figure out how to maximize the use and improve the whole area together.”

Rockrose acquired a lot of property in the meat packing district in the 1980’s and worked for 20 years to redevelop it. “It was actually very derelict neighborhood,” Tom said. “It’s hard to believe the meat market was a really third class area that you’d be afraid to go at night.”

The old Federal Archives building became a flagship of their efforts as it was converted into 479 apartments. The surrounding area also took shape, with 99 and 100 Jane Street being developed, as well as 110 and 114 Horatio. But it was the highline that drew the focus. Development is not without its controversy, and the community rallied around the old train tracks to save part of it from being demolished by Rockrose. “But it was very decrepit, it was falling apart,” Tom said. “We were much vilified for taking down the highline.”

The section of highline came down, but Rockrose supported the renovation of the remaining portion. “I take credit for being, in an indirect way, the main instigator for saving the highline,” Tom said. “I went to the grand opening party and it was very funny because people alluded to us but they missed the point.”

“The last train that ever came down the Highline was to our … Manhattan refrigerator building, [it] was a shipload of turkeys.”

It is Long Island City that beckons TF Cornerstone into the future. The View, a new 184-unit condo has sweeping views across to the iconic Manhattan skyline, and towers above the Pepsi sign that lights up the riverfront each night. Four other parcels are slated for construction over the next six years, and will include retail and a school.

“What drove this ship to me is that I’d exploited everything I could exploit in Manhattan,” Tom said. “There are no more frontiers, frontiers that I’d be willing to go to.”

Queens West won as the prime outer borough location. Tom said he used to gaze across at the “underutilized wasteland” as a kid and wonder how the industrial businesses had claimed the best views. “Its’ clearly the best location in Long Island City, on the waterfront, one stop from Grand Central, four minutes on the 7 train.”

A good relationship with local politicians paved the way for TF Cornerstone to carry on the development that has also brought the first large grocery store to the area.

The company has taken a conservative approach to acquisition and development, and is not overleveraged; it owns The View outright. They are currently looking to acquire some unfinished, distressed developments for a bargain. “Most developers, their eyes, their appetites are bigger than their capabilities,” Tom said. “So everyone overextends.”