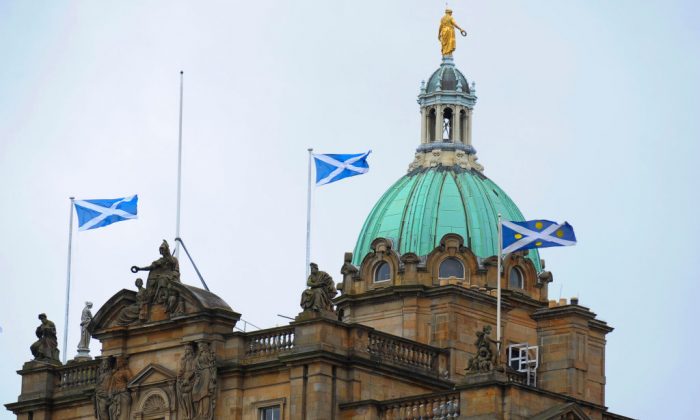 Saltire flags blow in the wind on top of The Bank of Scotland building on The Mound in Edinburgh on March 22, 2017. (Andy Buchanan/AFP/Getty Images)
UK

‘Devastating Winds’ to Hit the UK as Storm Caroline Moves In

Weather forecasters are warning of severe gales and danger to life as Storm Caroline arrives in the UK.

The Met Office has issued an amber warning that people in northern Scotland should “be prepared”. Winds of up to 90mph are expected to hit the region throughout the morning of Thursday, Dec. 7.

They have also warned that flying debris, such as tiles blown off roofs,  could be a danger to life and damage property.

Transport Scotland is warning that roads could be disrupted, while train services in northern and western Scotland have been cancelled.

Transport Minister Humza Yousaf said in a statement: “We are facing some challenging weather conditions in the next few days as a result of Storm Caroline and we will be working closely with our partners to try to mitigate the worst of these and get information out to the public so that they can plan their journeys.

“Disruption is very likely but we will make every effort to recover the network as quickly as possible when incidents do occur.”

The Met Office said that strong winds should be expected from 6 a.m. until 11:55 p.m. on Thursday.

Chief Meteorologist Steve Ramsdale said in a statement: “The strongest winds will reach the northwest of Scotland early on Thursday, extending to northeast Scotland and the Northern Isles in the afternoon.

“During Thursday winds will start to ease in the west with the strongest of the winds becoming confined to the Northern Isles in the evening.”

A yellow warning is in place for southern Scotland and parts of Northern Ireland with wind gusts of 60-70mph expected.

Storm Caroline will move away from the UK later on Thursday, the Met Office confirmed. As it does so, winds from the northwest will bring much colder air across the UK.

“With the return of air from a north westerly direction—with its origins in the Arctic—snow showers will become increasingly frequent and heavy across northern Scotland during Thursday evening,” Ramsdale said.