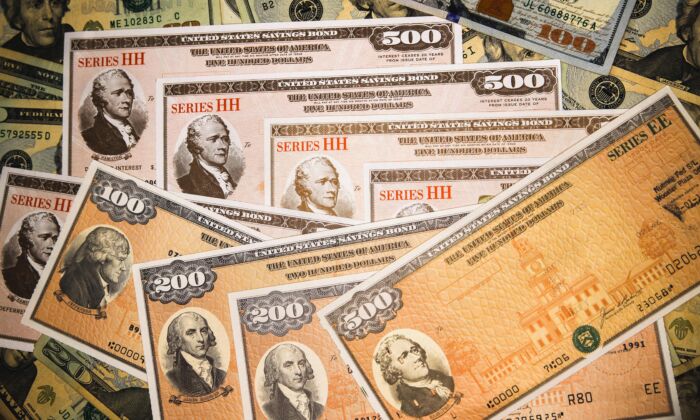 You can get your savings bonds replaced by writing to the The Bureau of Public Debt. (Jason Raff/Shutterstock)
Markets

Global debt at negative yields has plummeted to less than $3 trillion for the first time since December 2015, according to an analysis by Deutsche Bank.

With more central banks tightening monetary policy and unveiling efforts to raise interest rates to combat inflation, the share of subzero debt as a percentage of total outstanding bonds cratered in the past week.

A research note from Deutsche Bank, first reported by MarketWatch, highlighted that government-issued negative-yielding bonds fell to 8 percent of the total market, from a peak of 40 percent in September 2019.

Corporate negative-yielding bonds plunged to 0.1 percent, down from the record high of about 10 percent at the end of 2021, according to the bank.

The last time shares of negative-yielding government and corporate debt were this low was in February 2015 and February 2020, respectively.

Negative-yielding bonds give investors a guaranteed loss if they’re held to maturity.

But why would investors hold these types of debt instruments anyway?

If the bond price moves higher, traders can generate a return and offset the costs the bondholder endures. Also, many of these kinds of bonds provide holders with an annual or biannual coupon, allowing investors to garner a regular income.

“Speculative investors can also include those holding negative-yielding debt because they are nervous and willing to pay the government for protection,” JPMorgan Chase wrote in a report. “In reality, this subset is likely to be quite small, as nervous but rational investors would likely prefer to hold other safe-haven assets like gold rather than guarantee themselves a loss.”

Although retail investors can scoop up these bonds, central banks, pension funds, and insurance companies are generally the largest buyers of these investment vehicles.

Investment firms managing mutual funds are mandated to allocate their assets to bonds in order to diminish or hedge the risk of losses from other investments.

Sometimes, foreign investors may think that a currency could gain and experience deflation in foreign exchange markets. This would trim or eliminate the loss from negative-yielding bonds.

Central banks also like subzero bonds because they prompt investors to dip their toes into the equities arena and hunt for better yields. This props up the financial market with more traders diving into the stock exchange.

That said, the days of negative-yielding bonds could be winding down, experts forecast.

Governments and central banks are unwinding their pandemic-era stimulus and relief efforts as part of broader initiatives to fight red-hot inflation. From pulling the trigger on rate hikes to cutting balance sheets, bond yields are starting to climb again in response to these developments.

Three of the world’s largest negative-yield sovereign debt markets have seen gains in their bonds in 2022.

Germany’s one-year bond has climbed to minus 0.4 percent from minus 0.62 percent at the start of the year. The country’s two-year bond turned positive on March 30 for the first time since July 2013.

France’s one-year bond advanced to minus 0.46 percent this year from minus 0.65 percent. The last time it traded above zero percent was in May of last year.

The latest trend unfolding in international bond markets could be a boon for many economies worldwide, according to JPMorgan Chase. The Wall Street titan noted that subzero rates have led to distorted money markets, the misallocation of capital, and limited credit creation.

“The decline in the universe of negatively yielding bonds has the potential to become self-reinforcing as certain investors such as insurance companies and pension funds, who in previous years extended maturities and went down the rating spectrum to avoid negative yields, are now under less pressure to do so,” strategists, led by Nikolaos Panigirtzoglou at JPMorgan Chase, wrote in a note to clients.

The U.S. Treasury market has been extremely volatile this year, with the benchmark 10-year yield hitting 2.5 percent for the first time in nearly three years before falling to around 2.36 percent on March 30.

The two- and 10-year Treasury yields inverted for the first time in about three years. This means that there’s no spread to earn between borrowing for two years and earning interest on the decade-long bond.

Earlier this week, the five- and 30-year Treasury yields also inverted for the first time since 2006, adding to widespread inflation worries.

Inverted yield curves are typically viewed as reliable signals for downturns because they tell the market that short-term rates are elevated and that tighter monetary policy is making the economy sluggish.

However, financial experts purport that an inverted yield curve for a prolonged period can be a more effective recession indicator than a brief inversion.