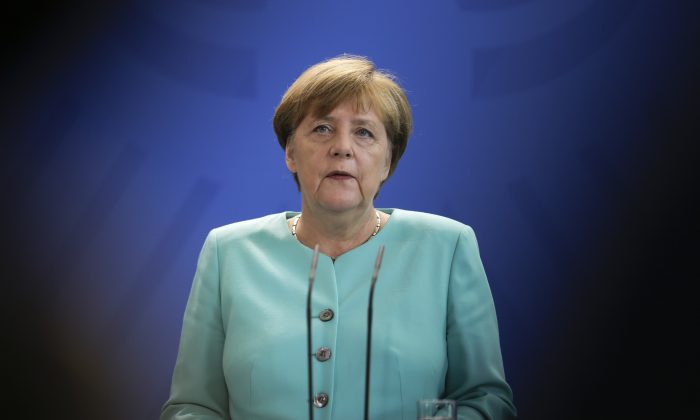 BERLIN—Deutsche Bank shares are down further after German Chancellor Angela Merkel gave no indication that her government might help the group with a U.S. demand for a $14 billion legal settlement.

Merkel told reporters in Berlin on Tuesday that “we naturally hope, even if there are temporary difficulties, that things will develop positively.”

But she refused to say if she’d consider stepping in over the U.S. government’s demand for a settlement in its investigation of the bank’s sales of mortgage-backed securities.

Deutsche Bank shares fell another 2.3 percent to 10.31 euros and are off 55 percent for the year as the bank struggles with weak profits and legal concerns like the U.S. investigation. Investors took huge losses on mortgage-backed securities in 2007-2008 when they turned out to be riskier than thought, helping kick off a global financial crisis.

Deutsche Bank says it hasn’t asked for help with the U.S. authorities. It says it expects to pay less than $14 billion after negotiations. And it says it is not seeking financial assistance from the government.

In any case, a government bailout could run into new EU rules aimed at protecting taxpayers from troubled banks and forcing shareholders and bondholders to take losses before taxpayers pay. And 2017 is an election year in Germany.

That has left investors wondering if the bank may have to raise more capital from investors, something that can dilute existing shareholders’ stakes. The bank says that is not on the agenda.

European banks have raised concerns over their low profits and, particularly in Italy, large piles of loans that are not being paid back due to a less than robust economic recovery. Bank woes affect the entire economy because banks are the main place European companies go for credit, not financial markets as in the United States. And troubled banks lend less.

Banks have seen their profits eroded by low interest rates, which squeeze the margins between what they lend at and what they borrow at. The European Central Bank charges banks 0.4 percent interest on money they leave at the central bank overnight. Normally, it would pay banks interest on those excess funds.