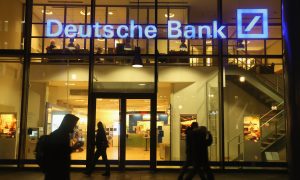 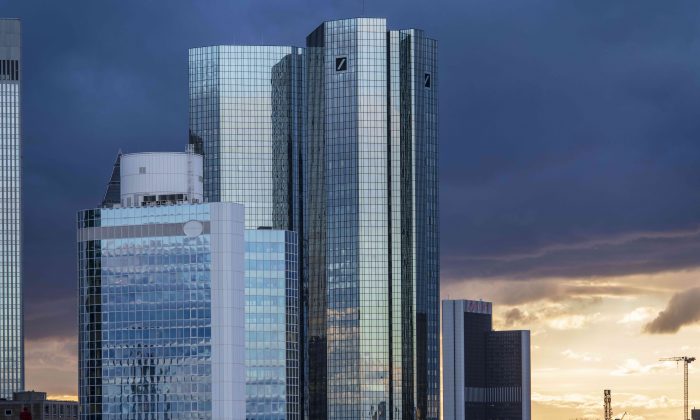 FRANKFURT AM MAIN, GERMANY - MARCH 07: Office buildings, including the corporate headquarters of Deutsche Bank, stand in the financial district in the city center on March 7, 2019 in Frankfurt, Germany. Some finance-related companies have been moving offices from London to Frankfurt due to uncertainties over Brexit. (Photo by Thomas Lohnes/Getty Images)
Companies

As Deutsche Bank AG and Commerzbank AG move closer to a deal, employee representatives at both lenders are lining up against a merger, saying the risks of a tie-up would outweigh the advantages.

Uwe Tschaege, Commerzbank’s deputy supervisory-board chairman and head of the bank’s works council, closed ranks with union colleagues from Deutsche Bank, saying in an email March 14 that their positions are “identical.”

Earlier this week, Jan Duscheck and Stephan Szukalski, two key labor representatives on Deutsche Bank’s highest oversight body, publicly opposed a merger, saying a combination would fail to achieve the goal of strengthening the bank while resulting in massive staff cuts. As many as 30,000 positions could be at risk if a deal were agreed, according to people familiar with the matter.

While Tschaege said that Commerzbank management hasn’t communicated with worker representatives on the issue, the spate of comments are the latest indication that talks behind the scenes are advancing.

After struggling for years to boost profitability and stem a prolonged decline in revenue, Deutsche Bank and Commerzbank are edging closer to a merger as they run out of time to show restructuring efforts are paying off, according to people familiar with the matter. Finance Minister Olaf Scholz suggested March 10 that the government is serving as a “ companion” to the discussions.

“We reject a merger,” as a deal would make the combined bank even more susceptible to a hostile takeover from abroad and “would not create a national champion,” Duscheck said. Szukalski, head of German banking union DBV, called the combination of Germany’s largest-listed lender “economic nonsense.”

Employee representatives are powerful forces in German companies, generally making up half the seats on supervisory boards, which hire and fire senior executives and sign off on major strategic decisions. They’re not isolated in their skepticism. Representatives of two large Deutsche Bank shareholders have expressed doubts about a combination, while financial regulators are also wary.

Still, a deal does have backing from the German Finance Ministry. Scholz and Joerg Kukies, a former Goldman Sachs banker who serves as his deputy, have been pushing a deal to support the small- and mid-sized companies that are the backbone of the country’s export-led economy, people familiar with the matter have said previously.