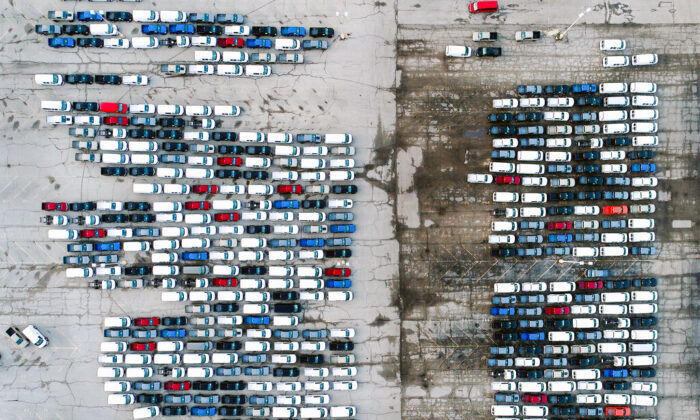 Mid-sized pickup trucks and full-size vans are seen in a parking lot outside a General Motors assembly plant where they are produced in Wentzville, Mo, on March 24, 2021. (Jeff Roberson/AP Photo)
Business & Economy

The chip shortage-driven auto production slump was the single biggest factor depressing U.S. economic output in the third quarter, shaving over 2 percentage points off the gross domestic production (GDP) number, which disappointed with its below-expectations print.

The U.S. economy expanded at an annualized pace of 2.0 percent in the third quarter, the Commerce Department’s Oct. 28 data (pdf) showed, with motor vehicles and parts making a negative 2.39 percentage point contribution to the overall GDP number. Economists polled by Dow Jones expected third-quarter GDP to rise by 2.8 percent, with Thursday’s print coming as a downside surprise.

The main factor behind the auto industry’s woes is a worldwide shortage of microchips, which are needed to run all of a modern vehicle’s complex systems. U.S. motor vehicle production has fallen in six of the last nine months, with September’s run rate of 7.51 million vehicle assemblies was the lowest—excluding the short-lived dive to near zero during the COVID shutdowns—since 2010 when the industry was making a wobbly recovery from the financial crisis.

Durable goods—a category defined as products designed to last at least three years and one that includes motor vehicles—shaved a total of 2.7 percentage points of GDP in the third-quarter, the Commerce Department data showed. Reinforcing the sharp negative contribution of durable goods to economic output in the July-September quarter, consumer spending on durable goods fell by 26.2 percent from the prior quarter. By contrast, durable goods spending rose 11.6 percent quarter-over-quarter in the April-June quarter, helping boost second-quarter GDP to 6.7 percent in annualized terms.

“Supply chain constraints, which are causing many prices to rise sharply and making many goods simply unavailable, were evident in the underlying details,” the Wells Fargo research team wrote in a note (pdf), arguing that the impacts of the supply chain crunch were evident in third-quarter GDP data.

The Commerce Department said the deceleration in third-quarter output was driven chiefly by a slowdown in consumer spending, which accounts for more than two-thirds of U.S. economic activity. Consumer spending grew at a 1.6 percent rate in the third quarter after a robust 12 percent pace of growth in the April–June quarter. Spending on goods overall tumbled over 9 percent, the data showed, while spending on durable goods fell over 26 percent.

Inflation, too, took a bite out of third-quarter GDP.

“The sharp rise in goods prices over the past year or so and supply chain constraints, which are making many goods essentially unavailable, likely are weighing as well on consumer spending on goods,” the Wells Fargo team wrote.

It was a similar story in Germany, Europe’s carmaking powerhouse. Germany’s GDP rose 1.8 percent in the third quarter, against expectations of a 2.2 percent rise, with ING analysts blaming weak industrial production.

“This time round, it’s supply chain frictions that have undermined the German economy’s growth performance. While private consumption and services have still enjoyed the full post-lockdown rebound, industrial production had another weak quarter,” Carsten Brzeski, Global Head of Macro at ING Research, wrote in a note.

Looking forward, Wells Fargo analysts expect growth to rebound in the final quarter of the year, “albeit not to the pace seen earlier this year, as supply chains become unglued.”

The analysts also expect U.S. inflation to moderate somewhat next year, “but we also do not think that it will recede all the way back to 2 percent, as some policymakers at the Federal Reserve expect.”

Fed policymakers have maintained that consumer price inflation, which rose to a 31-year high in the third quarter, is a transitory phenomenon that will abate, although they have increasingly begun to acknowledge that it is more persistent than previously believed, as they look to rolling back some of the crisis-era support measures for the economy.

Further supply chain disruption, COVID-19 flare-ups, and central bank missteps are the top risks to the world economy in 2022, according to a Reuters poll of more than 100 economists, with a significant number of them predicting that sustained inflation is likely to dent the economic recovery.