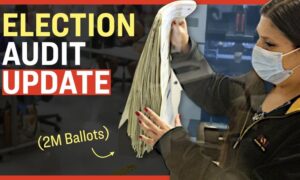 A Detroit school bus carrying students to class Monday morning, Oct. 8, was rear-ended by a mini-van in a collision.

Detroit Deputy Fire Commissioner Dave Fornell told Fox News that there were eight children under the age of 14 on the bus when the accident occurred.

All the students were taken to Children’s Hospital of Michigan as a precaution, the Free Press reported.

The minivan held an adult driver and a 15-year-old passenger. Both were taken to Detroit Receiving Hospital for evaluation, Deputy Commissioner Fornell told the Free Press.

The bus driver did not need medical attention.

The bus was carrying students to Marcus Garvey Elementary School. The driver had just stopped at an apartment complex, she told Fox News. She was headed east on East Lafayette Street when she stopped to make a left turn.

When she did, the minivan rear-ended the bus, the driver said, hitting the bus behind the left rear wheel. The minivan’s right front fender was crushed, the bumper torn off, and the windshield was smashed.

The bus driver told Fox News she wasn’t sure why the minivan driver didn’t stop.

The collision happened at around 8:30 a.m. when streets were full of workers headed to their jobs and parents taking their children to school.

It was a foggy morning, but the fog was not so dense that the minivan driver would have had any trouble seeing the school bus.

Neither the Detroit Police Department nor the Detroit Public Schools Community District has yet made any statements about the collision. AP reported that the accident is under investigation.

Fortunately, no one was injured in the incident.