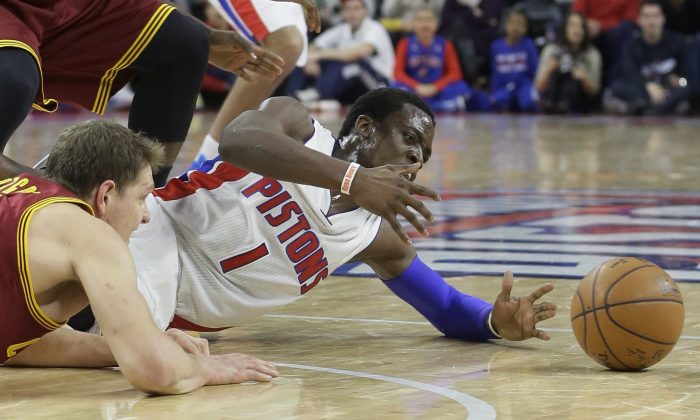 Fans of the Detroit Pistons are not pleased with the prospect of giving Reggie Jackson a big deal this offseason, since Jackson’s play with the team so far after being acquired in a trade has been pretty bad.

The Pistons are 1-7 since Jackson was acquired from the Oklahoma City Thunder in a three-team deal that saw Detroit give up point guard D.J. Augustin and shooting small forward Kyle Singler.

Jackson has yet to put together a solid game, shooting just 35.9 percent from the field and 24.1 percent from 3-point range. Jackson is dishing out 6.8 assists a game but coughing up 3.3 turnovers.

Pistons coach Stan Van Gundy has pronounced Jackson as Detroit’s point guard of the future despite the rough play, but fans of the franchise are not happy with the idea of giving Jackson a big deal that will likely be bigger than the four-year, $48 million extension he turned down from the Thunder.

“He fills up the box score like a certain someone else who should not be named but his actual point guard play has been pure garbage,” said one user on Detroit Bad Boys, a fan blog.

“I’m not sure if that’s because he’s no point guard or if it’s merely because he hasn’t had enough time to learn SVG’s system. It’s terrifying to think we need to play Reggie Jackson as our starter next year and we are only going to know sometime around December if he’s good or bad then. That’s what happens when you decide to roll with a project instead of a finished product.”

“I don’t think it’s a coincidence that our offense has completely fallen off a cliff after we swapped a middle-of-the-road role player point guard for an above-average shoot-first combo guard. It’s like watching a [expletive] house of cards fall apart every single game,” added another.

“Note to Stan. Don’t expect offensive cohesion when you tap a poor-man’s Allen Iverson to dominate the ball. That gets you highlight lobs and layups. Apparently, it doesn’t get you wins.”

“It’s pretty basic stuff. Jackson is a slasher but he cannot get to the bucket because the paint is clogged. Monroe and Drummond simply do not work together with Jackson. If Jackson is going to be your point guard you need a big man who can shoot from the outside and space the floor which neither Monroe or Drum can do,” added a user on NBA.com.

A primary problem with Jackson is that he can’t shoot from long range. He’s only had one season above 30 percent, and is at 28 percent for his career. Jackson has shot about 27 percent from 3-point land this season, and just 20.7 percent on catch-and-shoot 3-pointers.

Jackson could possibly fit well with Jennings in a dual-point guard backcourt, since Jennings can shoot the three well and is also skilled at catch-and-shoot long range shots, coming in at 42.3 percent (above his 36 percent from long range) before he got injured.

Van Gundy is, like some fans, urging patience, saying that Jackson “has played pretty damn well” for the Pistons so far.

“The problem is, we haven’t won, and so it coincided with him coming. I’m not sure it’s on him. I think we’re getting out of him what we thought we would get. I think he’s been good, and explosive, getting better every game. We haven’t won. It’s been close games against good teams and we haven’t shot the ball,” Van Gundy, the coach and general manager, told NBA.com.

Van Gundy also noted that the trade was made more for future seasons than this season. “We knew as far as for this year that it was a gamble,” he said. “Just because of continuity, we would’ve been better off not making moves. We knew that. We thought we could make those moves and still stay right in the playoff race and we were willing to take that gamble because of what we thought it did for the future.”

Some fans echoed the view that Jackson could fit in long-term.

“We got Reggie because we wanted a secure lock on a good point guard without the security and certainty of a healthy Brandon Jennings return. He had a bad first couple of games but his production recently has not been terrible. Our TEAM can’t finish games,” said one user on Detroit Bad Boys.

“I tend to agree with that,” added another. “If the SG and SF spots were manned by serviceable guys, would it make Reggie Jackson look like a better PG? Would he have to take as many shots?”

Whether Jennings can return to his top form from injury is a key component in the Jackson situation, but perhaps more important is rookie Spencer Dinwiddie.

Dinwiddie, 21, was picked up in the second round of the 2014 draft by the Pistons, after three seasons playing for the Colorado Buffaloes.

Dinwiddie suffers from some of the problems that Jackson does–his shooting has also been atrocious this season–but is more of a pure point guard who focuses more on setting up his teammates.

Like most rookies, Dinwiddie has shown flashes of brilliance but also had some seriously bad outings. In the six wins he’s played in, for instance, he’s averaged 3.5 assists and only one turnover in 12 minutes a game.

One of Dinwiddie’s best games came in a near-blowout against the Wizards in late February. Dinwiddie had 20 points and seven assists in 21 minutes, nearly leading Detroit to a comeback win.

“He was terrific,” Van Gundy told the Associated Press after the game. “He was playing too well (to take out). He was making a lot of plays and stayed on the attack. Outstanding game.” Because Dinwiddie was playins so well, Jackson spent most of the fourth quarter on the bench–a situation that cropped up again against the Lakers this week.

“We know what Spencer can do,” Greg Monroe added. “He’s just getting better with time. The greatest teacher in the league is experience.”

Some believed that Dinwiddie had played well enough in college to go in the first round of the draft, but he was injured during his junior season, raising some doubts about how he’d recover. However, his improvement shows the potential.

If Jennings can make solid progress in his recovery and Dinwiddie keeps improving, it could perhaps provide more incentive to let Jackson walk after this season.