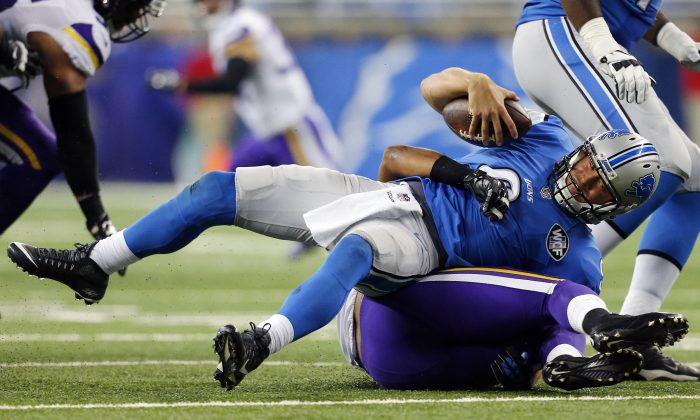 Detroit Lions quarterback Matthew Stafford (9) is sacked by Minnesota Vikings inside linebacker Eric Kendricks during the second half of an NFL football game, in Detroit, on Oct. 25, 2015. (AP Photo/Rick Osentoski)
NFL

Video: In Lions-Eagles Game, Woman With Banner Gets on Field & Fans Boo

An animal rights protester apparently got on the field during the Thanksgiving Detroit Lions-Philadelphia Eagles game in Detroit’s Ford Field.

Protester runs out on the field during @Lions and @Eagles game #ThanksgivingFootball #Lions #NFL #NFLThanksgiving pic.twitter.com/pI3h8NT1Jo

A woman tried to unfurl a banner before security escorted them off the field. Some claimed the woman was protesting against animal abuse.

The animal rights group Direct Action Everywhere, or DxE, claimed responsibility for the protest, confirming it with an Epoch Times reporter on Twitter.

“We love our dogs and cats at home, but spare little thought for the turkey lying dead on the table,” said Cat Roberts, an activist who rushed the field, in a press release. “It’s time we extend our compassion to all animals.”

“Thanksgiving is a deadly feast,” added Araceli Rodriguez, who is another activist who took part in the demonstration. “40 million suffering and dead is no cause for celebration.”

Fans of the Lions booed the woman.

DxE said the demonstration is to call attention to the “massive violence against animals” during the holiday season.

The group also released a video that allegedly shows footage from a turkey farm in Northern California. DxE says the farm, which supplies turkeys to Whole Foods, forces the birds to endure “horrific conditions.” Whole Foods and the farm denied the claims.

Responding to the video, a Whole Foods spokesperson stated that DxE are looking for “a total end to animal agriculture and meat consumption” and aren’t about “farm animal welfare.”  The spokesperson, Michael Silverman, added, “Everything they say, do and show is produced with that specific goal in-mind.”

The Eagles have now lost three straight games. NJ.com reports that the situation has gotten worse: “Adding injury to insult, the Eagles’ malaise comes just two days after an agent for a starting player on the roster told NJ Advance Media that the team had tuned out Chip Kelly’s message and that the head coach had lost the locker room.”

Kelly addressed the media after the loss, saying there’s no excuses for it. “Didn’t coach well today. Didn’t do really anything well today,” Kelly later said.

But he added that there’s “is still a chance to make the playoffs.”

“I believe our players competed. We haven’t put our players in position to make plays,” he said.

In his best game of the season, Lions quarterback Matthew Stafford threw for 337 yards and five touchdowns, with three of them going to receiver Calvin Johnson.

The Lions have now won three straight games, but they’re still last in the NFC North.