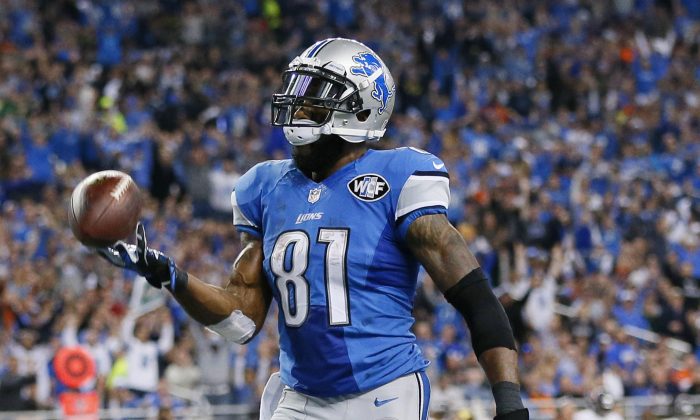 Detroit Lions wide receiver Calvin Johnson tosses the ball after his 25-yard reception for a touchdown during the first half of an NFL football game against the Chicago Bears in Detroit, Thursday, Nov. 27, 2014. (AP Photo/Rick Osentoski)
NFL

After beating the Chicago Bears last week, the Detroit Lions will face the Tampa Bay Buccaneers next Sunday. Here’s some of the latest updates:

Coach Jim Caldwell said that Ray Rice, who was reinstated by the NFL, should get another shot in the league.

However, he stipulated that it shouldn’t be with the Lions.

Speaking with the Free-Press, he said,”We haven’t considered that at this point.”

“I’m not real sure what’ll happen to him in the league.” Caldwell added. “Certainly, I do believe in second chances, as I’ve mentioned on several occasions, and at some point in time I think he will get one. When that’s going to happen, I don’t know.”

The Lions have one of the worst rushing offenses in the NFL, averaging just 81.7 yards per game.

Calvin Johnson has become the fastest wide receiver to make 10,000 yards receiving, doing so against the Chicago Bears last week.

“That’s big, especially for a receiver,” Johnson told ESPN. “To be able to do it, in the fashion that we were able to do it and with the help I have from the rest of my teammates, we all share and take part in that.”

He also moved into 43rd all-time in receiving yards.

Matthew Stafford had his best game this season against the Bears, but Caldwell said that it’s not reasonable for him to perform that well every game.

“Obviously, this is not a typical performance now,” Caldwell said. “Let’s not fool ourselves, right? Seventy-seven percent (completion percentage) is something that’s not done consistently in this league.

“I think we were playing at the same tempo we play at every game,” Stafford said.

“We weren’t no-huddle, we were huddling, but we were trying to be as fast in and out of huddles as we could, dictate to the defense what the pace of the game was going to be. That’s all great, but if you don’t execute it doesn’t work. We were executing today and that’s the big thing.”