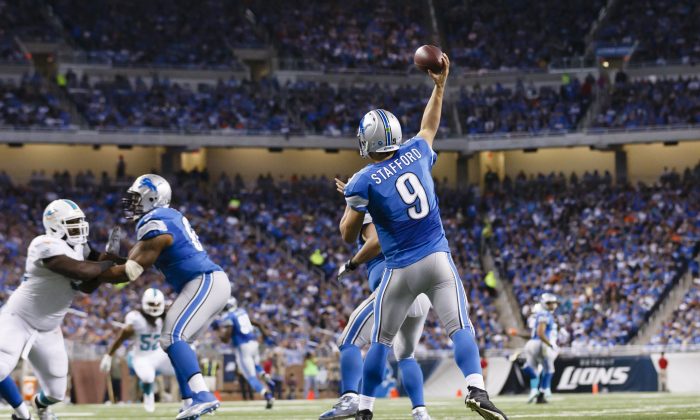 The Detroit Lions lost to the New England Patriots on Sunday and they’ll have a quick turnaround, playing the Chicago Bears in Detroit on Thanksgiving Day. Here’s some of the latest updates:

Raiola not to be penalized for block

Center Dominic Raiola won’t get fined or punished by the NFL for a cut block against the Patriots that left some members of the New England team angry.

Raiola was also seen on film taking a swing at the back of Zach Moore’s head on at least two plays, MLive.com reported.

He also dived a Moore’s legs on the last play of the game and QB Matthew Stafford took a knee.

New England coach Bill Belichick wasn’t pleased with the move. “Sure there was a lot of frustration there with Raiola. He’s never beaten us. Tough day for him,” he said after the game.

SI.com reported the NFL won’t take action against him for the cut block. However, it was unclear if the league would penalize him for taking a swing at Moore.

Raiola took responsibility for the cut block, but he didn’t apologize.

“He and I talked,” coach Jim Caldwell said, via MLive. “We addressed the issue. What we talked about is a private matter, but he knows how we like to do things around here. And that’s the end of the story.”

Matthew Stafford admitted to making a considerable mistake against the Patriots early in the fourth quarter, as the team was trailing 34-9.

Stafford attempted to run for a first down on fourth down but was short by more than a yard. “I got to get that,” he said, via MLive.

“I’m looking at the sticks, and I just thought, ‘I believe it was Patrick Chung over there, or somebody was over there, didn’t want them to go low,’ ” Stafford added. “But I got to get that.”

Stafford said he doesn’t know why his accuracy has been poor.

“I don’t know,” he said. “I thought we had some chances to make some plays.”

Drops, lack of focus a problem

The Lions defense, ranked best in the league, hasn’t been a problem this season, but the sputtering offense–which failed to score a touchdown versus the Patriots–has come under fire as of late.

There were three dropped passes in the end-zone that could have dramatically changed the complexion of the game if the receivers had held on.

Wide receiver Jeremy Ross blamed it on a “lack of focus.”

“Drops, I mean anytime anybody drops the ball, we’re just not focusing hard enough on the ball all the way until it hits our hands,” he told the Free Press.

The Lions will be without several players in their pivotal match with the Bears.

According to the Detroit Free Press, right guard Larry Warford will be out until next month, and left tackle Riley Reiff has been listed as uncertain to play Thursday.

The Lions didn’t practice on Monday to rest up.

Coach Jim Caldwell said that Reiff didn’t appear to suffer a knee injury in the Lions’ loss to the Patriots.

“Not quite certain yet,” Caldwell told the paper. “We’ll kind of see how it goes here in the next couple of days.”

“One of the things that’s unique about that group of guys is they’re pretty flexible,” Caldwell added. “They can play both sides. I think you’ve seen Lucas go both ways as well. (Waddle) is a bit more of a veteran player, so guys work inside, outside. They work in unison together quite often, so the change is not as drastic as you might think.”