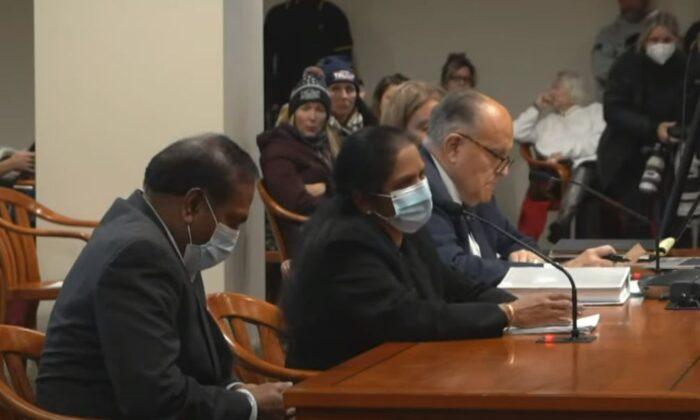 A City of Detroit election worker said at a Michigan State legislature on Wednesday that she was told to backdate absentee ballots.

The woman, who was identified only as Jessy Jacob, told the bipartisan legislative hearing on Wednesday night that she and others were directed to backdate about 100,000 absentee ballots, or about 10,000 per day. The woman confirmed to former New York Mayor Rudy Giuliani, one of President Donald Trump’s lawyers, that her supervisor told her to do this.

Giuliani asked her if her supervisor told her to use the “phony date of the day,” and Jacob replied in the affirmative.

“Would you say Jessy that was an experience you never expected? That level of crookedness and dishonesty at the Detroit center for counting votes?” Giuliani also asked her. “Yes, the whole city,” she responded.

Jacob, who Giuliani said never testified before, worked in Detroit and said election workers like her were coached on how to change ballots. She was also advised not to request voter identification if there were problems with the ballot. However, Jacob said she continued to ask for voter ID for her “peace of mind.”

Michigan Judge Timothy Kenny previously dismissed an affidavit that was sent by Jacob, citing a lack of credibility, and asserted that she was speculating and provided few details. She submitted the sworn statement claiming that poll workers told voters to cast their ballots for Democrat presidential candidate Joe Biden.

In her sworn statement earlier this month, Jacob said she was instructed to backdate mail ballots and not to look for any deficiencies with the ballots. She also claimed she was told not to ask for identification when voters arrived to vote in person.

“I directly observed, on a daily basis, City of Detroit election workers and employees coaching and trying to coach voters to vote for Joe Biden and the Democrat Party,” she wrote in the affidavit, adding that she witnessed them “encouraging voters to do a straight Democrat ballot.”

A Michigan Secretary of State official told The Epoch Times on Wednesday, amid the hearing, that “no actual evidence of any wrongdoing or fraud was presented, despite repeated questions requesting such evidence from lawmakers.”