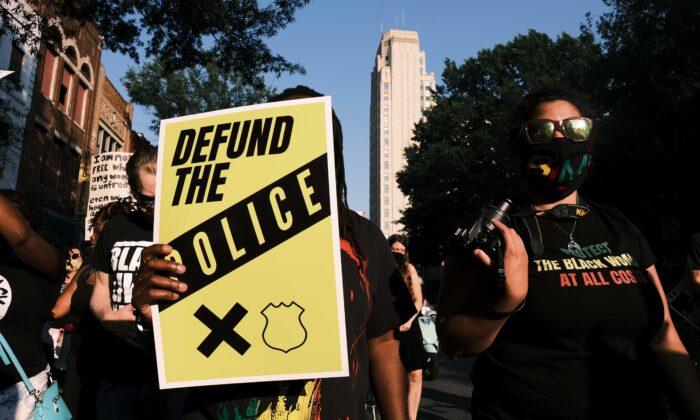 A protester carries a sign that reads "Defund The Police" during the Black Women Matter "Say Her Name" march in Richmond, Va., on July 3, 2020. (Eze Amos/Getty Images)
Viewpoints

Deterrence at Home and Abroad

In Switzerland, there are statues in honor of generals, not because they won battles or wars, but because they kept the country out of war. How did they do that? By making Switzerland impregnable and thus deterring any military aggression.

Working with the defensive advantage of the Swiss Alps, the generals militarized the entire country. Mountains were hollowed out to provide secure bases for the air force, artillery, and supplies and equipment for combat. Bridges and mountain passes were mined so that they could be destroyed in the face of invaders. All men were inducted into the military reserve and kept their rifles with them at home. Air force pilots practiced flying missions through the narrow valleys of the Alps. Switzerland became a very unattractive target for military incursion.

The Swiss are saying, “Invade us at your peril, because we are ready for you and will make you pay, and we guarantee that you will fail.”

The opposite of deterrence is appeasement, which means deferring to and accommodating the actions and goals of the other party. No threat is implied, but instead, goodwill by the other party is hoped for. Direct conflict may be avoided, temporarily at least, but at the cost of the interests of the appeasing party.

The entire organization of tribal society is devoted to the necessity of deterrence for the maintenance of security and order. In the Middle East, where I lived with and studied a tribal people, and in Africa and Central Asia, political life is ordered by an array of smaller and larger descent groups, defined by common ancestors, and the solidarity or cohesion of those groups. The two operative cultural principles are “collective responsibility”—all members of a group are responsible for the welfare and the acts of group members—and “balanced opposition”—you always side with closer kinsmen against more distant kinsmen.

Small, closely related kin groups might conflict, but in a conflict with more distant others, the small groups will think of themselves as united by their common ancestor and oppose the others with more distant ancestors. So which group at what genealogical level one identifies with depends upon with whom one is in conflict. In this way, no small group faces a large group, so there’s usually a demographic balance between groups in conflict. What every tribesman knows is that the kinsmen of anyone he attacks would mobilize to take vengeance. The readiness of each group to defend its members’ lives and property is a deterrence against aggression. Peace isn’t guaranteed in tribal societies, but aggression is most likely to be directed outside toward other tribes or nontribal populations.

In remote peasant communities, especially mountain dwellers where state oversight is limited, people take measures to provide deterrence against offenses against person and property. For example, in mountain regions such as highland Sardinia, which I’ve studied first hand, the shepherds in the vast pastures guard against damage to their sheep stations and the rustling of their flocks by being prepared to retaliate. In vendetta, individuals or members of a single family will strike back at those who have violated their interests. In Villagrande Strisaili, the village in which I lived, shepherds were shot-gunned to death in the street for having encroached on another shepherd. Sometimes this leads to cycles of violence between the families involved. Highland Sardinians tend to be careful because they know that assaults won’t be taken lightly and may lead to vendetta and a violent reply.

In foreign policy, the question arises about the appropriate role of deterrence in relations between countries. There are many cases throughout history that suggest the disastrous consequences of the absence of deterrence. A well-known and serious case is the response of Great Britain and other countries to the rise of Adolf Hitler.

Exhausted from World War I and the Great Depression, other European countries hoped that if they didn’t interfere with Germany, Hitler wouldn’t cause trouble. He was left to build up his military, roil up his followers, and develop his own plans of German supremacism. The cost of appeasement in this case was five years of world war and between 70 million and 85 million people dead.

The current U.S. government, the Biden administration, following the path of its ideological predecessor, the Obama administration, has committed to an absolute policy of appeasement toward the Shi’a Islamic Republic of Iran, a theocratic totalitarian state that’s the world’s leading sponsor of terrorism. Their theory is that if we’re nice enough to them—sending them planeloads of money, canceling sanctions, and remaining silent about their offenses against civilized life—they’ll become a rule-following, tolerant, and peace-loving member of the liberal world order. So far, the mullahs have laughed all the way to the bank, from which they’ve funded more intrusion into neighboring and distant countries. U.S. appeasement is leading to an Iran with nuclear weapons, much to the dismay of Iran’s Sunni Arab and Jewish neighbors.

The People’s Republic of China, unlike Iran, is an existential threat to the United States. It aims to replace the United States as the world’s superpower by any means necessary and has been frantically expanding its military power and political influence. The Biden administration, perhaps because President Joe Biden is compromised because of his family’s lucrative deals with China, has a firm policy of appeasement toward China. At the same time, the Biden administration is systematically undermining America’s ability to counter China by destroying the U.S. energy industry, disrupting domestic life by opening U.S. borders to millions of illegal aliens, and subverting the U.S. military by underfunding it and by purging its ranks.

Claiming that the U.S. military is, like the entire country, “systemically racist” and filled with white supremacists and far-right domestic terrorists, the Biden administration is removing the strong arms that the United States needs to defend itself. Anyone who wasn’t obedient enough to take the ineffective and dangerous COVID-19 vaccines was also purged. In place of these strong arms, Biden wants to fill the ranks with LGBT social justice warriors to replace the true warriors in its ranks. Biden does have a good model about how to handle China; he’s going to deal China the kind of blow that he dealt the Taliban in Afghanistan.

As in tribal and peasant societies, deterrence is used in the United States, with spotty effect, to maintain peace and protect life and property. But unlike tribal and peasant societies where deterrence is based on self-help, in the United States, like other complex industrial and post-industrial urban societies, it’s (supposed to be) provided by specialized organizations, such as the police and other security agencies. But something extraordinary happened in 2020.

The Democratic Party repudiated the police on the grounds that it was “systemically racist” and targeted black men for death. The party and half of the country, including most major institutions, adopted the policies of the self-identified Marxist organization Black Lives Matter (BLM), which rejected the nuclear family, vilified white people, and, above all, advocated defunding and disbanding the police. The central claim of BLM, that police victimized black men, was empirically false, all statistical evidence absolutely refuting it.

It was further claimed that the entire justice system was racist and that this was proven by the disparity of black prisoners in jails, blacks being overrepresented in relation to their percentage of the population. So “justice reform” required the emptying of prisons and the releasing of all blacks arrested. Radical district attorneys complied, releasing many arrested criminals. The complaint of disparity ignored the crucial fact that blacks, at 13 percent of the population, committed almost half of the violent crimes (most against other blacks), making them three times overrepresented among criminals.

The police were duly defunded, handcuffed with regulations that kept them from doing their jobs, and thrown under the bus by officials when they actually did their job. Deterrence for crime disappeared, and, of course, crime rates soared, making Democrat cities increasingly dangerous and unlivable. Ordinary citizens and businesses, especially in minority communities, were and are targeted by criminals and suffer for Democrat BLM lies and the war against deterrence.

Without deterrence against aggression and violation of the law, peace and order are unobtainable. Those trying to replace it with “social justice” and “inclusion” are leading us down a path to anarchy and chaos.