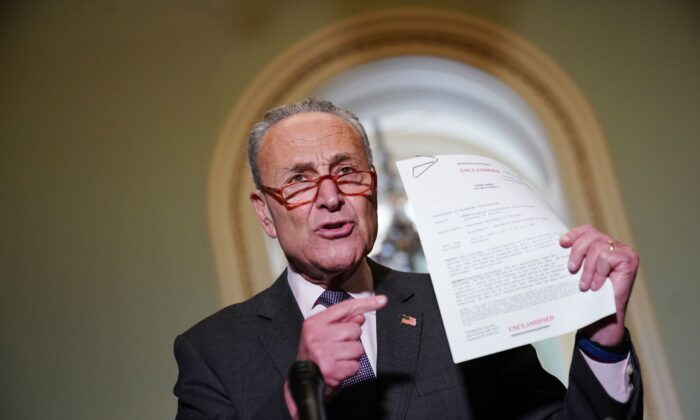 Senate Minority Leader Chuck Schumer (D-N.Y.) speaks to reporters as he holds a transcript of the phone call between President Donald Trump and Ukraine President Volodymyr Zelensky, during a press conference at the US Capitol in Washington on Sept. 25, 2019. (MANDEL NGAN/AFP/Getty Images)
Trump Administration

The transcript provides no evidence of Trump making a promise to Zelensky, as a “whistleblower” had claimed, or of there being any quid pro quo in return for reopening an investigation into possible corruption by Joe Biden and his son Hunter.

For his part, Trump said the transcript proved “it was a nothing call.”

House Select Committee on Intelligence Chairman Adam Schiff (D-Calif.) harshly disagreed, claiming the transcript “was far more damning than I or many others imagined. … What those notes reflect is a classic case of Mafia-like shakedown of a foreign leader.”

Schiff said Trump knew that Zelensky “was desperate for U.S. support,” thanks to Ukraine’s “hot war” with “Putin’s Russia,” and “immediately after the Ukrainian president expresses the need for more weapons,” Trump said he “has a favor to ask,” noting that the U.S. has “done a lot for Ukraine … without a lot of reciprocity. This is how a Mafia boss talks.”

The transcript shows that after Zelensky spoke of defense needs, Trump said he “would like you to do us a favor.” Trump asked Zelensky to “find out what happened” regarding Ukraine’s potential involvement in the investigations into his campaign in 2016. Trump also suggested that the Democratic National Committee server that allegedly was hacked by Russia could be in Ukraine.

Later in the call, when Zelensky said all investigations would be done “openly and candidly,” Trump asked Zelensky to look into the claim that Joe Biden had shut down an investigation in Ukraine into a prosecution involving Biden’s son.

After reading the transcript, Speaker of the House Nancy Pelosi (D-Calif.) issued a statement, saying, “The release of the notes of the call by the White House confirms that the president engaged in behavior that undermines the integrity of our elections, the dignity of the office he holds and our national security. The president has tried to make lawlessness a virtue in America and now is exporting it abroad.”

On Sept. 24, at a dramatically convened afternoon news conference, Pelosi announced an “impeachment inquiry,” prompted in part by the Trump call. Impeachment processes aren’t official until approved by a majority of the House of Representatives in a vote that Pelosi hasn’t scheduled.

“This week, the president has admitted to asking the president of Ukraine to take actions which would benefit him politically. The actions of the Trump presidency revealed the dishonorable fact of the president’s betrayal of his oath of office, betrayal of our national security and betrayal of the integrity of our elections,” Pelosi said.

The controversy began when the Washington Post reported that a whistleblower claimed that Trump made a “promise” to a Ukraine official in return for investigating actions of former Vice President Joe Biden and his son, Hunter.

When the transcript released Sept. 25 failed to confirm that narrative, Schumer said the Department of Justice must make public the “complete, unredacted whistleblower complaint without further delay.”

Biden described Trump’s call as “a tragedy for this country that our president put personal politics above his sacred oath. He has put his own political interests over our national security interest, which is bolstering Ukraine against Russian pressure. … Congress must pursue the facts and quickly take prompt action to hold Donald Trump accountable.”

Biden’s main rivals for the Democratic Party’s 2020 presidential nomination were no less restrained in their reactions. Sen. Bernie Sanders (I-Vt.) tweeted shortly after the transcript’s release, saying, “Donald Trump is the most corrupt president in the modern history of this country.”

During a “Fox & Friends” interview, former New York City Mayor Rudy Guliani described the call controversy as “a political hit job,” not the work of a “whistleblower.”

Senate Judiciary Committee Chairman Lindsey Graham (R-S.C.) was nonplussed by the transcript, saying, “Impeachment over this? What a nothing burger. Democrats have lost their minds when it comes to President Trump.”