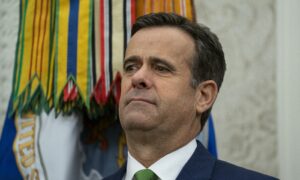 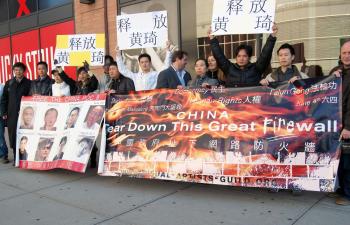 Protesters gathered across the street from the Chinese consulate on Sunday to demand the release of Huang Qi. (Catherine Yang/The Epoch Times)
US

Huang Qi was arrested in June 2008 for what the CCP called illegal possession of state secrets. Huang had published information on his Web site regarding the May 12 earthquake and the poorly built school buildings that led to the deaths of students, Huang has been detained for over a year. Huang Qi is to be sentenced in court Nov. 23 2009.

Jonathan Cao, from the Coalition for Citizen’s Rights, said Huang Qi was just doing a citizen’s job and investigating the student casualties in the earthquake as a journalist, a writer, and a citizen, and what he found was that shoddy school buildings were a result of dirty business between the government and big businesses. Cao said Huang angered the government in reporting this and would be sentenced in court on Monday.

“There is no independent judicial system. They are all controlled by the Chinese Communist Party,” Cao said. “Huang Qi was exercising a citizen’s right, a responsible citizen. He has been doing things for the families of the students. What crimes did he commit? He did not commit any crimes.”

“We demand the court release Mr. Huang Qi immediately and unconditionally,” he said.

Ann Noonan, chairman of the Visual Artists Guild and president of Free Church for China said this is not something that could happen in another country. She said if he was in New York and let New Yorkers know that deaths occurred because of poorly built buildings, he would be honored.

“This is a shameful fact that any government would imprison him,” she said. “The world needs to open its eyes. Our president just left the country—this is a kick in the teeth that our country goes to ask for human rights and the next day someone like this is sentenced.”

Steve Behar, an attorney, said he came to support this cause and let the Chinese government know they’re being watched even on this side of the world.

“I know that the trial was not a true and proper trial,” he said of Huang Qi’s imprisonment. “It was just a repeat of what the Chinese government has done over and over. I demand transparency. I demand his release tomorrow.”

A representative of Reporters Without Borders, Sam Trudeau, was present to show their support as well.

“Freedom of expression is a universal right,” he said. “He relayed information to the Internet and media. This is not a crime.”
Lu Jing Hua, a member of the Democratic Forum for China and participant of the Tiananmen Square protest in 1989, said what he did was help the parents who lost their children in the collapse of the buildings, because the government would not disclose any information at all. Hua requested that the government release Huang Qi immediately, and that all he did was talk freely. She also said the government was corrupt and anyone talking about freedom was put in jail.

Connie Wang said she did not know Huang Qi personally, but heard and read a lot about him and demanded he be released immediately.

“He visited the devastated area 14 times a month and provided the people with food,” she said. “The people suffered from losing their children so he released that information on the Web site. How can he be guilty?”