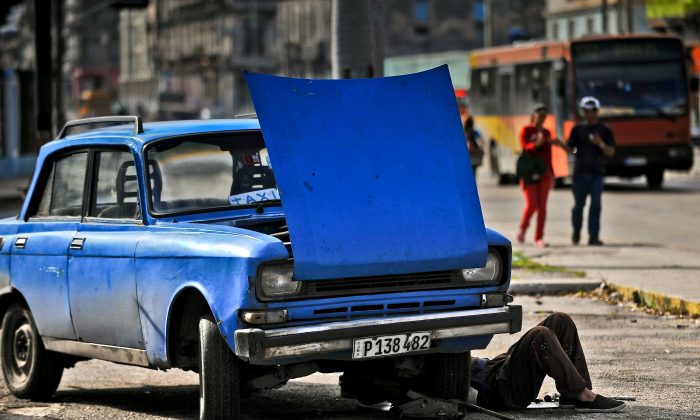 A man repairs his car in Havana, on January 11, 2016. A third of the cars riding in Cuba do so with mechanical failures and on destroyed roads. (YAMIL LAGE/AFP/Getty Images)
The Dead End of Communism

Détente No Help to Cubans

Two years after President Barack Obama relaxed America’s stance toward the communist regime in Cuba, citizens of the island nation are still waiting for any substantial benefits.

Although Obama managed to widen the crevice for U.S. companies in the Cuban market, Cubans have seen little improvement in their economic freedoms, while their political freedoms remain abysmal.

Obama started to drop restrictions on Cuba in December 2014 and over the next two years opened diplomatic relations and secured limited access to Cuba for U.S. travelers, telecommunication companies, and banks.

“I believe that we can do more to support the Cuban people and promote our values through engagement,” Obama said in a statement at the time.

“Neither the American, nor Cuban people are well served by a rigid policy that is rooted in events that took place before most of us were born.”

That, however, defies the reality of most Cubans, who face the same repressive policies they did 50 years ago.

The Cuban regime released 53 political prisoners as a token of the thaw, Human Rights Watch reported. But it detained over 8,600 for political reasons in 2015, according to Amnesty International.

“Things haven’t changed in Cuba,” said Fernando Menéndez, a Cuban immigrant and expert on the island’s economy at the Center for a Secure Free Society, a Washington-based think tank. “The economic situation in Cuba has gotten worse in the past couple of years.”

“They allow some … small private enterprises, but the state still owns the factors of production, the state still controls prices,” he said. “Just because you put tap shoes on an elephant doesn’t mean it can dance.”

A week before leaving office, Obama scrapped the “wet foot, dry foot” policy for Cuban immigrants that granted permanent residency to those who reached American soil.

Most Cuban expats despised the move, Menéndez said, as their fellow countrymen still face the repression that led the United States to grant them easy access to green cards to begin with.

Moreover, since many Cubans have been moving to the United States through South America in recent years, a large number may now be stranded on their way.

Possibly anticipating the policy change, increasing numbers of Cubans entered the United States in recent years, reaching a peak of just below 54,400 in 2015.

The situation, however, is more complicated. While there may be reasons to cancel the “wet foot, dry foot” policy, it has little to do with Cuba adopting more democratic values.

Many Cubans, especially the younger generation, said Menéndez, are less motivated by a desire for freedom and only move to the United States to make money. Some even come because American welfare benefits outpace those in Cuba, he said.

To give such immigrants green cards automatically, “I don’t think that’s fair to other immigrants who are trying to come through the door,” he said.