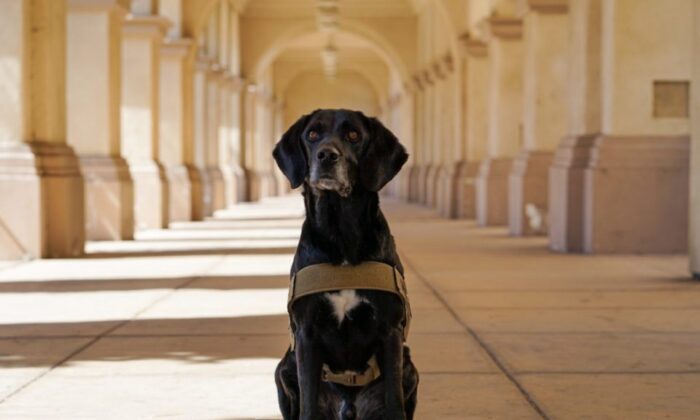 SAN DIEGO—Podder the detector dog was honored on March 23 as he heads into retirement after four years working for the San Diego County Agriculture, Weights and Measures Department.

The San Diego county staff organized a small ceremony at the Waterfront Park to acknowledge his work. His former coworker, Yeti, the county’s other detector dog, and Venus, a retired detector dog, and other officials were there to give him a pat on the back, a scratch on the head, and lots of treats and toys.

“In honor of Podder’s service, I’d like to present this Service Award for four years of county service,” said Ha Dang, commissioner/sealer for the Agriculture, Weights and Measures Department.

The Labrador and beagle mix has worked with his handler Kyle Moranton to intercept unmarked agricultural parcels that are shipped in violation of agricultural quarantine, or contain unwanted plant pests including insects, diseases, and other harmful organisms to agriculture.

Podder is six years old and is retiring due to a medical condition. He has been adopted into a loving home, Moranton said.

The California Department of Food and Agriculture started its Detector Dog Team program in 2009. The dogs sniff and identify unmarked parcels—considered a high-risk pathway for pests to enter the county. Dog teams conduct inspections at shipping facilities such as UPS, FedEx, and the U.S. Postal Service.

Dogs are trained to alert on packages that contain agricultural material such as plants, cuttings, fruits, vegetables, seeds, and soil. Those packages are then opened and checked for insects, diseases, or quarantines.

During his career, Podder made 426 visits to those facilities, where he found 728 plants in unmarked parcels, including 137 rated insect pests capable of causing serious harm to agriculture or were questionable, Moranton said.

Another San Diego County agriculture inspector is now training to become a dog handler and will join the department in the summer with a new detector dog.