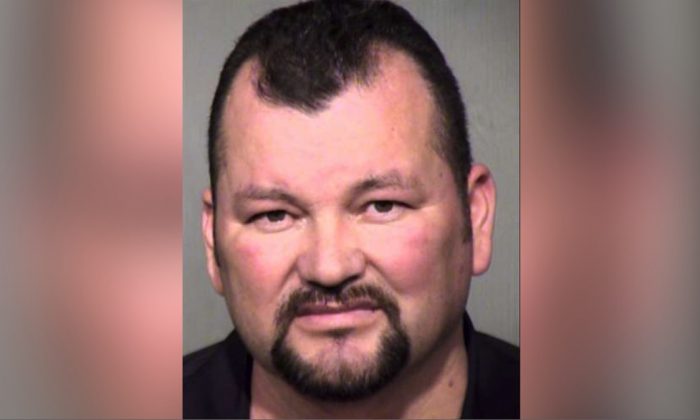 Adan Lopez-Perez, is seen in a booking photo following his arrest after DNA evidence linked him to sexual assaults in the 1990s. (Maricopa County Sheriff's Office)
Crime and Incidents

Police in Arizona have announced the arrest of an illegal immigrant accused of committing two sexual assaults in 1997.

The Chandler Police Department said in a statement cited by AZ Central that a DNA sample taken around the time of the crime was successfully matched decades later in April 2019 with DNA recently collected from 43-year-old Adan Lopez-Perez.

Lopez-Perez was required to submit a DNA sample as part of an investigation into his alleged illegal entry into the United States. He was in federal custody when the sample was collected.

According to AZFamily, Lopez-Perez was arrested on April 8 for his alleged involvement in the crimes.

Detectives collected DNA samples at both crime scenes, but it took five years for the two assaults to be linked to the same suspect.

But well over a decade would pass until Lopez-Perez—a Mexican national said by investigators to be in the United States illegally—would be connected to the crimes.

Detective Seth Tyler was cited by Arizona’s Family as saying that Lopez-Perez had nearly been released by the time detectives identified him as the suspect in the decades-old assaults.

“My understanding is he had been incarcerated for a couple months. I was told when our department was notified, he was four days away from being released,” Tyler told the publication.

“Our detectives actually worked around the clock,” he said. “The time, the clock….it’s ticking, because there’s a time where this individual could be released and we’d have to start the process all over again.”

According to AZ Central, citing court documents, Lopez-Perez was extradited to Maricopa County after he was released from federal prison.

Court paperwork cited in the report indicates a grand jury warrant asked for a $250,000 cash bond and electronic monitoring for the suspect.