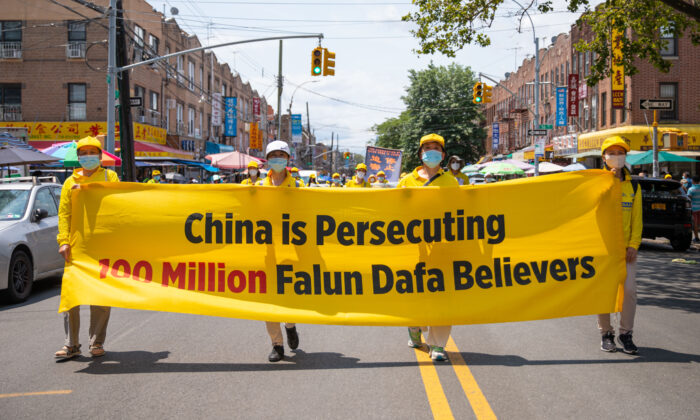 Falun Gong practitioners take part in a parade marking the 22nd year of the persecution of Falun Gong in China, in Brooklyn, N.Y., on July 18, 2021. (Chung I Ho/The Epoch Times)
China Human Rights

BROOKLYN, N.Y.—The two women’s lives have run in parallel with each other, despite their never having met before.

Both were born in China and later fled to New York after nearly two decades of sustained harassment and arrests. Both were detained while pregnant and were threatened with forcible abortion. And both declined to do the one thing the authorities wanted them to do: renounce their beliefs.

They are both adherents of Falun Gong, a meditation practice grounded in the principles of “truthfulness, compassion, and forbearance” that became hugely popular in China three decades ago. In 1999, after the Chinese Communist Party (CCP) labeled the practice a threat, Peng Zhaoli from Chongqing in southwestern China and Xia Haizhen from Shanghai—both in their 20s at the time—became targets for local police, along with the other 70 million to 100 million Falun Gong adherents all over China.

Peng and Xia, now both around 50, joined a nearly 1,000-strong parade in Brooklyn on July 18 to raise awareness about the persecution, which began 22 years ago this week. Too many around them have suffered similar mistreatment and pain, they said. And they want it to end.

The regime “arrested people by households if they didn’t give up the practice,” Peng said.

It was just months into Peng’s marriage, and not yet one month after she found out she was pregnant, when she was thrown into a police van and later put into a detention facility. For each adherent they caught, the policemen got 2,000 yuan ($308) in reward, a considerable sum at the time, according to Peng.

“Don’t think we have no way to deal with you because you’re pregnant,” a police officer warned Peng, who was then 30 years old. “We can abort your baby and sentence you to three years of forced labor.”

Peng knew he wasn’t bluffing. Local female adherents before her had lost their babies that way before being sent to prison, she said. The police stopped such threats after her family and friends publicized her case widely, and her mother, who was also detained at the time, went on a hunger strike in protest.

“Without their efforts, he could have perished long ago,” she said of her son, now a high school junior in New York.

That was in March 2001. Both her younger sister and mother, also practitioners, were in jail by then. Peng’s sister, who was two years her junior, served a 1 1/2-year sentence after being arrested by authorities in May 2000 when trying to obtain a marriage certificate, a procedure overseen by local police.

Peng’s mother, Huang Genhui, was also arrested around that time for going to Beijing to petition central authorities to end the persecution. Huang likewise was slapped with a 1 1/2-year jail term, despite having an eye condition that made her legally blind. She ended up being released the next October, three days after Peng’s son was born. While Huang was detained, she was forced into slave labor, including making bamboo mats and folding drug packing boxes and sanitary napkins.

Around the time that Peng’s mother was arrested, Xia, then six months pregnant, journeyed from Shanghai to Tiananmen Square to protest the persecution. Almost as soon as she had unfurled a banner and started shouting “Falun Dafa Is Good,” she was hurled into a police car and slapped in the face repeatedly. At the police station, when Xia refused to give her details, a young police officer, apparently drunk, grabbed her by the hair and slapped her multiple times, threatening that they would “kick her baby out.”

In May 2002, local officers and riot police broke into Peng’s family home with an ax to arrest Peng’s sister and mother again. They dragged her sister by her arms from the fourth floor down to the first, “not caring whether her head hit the stairs,” Peng said. Two layers of her clothes were ripped through on the stairs, exposing her undergarments, a sight witnessed by hundreds of bystanders outside as she was being dragged away.

Peng’s 6-month-old son was at home during the raid. Startled by the commotion, he kicked around in his bassinet.

The shock from that arrest proved too much for Peng’s father, the only person in the family of four who didn’t practice Falun Gong. While he had previously withstood police pressure to get a divorce, this time he caved. He told the family that he did it so that if the three were ever imprisoned again in the future, at least one person could be there to send them blankets.

Xia’s marriage broke apart during her fourth arrest, right before she came out of a three-year prison term.

“[The police] asked me: ‘Do you want your beliefs, or do you want your family? If you choose Falun Gong, you will have no family. If you give up Falun Gong, we won’t [force your husband to] give you a divorce,” she told The Epoch Times.

“To crush your faith and suppress those kindhearted people who believe in truthfulness, compassion, and tolerance, they go so far as to tear apart your family. In that moment, I really thought the Communist Party was evil to the core.”

Xia’s son was only three when police arrested her at the door of a fellow adherent’s home, where she was paying a visit. In September 2006, when Xia walked out of the prison, the son no longer recognized her. Looking at her face full of tears, though, the 6-year-old decided she was his real mother.

“I have called many people ‘Mom,’ but none were hugging me and crying,” she recalled him saying. “I can finally have my own mother like other kids.”

Her former husband took her to a stone bench in the park away from the crowd, “looked left and right” to make sure they weren’t being monitored, before bursting into tears, Xia recalled. He told her that the police threatened to make him a social outcast and block their son from going to school, joining the military, or working for the government if he refused to file the divorce papers. “I can never find someone as good as you,” he told her.

Peng left China in 2018, but couldn’t bring along her mother, Huang, whose jail time for practicing Falun Gong made her passport automatically disqualified for overseas travel, according to Peng.

She worries for her septuagenarian mother, whose vision is impaired. When Huang was in prison, it was Peng’s father who helped clip Huang’s nails during visits. Later that role had shifted to Peng. The police have withheld Huang’s pension since 2015, saying they won’t release it unless she signs statements renouncing her faith, which she refuses to do.

Huang now lives alone. Even though she always assures Peng that she is all right, Peng couldn’t control her tears when she recalled learning that her mother had been wearing a 19-yuan (less than $3) shirt for three years.

“Who is going to clip her nails? Even the simplest task of hanging clothes, how would she do that? She can’t even see,” she said, tears gliding down her face.

In 2008, Xia met her current husband, software engineer Luo Jiaolong, while producing underground literature to tell people about the severity of the persecution. The couple came to the United States in 2017, shortly after each came out of a multi-year jail term. Their son followed them in 2019.

“The CCP’s persecution is becoming more expansive, more cruel and secretive, and all of this started in 1999,” Luo said, noting that the regime has gone on to target Uyghurs in Xinjiang and other ethnic minorities.

“Unlike all the persecutions in history … the CCP doesn’t just destroy you physically, it also shatters you spiritually.”

At the tail of the parade were about 20 Chinese Christians who wanted to show their support for Falun Gong and call for an end to communism.

“Falun Gong’s pursuit of truthfulness, compassion, and tolerance leads to a better future for the world,” one of them, Yang Shisong, said. For the Chinese regime to suppress Falun Gong and its values, he said, shows that the Communist Party “is something dark, against humanity, and against civilization.”

“It’s the opposite of justice and light, and we must end it.”

A previous version of the article misstated Xia Haizhen’s name. The Epoch Times regrets the error.