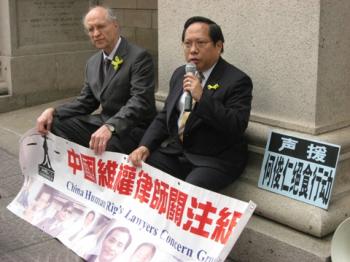 Matthew Robertson
Matthew Robertson is the former China news editor for The Epoch Times. He was previously a reporter for the newspaper in Washington, D.C. In 2013 he was awarded the Society of Professional Journalists’ Sigma Delta Chi award for coverage of the Chinese regime's forced organ harvesting of prisoners of conscience.
View profile
Follow
biggersmaller
Print
In response to a recent claim by the Chinese Communist Party (CCP) that human rights lawyer Gao Zhisheng has “gone missing,” Gao’s family and supporters have expressed suspicion at the claim and demanded to know his whereabouts.

The Hong Kong-based China Human Rights Lawyers Concern Group (CHRLCG) is pressuring the Chinese regime for information, and Gao’s wife, Geng He, has also spoken out.

The most recent information on Gao was from a Beijing police officer, who told Gao Zhisheng’s older brother, Gao Zhiyi, that Gao “got lost and went missing while out on a walk” on Sept. 25, 2009, while in police custody. Gao Zhiyi recently went to Beijing to try to get answers about the whereabouts of his brother. The officer Gao Zhiyi spoke too said he was one of the police who had abducted Gao in Feb. 2009.

This disclosure to Gao’s brother is the first statement made by Chinese authorities on Gao Zhisheng’s status since he was abducted last Feb.

BBC’s Chinese language service attempted to follow up the case, but was unable to reach Gao Zhiyi by telephone. Bob Fu, president of the U.S.-based ChinaAid Association, verified in an interview with BBCChinese.com that Gao Zhiyi had given such an account.

Kidnapped from his hometown in northern Shaanxi Province on Feb. 4, 2009, it has been 11 months since Gao was last heard from. His wife Geng He and two children were granted political asylum by the U.S. in March 2009. The family lives in fear for Gao’s safety; Gao’s 13-year-old daughter Gege was recently hospitalized for complications from mental duress.

Gao's wife thought the claims of Gao’s disappearance were “absurd,” given that he has either been under surveillance or imprisoned by the CCP for years now. “How could he get lost under such close surveillance?” Geng asked rhetorically in an interview with Sound of Hope radio. “He’s not a two-year-old kid; neither mentally handicapped. How could he get lost? … If he really got rid of the CCP’s control, how can it be possible that he didn’t contact his family?” Geng said.

The China Human Rights Lawyers Concern Group was also incredulous that he could “simply disappear,” given the level of surveillance he was under.

The group’s chairman, Albert Ho Chun-yan, has staged a 24-hour hunger strike in recognition of Gao’s plight each Wednesday since March 18, 2009. The observance is now in its 44th week. John Clancey, the secretary of the Concern Group, also participates in the hunger strike. In an online petition they urge people from all walks of life to “join in solidarity in the defense of human rights lawyers and activists.”

A few days after Gao was kidnapped last February, his article titled “Dark Night, Dark Hood and Kidnapping by Dark Mafia” emerged. The article details Gao’s experience of brutal torture that lasted for close to two months at the hands of Chinese police.

The memoir includes statements like: “Four men with electric shock prods began beating my head and all over my body. Nothing but the noise of the beating and my anxious breathing could be heard. I was beaten so severely that my whole body began uncontrollably shaking,” and “They used toothpicks to pierce my genitals. I can’t use any language to describe the helplessness, pain, and despair that I felt then. At a point like that, language and emotion do not have the power to explain. Finally I made up stories, telling them about affairs that I had with four women. After more repeated torture, I had to describe in detail how I had sex with each of these women. This continued until dawn the next day.”

Gao, a Christian by faith, published three open letters in 2005 calling on Chinese authorities to stop the persecution of Falun Gong, a spiritual group that has been targeted since 1999. In February 2006 he launched a relay hunger strike to demand that the regime stop persecuting human rights activists in China.

Since then, he and his family were also targeted by the regime, including being tailed, harassed, kidnapped, monitored, and beaten.