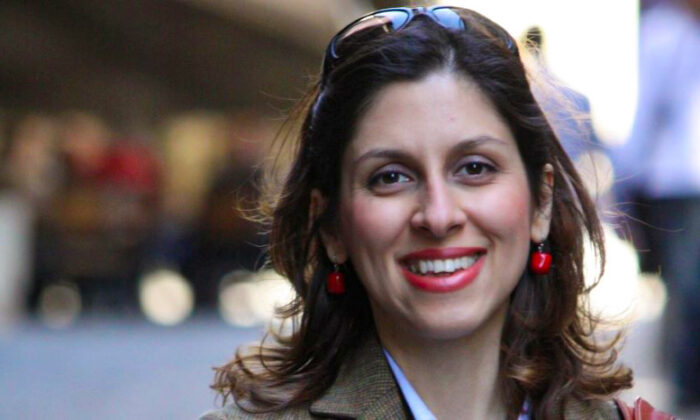 British-Iranian aid worker Nazanin Zaghari-Ratcliffe is seen in an undated photograph handed out by her family. (Ratcliffe Family Handout via Reuters)
UK

British-Iranian mother Nazanin Zaghari-Ratcliffe is about to leave Iran where she has been detained since 2016, according to her MP and her legal representative.

Zaghari-Ratcliffe, 43, a project manager with the Thomson Reuters Foundation, was arrested at a Tehran airport in April 2016 as she prepared to head back to Britain with her daughter after a family visit. She was later jailed after being convicted of plotting to overthrow Iran’s clerical establishment, and was not allowed to leave Iran even after her release from prison.

Tulip Siddiq, her MP in London, wrote on Twitter on Wednesday morning, “Nazanin is at the airport in Tehran and on her way home.”

According to her lawyer Hojjat Kermani, another British-Iranian detainee, Anousheh Ashouri, who was sentenced to 10 years in jail in 2019 for allegedly spying for Israel’s Mossad intelligence agency and two years for “acquiring illegitimate wealth,” has also been allowed to leave Iran.

There have been signs of progress in recent days in negotiations between the UK and Iran over Zaghari-Ratcliffe’s case.

On Tuesday, Siddiq said Zaghari-Ratcliffe’s British passport had been returned.

While details of the negotiations remain unclear, it is possible they are linked to a £400 million ($523 million) debt dating back to the 1970s owned to Iran by the UK.

The UK government accepts it should pay the “legitimate debt” for an order of 1,500 Chieftain tanks that was not fulfilled after the shah was deposed and replace by the Islamic regime.

Foreign Secretary Liz Truss told Sky News on Wednesday that it is a “priority to pay the debt that we owe to Iran.”

But the Iranian regime remains under strict sanctions, which has complicated efforts to repay the money.

Human rights organisations have welcomed the news that the British-Iranian detainees are on their way home.

Sacha Deshmukh, Amnesty International UK’s chief executive, said: “This is fantastic news, but it hasn’t come a moment too soon. Nazanin and Anousheh should never have been detained in the first place—they were both jailed on trumped-up national security charges, a familiar tactic in Iran.”

He added, “It’s been clear for years that the Iranian authorities are targeting foreign nationals with spurious national security-related charges to exert diplomatic pressure, and it’s more important than ever that Britain works multilaterally to combat this insidious practice.”

Redress, an anti-torture group which has campaigned for Zaghari-Ratcliffe to be freed, said it congratulated the UK government on “finally negotiating her release.”

Director Rupert Skilbeck said, “We are incredibly relieved that Nazanin will finally be reunited with her family in the UK after a horrific six-year ordeal.”

“In celebrating her release, we must not forget the deep and continuing injustice perpetrated by Iran. Iran’s systematic practice of holding foreign nationals hostage for diplomatic leverage cannot be allowed to continue,” he said.