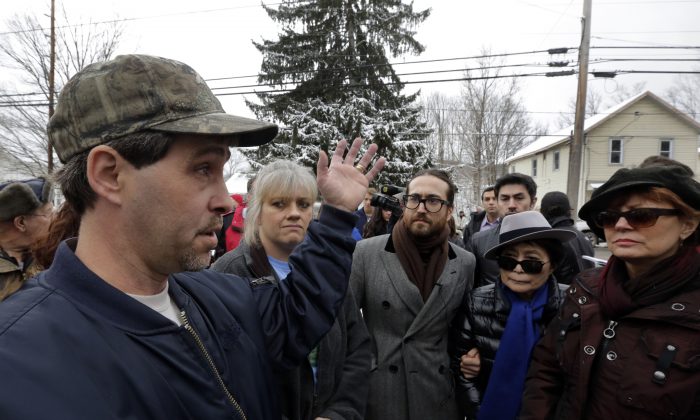 L to R) Matthew Manning speaks with Tammy Manning, Sean Lennon, Yoko Ono, and Susan Sarandon about methane pollution in their water on Jan. 17, in Franklin Forks, Pa. The Mannings blamed hydraulic fracturing for the pollution, however, a study released by the Pennsylvania Department of Preservation on April 29, 2013, said the methane was naturally occurring. (AP Photo/Richard Drew)
New York

High levels of methane in Susquehanna County, Pa., cannot be to attributed to fracking, yet claims impossible to verify
By Kristen Meriwether

Susquehanna County, Pa.—made famous from Josh Fox’s documentary film “Gasland”—is back in the forefront of the hydraulic fracturing debate with pro-drilling activists claiming victory and at least one family still desperate for answers about their undrinkable water.

Hydraulic fracturing, also known as fracking, is the process of breaking up shale rock thousands of feet underground with water and chemicals, and then propping open the fissures with sand in order to extract natural gas.

On Monday, the Pennsylvania Department of Environmental Protection (DEP) released a statement regarding the conclusion of their 16-month investigation into high methane levels in three private water wells in Franklin Forks Township.

Natural gas is largely comprised of processed methane. Methane is naturally occurring in some water, but high levels of methane can make water unsuitable for drinking. With Pennsylvania being the leading state in the region to embrace fracking, conclusions about the environmental impact on water in the region are being closely watched by New Yorkers. New York state currently has a moratorium on the practice while further studies are being conducted.

The DEP statement concluded the methane was of similar makeup to that found in Salt Springs State Park—where naturally occurring methane has been documented back to 1902—and not of the same make up as the hydraulic fracturing wells nearby.

“Why is Salt Springs all of a sudden migrating all at once right after drilling starts?” Matthew Manning, whose home was a part of the study, said in a video shown on WBNG News in Binghampton, Pa.

The Manning family, who has been without drinkable water inside their house since 2011, wonders if WPX, the gas company whose wells are nearby, will continue to pay for water delivery to their house.

“We couldn’t sell the house with a water buffalo and no water supply, so we’re running out of options right now,” Matthew’s wife Tammy Manning said, according to WBNG News.

The statement seemed like a straightforward victory for the pro-gas camps, however, for geologists familiar with the methane rich region, there was a simple piece missing—the report.

The DEP would not release the report citing homeowner privacy issues, instead issuing a four-paragraph statement of the conclusions. The Epoch Times asked for a copy with the names and addresses redacted to protect the homeowners, however, the request was denied.

A geologist in New York state refused to comment on the record about the benchmark study without seeing the methodology, saying it was not a straightforward issue, especially in methane-rich Pennsylvania.

Methane generally comes in two forms: biogenic, produced by degrading organic matter, and thermogenic, which is the type desired for natural gas processing.

A scientists can discern between the two based on their make-up, with biogenic typically coming from shallow depths, and thermogenic coming from deep pockets, like in the Marcellus Shale.

It is not, however, absolute.

Robert Jackson, an environmental scientist at Duke University who spent time in Franklin Forks and collected samples for his research, said some methane in Salt Springs State Park is thermogenic, however, it is discernible from Marcellus Shale methane.

Jackson was hesitant to draw a conclusion about the statement without seeing the study with the methodology. “I am not saying the DEP is wrong, but I do not feel DEP has given us enough information to say they are right,” Jackson said on Tuesday.

Jackson said he would like to see if ethane and propane were also tested and/or detected. These are gases, which are not found to be naturally occurring and can be good indicators of fossil fuels from deep underground. This would help investigators to better determine the origination of the gases.

Much of the fuss about shale gas development has revolved around fracking, but before the well is fracked, a hole must be drilled, which may sometimes pass through layers of biogenic methane.

The Manning’s reported methane in their water two days prior to the WPX well being fracked, but after the hole had been drilled.

Terry Engelder, the geoscientist at Penn State University who put a number on how many cubic feet of natural gas the Marcellus Shale holds, questions the timing of the Manning’s complaint.

“If someone is going to complain about shallow methane, it should have happened as that hole is being drilled,” Engelder said. “In the case of the Franklin Forks folks, the complaint was not issued until just before the wells were being fractured.”

The statement issued by the DEP does not say if the methane found was biogenic or thermogenic, calling it “naturally occurring.” Without the study, it is not known exactly what kind of methane was in the well, other than it matched the type in Salt Springs.