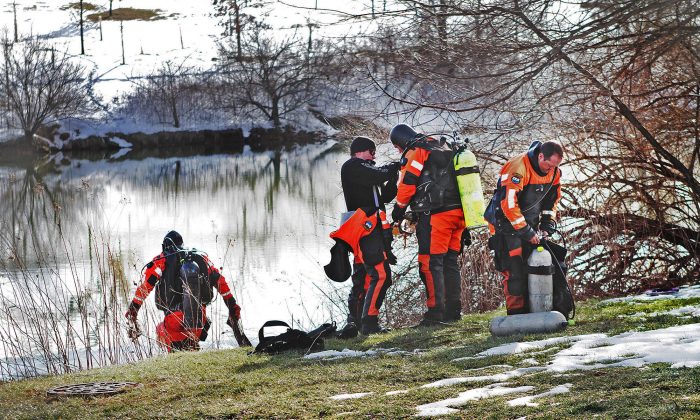 In this Jan. 31, 2016 photo, troopers prepare to search the Duck Pond in Blacksburg, Va. (Edmee Rodriguez/The Roanoke Times via AP)
Crime and Incidents

BLACKSBURG, Va.—David Eisenhauer and Natalie Keepers were promising engineering students at Virginia Tech, described by those who knew them as ambitious and focused. Nicole Madison Lovell was an energetic 13-year-old who bore emotional and physical wounds, suffering from bullying over the scars from her liver transplant. How their lives intersected in tragedy remains a mystery.

Investigators have released no details about what happened to Nicole after she climbed out her bedroom window last week, including how, when or where she was killed. Neither have they announced what connected her to a college freshman five years older, or how Keepers allegedly got involved in hiding her body.

Eisenhauer, 18, is charged with kidnapping and murdering Lovell, whose body was found by police Saturday just across the state line in Surry County, North Carolina. Keepers, 19, is charged with improper disposal of a body and accessory after the fact in the commission of a felony.

The students made their initial court appearances Monday. They said little, and their lawyers have declined to comment.

Blacksburg police said they have evidence showing Eisenhauer knew the girl before she disappeared Wednesday but have not elaborated.

“Eisenhauer used this relationship to his advantage to abduct the 13-year-old and then kill her. Keepers helped Eisenhauer dispose of Nicole’s body,” a police statement said.

The arrests of the two engineering majors shocked people who knew them in high school in Maryland, where they lived near each other. Neither had prior criminal records, police said.

“We had no reason to think he would be unsuccessful in his goals because he was very focused,” said Principal James LeMon at Wilde Lake High School, where Eisenhauer graduated last year.

Nicole didn’t like going to school because girls called her fat and talked about her transplant scars. “It got so bad I wouldn’t send her,” Weeks said, but the bullying continued on social media.

Davy Draper, a close family friend, called Nicole an energetic and outspoken girl who got along with everyone.

“She was an awesome little girl. She was an angel here on Earth, and she’s an angel now,” Draper said Sunday.

Drake said privacy laws prevent her from commenting on Nicole’s experience, but she said the school has anti-bullying and Internet safety programs.

On the Virginia Tech campus, state police divers searched a pond but authorities would not say what they were looking for.

Abbey Workmeister lives in the same dormitory as Eisenhauer — Ambler Johnston Hall, the co-ed residence hall where the first two people were killed in the 2007 campus massacre that left 32 dead.

“From what we’ve heard, he really stayed in his room a lot,” Workmeister, a freshman biochemistry major from Cumberland, Maryland, said of Eisenhauer.

Logan Fry, a sophomore hospitality major from Roanoke who lives on the same floor as Eisenhauer and also ran track in high school, said Nicole’s death and the arrest of a dorm neighbor was frightening.

“Like, it definitely could have been me,” she said.

A number listed for Eisenhauer’s parents in Columbia, Maryland, rang busy. A message left at Keepers’ home in Laurel, Maryland, was not returned.