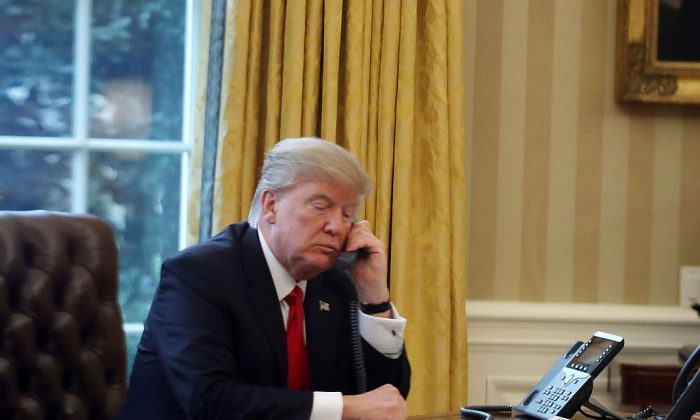 WASHINGTON, DC - JANUARY 29: President Donald Trump is seen through a window speaking on the phone with King of Saudi Arabia, Salman bin Abd al-Aziz Al Saud, in the Oval Office of the White House, January 29, 2017 in Washington, DC. On Sunday, President Trump is making several phone calls with world leaders from the Oval Office. (Photo by Mark Wilson/Getty Images)
Politics

WASHINGTON—President Donald Trump tweeted that a plan for the U.S. to admit some asylum seekers now held near Australia is a “dumb deal.”

What’s the deal about?

Late last year, the Obama administration agreed to take asylum seekers who had been trying to make their way to Australia.

The mostly Muslim immigrants are being held in camps on the Pacific island nations of Nauru and Papua New Guinea. Australia, which has been dealing with an influx of thousands of migrants fleeing conflict and poverty, won’t admit them and is instead paying for them to be held in the improvised island camps.

The Obama administration agreed to review the cases of about 1,300 asylum seekers and also consider the refuge requests of about 370 other people who came to Australia seeking medical treatment, then refused to return to the camps. It is unclear exactly how many refugees the U.S. agreed to ultimately accept.

Human rights groups have criticized Australia for its treatment of asylum seekers who have tried to reach Australia by sea. When the agreement with the U.S. was announced in November, the U.N. Special Rapporteur on the Human Rights of Migrants Francois Crepeau said it was a “good start” to finding a way to close the detention camps.

U.S. lawmakers have criticized the agreement and asked Homeland Security and State Department officials to provide more details before anyone is admitted. In a letter to the agencies, Sen. Charles Grassley, the Senate Judiciary Committee chairman, and Rep. Bob Goodlatte, the House Judiciary Committee chairman, said the refugees being considered for relocation were from Iran, Sri Lanka, Pakistan, Afghanistan, Somalia, Iraq, Sudan or stateless.

An executive order signed by Trump Friday would seem to bar these refugees at least temporarily. It blocks entry to the U.S. for anyone from Iran, Iraq, Syria, Libya, Sudan, Somalia and Yemen for at least 90 days. The order also suspends the U.S. refugee program for four months.

Australian Prime Minister Malcolm Turnbull insisted Thursday that the deal was still on, despite Trump’s tweet Wednesday that it was a “dumb deal” that he would review.

The State Department said Thursday that the agreement will stand “out of respect for close ties to our Australian ally and friend.”

White House spokesman Sean Spicer said Thursday the refugees held by Australia would be subject to “extreme vetting” before they could enter the United States. He provided no details about the vetting process.

Questions about the agreement’s fate came after reports of a contentious call between Trump and Turnbull. The Washington Post reported Wednesday that Trump angrily dubbed the agreement “the worst deal ever” and accused Turnbull of seeking to export the “next Boston bombers”—a reference to Tamerlan and Dzhokhar Tsarnaev, brothers born in Kyrgyzstan, who set off bombs at the 2013 Boston marathon.