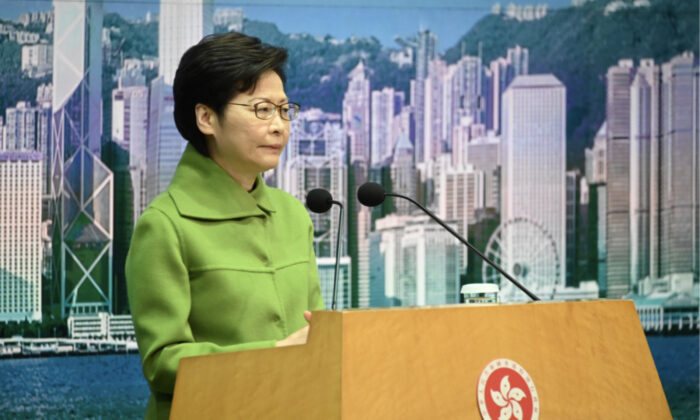 “It’s difficult for me to go out now. I haven’t been out of the house. I haven’t been to the shopping mall. I can’t go to the hair salon. I can’t do anything because my whereabouts will be shared on social media. Once it spreads out, there will be a huge group of… young people waiting for me.”

This was once said by Carrie Lam, the soon-to-be-ousted Chief Executive of Hong Kong.

The above passage is an excerpt from a recording of Carrie Lam at a closed-door business conference, which Reuters had obtained at the time and published on Sept. 2, 2019.

In the meeting, Lam acknowledged the “unforgivable havoc” over the amendment of the Fugitive Offenders Ordinance, commonly known as the “extradition law”. Lam then asked for forgiveness from those present in the closed-door meeting, and said, “If I had a choice, the first thing I would do would be to resign and deeply apologize.”

However, the first female chief executive of Hong Kong, who is about to part ways with Government House on July 1, denied the talk of an apology recently.

In an exclusive interview with Bloomberg on June 14, 2022, Carrie Lam unequivocally refuted it when asked if she would apologize to Hongkongers for anything at all during her term. Lam said she would only apologize to her husband and sons.

“That is because they have made sacrifices for me to serve Hongkongers and help build the city as part of the country,” Lam said.

At that moment when Lam answered the question, some wondered if she still remembered her “heartfelt” speech back then.

In 1981, Lam was escorted by the then-British government to study at the University of Cambridge in the United Kingdom. During her time in the UK, she met her husband, Lam Siu-por, a high-achieving mathematics graduate.

In 1984, Carrie Lam Cheng Yuet-ngor and Lam Siu-por got married in Hong Kong and gave birth to their two sons, Jeremy Lam Jit-si and Josh Lam Yeuk-hay. The entire family held British citizenship until 2007, when Lam was appointed as the Secretary for the Development Bureau and renounced her British citizenship.

Lam was also nicknamed “777”, due to the number of votes she got in the small circle election and the enormous support backed by the Chinese Communist Party (CCP). In addition, Lam said during her candidacy that she would continue to follow the failing policies which were set up by the former chief executive Y.C. Leung Chun-ying, who is just as unpopular. Hence some also called Lam “C.Y. Leung 2.0.”

During an election debate forum, Carrie Lam announced in front of seven million Hongkongers, “I will resign if the mainstream opinion of Hongkongers makes it impossible for me to continue serving as their chief executive.”

In May 2019, at the bidding of the CCP authorities, Carrie Lam shoved forward the draft amendments of the Fugitive Offenders Ordinance, also called the 2019 Extradition Bill, sparking major public outrage.

On June 9, 2019, over 1.03 million people in Hong Kong took to the streets to protest. Since then, there has been an anti-extradition movement in Hong Kong that attracted global attention in its fighting for democracy and freedom.

However, during the last Q&A Session in the Legislative Council on June 9, 2022, Carrie Lam declared, “I have never thought of quitting, or regretting the decision of becoming the Chief Executive in the past five years… I have produced a report card which I can be proud of, which marks the end of my career of 42 years as a public servant.”

Lam’s Days Will be Tough

On June 30, 2020, Chinese regime forcefully enacted the Hong Kong National Security Law in Hong Kong (HKNSL), which aroused the attention of the international community. The U.S. government imposed a series of sanctions on 11 Chinese and Hong Kong officials in August 2020, who undermined Hong Kong’s autonomy. Carrie Lam became the first chief executive of Hong Kong to bear the brunt of the sanctions.

In Nov. 2020, Lam revealed in an interview with Hong Kong’s i-CABLE News Channel, “Since the U.S. sanctions, no bank has dared to provide services to me; I cannot use any credit card and mobile payment—and because I don’t have a bank account, the Hong Kong government can only pay my salary in cash. So there is a large amount of cash stored in my home.”

This is going to cause Lam headaches as to how she can move and keep the money safely when she moves out of Government House.

“Let’s wait and see how Carrie Lam is going to live and behave from this point on.” Politics and Economy Commentator Simon Lee Shi-ming said on Epoch Times’ program, Precious Dialogues.

Some said Carrie Lam might join her family in Beijing after leaving office. However, she stated that Hong Kong is her home.

Some pro-Beijing people said that the Beijing government was going to give Carrie Lam a set of Siheyuan, which is a set of luxurious courtyard houses. However, Lam is too scared to go to Beijing. It was said that Lam would rather become a “naked official,” as she did not want her husband and sons staying in Beijing and being controlled by the mainland government.

Other than bank accounts, Carrie Lam does not have properties in Hong Kong either. Lam had previously declared to the Hong Kong government that she had two properties in Cambridge, UK, as well as one in Suzhou China. However, they were all sold by the time of the filing in Sept. 2014.

According to her Register of Personal Interests, published on the Hong Kong government’s official website, Carrie Lam currently possesses only one residence located in Zhongshan, China. The property is owned by Carrie Lam’s husband as a primary residence.

On June 11, 2022,  Carrie Lam shared in an exclusive interview with RTHK that she would continue to live in Hong Kong after leaving office; Lam also said that Hong Kong is her home. She would visit The Palace Museum, listen to Cantonese opera and enjoy the views of Victoria Harbour during her free time.

Commentator Simon Lee Shi-ming described Carrie Lam as a “useful fool,” saying that she is neither a member of the CCP nor close friends with the mainland regime. Carrie Lam has been a useful tool since her college years. At that time, there was a large group of the Greater China nationalists, who genuinely supported the ideals of China’s reunification, thinking they were passionate for the people and the country, for the incredible cause of the great rejuvenation of the Chinese nation.  Unfortunately, they were only seen as supporters of the CCP regime.

Simon Lee elaborated on the useful fool, “When a useful fool has lost his or her use, only the ‘fool’ remains.”

Current Affairs Pundit Gi Da conveyed that Carrie Lam is only a loyal executioner of the Communist Party’s orders. She can’t go anywhere once she leaves the office, except to stay in Hong Kong.