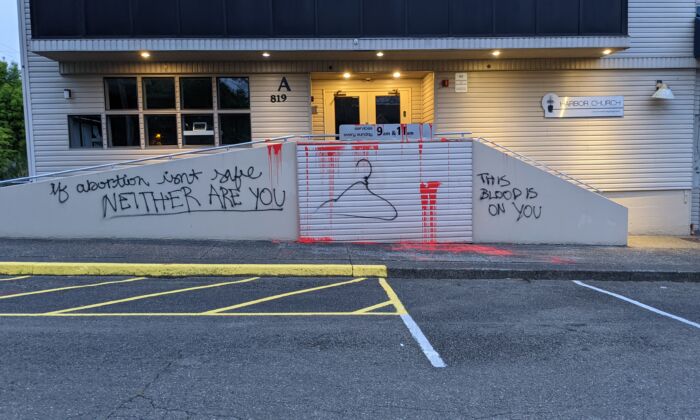 Shadowy pro-abortion group Jane’s Revenge has orchestrated a nationwide campaign of destruction and vandalism against pro-life groups for which police have yet to make an arrest.

The group’s attacks began on May 8 in Madison, Wisconsin, where Jane’s Revenge members torched the headquarters of pro-life group Wisconsin Family Action.

“They had Molotov cocktails. They threw one against the window, and the window didn’t break. So then they broke a window and threw a Molotov cocktail into my office,” said Julaine Appling, Wisconsin Family Action’s president.

When the Molotov didn’t destroy the office enough, the attackers started a fire in Appling’s office using her books.

“The thing that I am missing the most is all the books they burned,” Appling said. “Some of those might at this point be irreplaceable.”

“We are forced to adopt the minimum military requirement for a political struggle,” its anonymous writer said in an online manifesto.

Since then, attacks on pro-life organizations have only escalated. As of today, at least 28 pro-life groups from Anchorage, Alaska to Hollywood, Florida have been attacked.

The attacks were prompted by the leak of a draft Supreme Court opinion overturning Roe v. Wade, a decades-old decision that prohibited states from imposing restrictions on abortion.

Who Is Jane’s Revenge?

The attack on Wisconsin Family Action’s office was the first one claimed by Jane’s Revenge.

The only public channel of communication from Jane’s Revenge is a page on NoBlogs, an anarchist blogging site.

In its first post on Sunday, May 8, the group announced a “declaration of war” against pro-life groups. It demanded the disbandment of all American pro-life groups in the next 30 days.

“As you continue to bomb clinics and assassinate doctors with impunity, so too shall we adopt increasingly extreme tactics to maintain freedom over our own bodies,” the group wrote.

This “First Communiqué” also announced that Jane’s Revenge had “not one group, but many” in “every city.”

A second manifesto on May 30 called for a “Night of Rage” on the night the Supreme Court releases the Dobbs v. Jackson verdict.

It asked for “courageous hearts to come out after dark.”

It also claimed that Jane’s Revenge had a “few hundred people” but needed more members.

It’s unclear whether Jane’s Revenge has a centralized leadership, cells across the country, or is simply a slogan that unconnected pro-abortion radicals use when attacking pro-life clinics.

Jane’s Revenge attacks tend to have cursive graffiti reading, “Jane Was Here,” “Jane’s Revenge,” anarchist symbols, the number “1312,” or some version of the phrase “If abortions aren’t safe then neither are you.”

Federal and local police have yet to arrest anyone for attacking a pro-life clinic since the first attack on May 8.

Attackers on the Loose

The Epoch Times has interviewed seven of the 28 pro-life organizations attacked since the Dobbs v. Jackson leak. Several attacked organizations refused to be interviewed because they feared a higher profile would bring more attacks.

But all organizations that spoke with the Epoch Times said they wouldn’t quit because of the attacks.

The vast majority of groups contacted by the Epoch Times said they had video of their attackers and were working with the police. Several clinics that received threats from Jane’s Revenge have also passed on information to the FBI.

In Long Beach, California, a woman entered His Nesting Place, a church and maternity care home, according to senior pastor Al Howard. The woman screamed obscenities, tore up a Bible, and threw a vase belonging to the church.

While congregants moved her out of the church, the woman attempted to open her backpack, Howard said.

“It dawned on us later that she possibly might have had a weapon,” he said.

Both security and phone cameras caught the attack, Howard said. While she was in the church, the attacker said she was local. Later, she shouted and threatened outside the church again.

But police still haven’t caught her, he said.

“She said, ‘I’m not finished with you. I’ll be back and I’m going to burn this place to the ground and all of you in it,’” Howard said.

Police didn’t set up a guard on the church while the attacker remained at large, he said.

Compass Care Pregnancy Services in Buffalo, New York suffered the worst attack so far from Jane’s Revenge, according to its director Jim Harden.

The damage will require a full rebuild, he said. But due to the high number of donations the clinic has received, he plans to make a new and expanded building.

“Let’s not only rebuild, let’s build it bigger,” Harden said.

Police and the FBI have told Harden that they have leads on multiple perpetrators, but have yet to arrest a suspect, he said.

“Government failure to act is conspicuous,” Harden said. “Their job is to protect all citizens equally, not just the ones that agree with them.”

Thomas Glessner, the president of the National Institute of Family and Life Advocates (NIFLA), said he believes that stopping violence by pro-abortion extremists isn’t a priority for law enforcement.

NIFLA connects over 1,600 pro-life groups nationwide. Jane’s Revenge has twice firebombed one of NIFLA’s clinics in Portland, Oregon. Glessner said he doubts that police want to catch those responsible.

He’s not the only leader disappointed in police efforts to combat Jane’s Revenge.

In Wisconsin, Appling started offering a reward for information leading to the arrest of the people who attacked her clinic. It has been over a month since the attackers struck.

“We thought it was appropriate to see if there was any way we might find someone who saw or heard information about this attack,” she said.

At Trotter House, a pro-life clinic in Austin, Texas, vandals took video of themselves vandalizing the clinic’s property, then posted it online, said clinic director Lori DeVillez. But as of yet, police have made no arrests. She blamed the lack of response on low police department funding.

Over 120 congressmen have signed a letter demanding a Department of Justice investigation into Jane’s Revenge.

Despite the wave of violence against their political opponents, most nationwide pro-abortion groups haven’t made public statements condemning the violence.

The Epoch Times contacted Planned Parenthood, the National Abortion Rights Action League (NARAL), and the American Civil Liberties Union (ACLU) to ask for a reaction statement to the nationwide attacks on pro-life groups. None replied by press time.

One of the few groups to make a statement about the attacks was pro-abortion group ReproAction.

House Speaker Nancy Pelosi (D-CA) refused to condemn the attacks on pro-life groups when reporters asked her at a press conference.

“Well, let me just say this: a woman has a right to choose, to live up to her responsibility, it’s up to her doctor, her family, her husband, her significant other, and her God. This talk of politicizing all of this, I think, is something uniquely American and not right,” Pelosi said.

According to Glessner, pro-abortion groups support the attacks. Glessner added that NIFLA has condemned violent attacks against abortion doctors in the past.

Last week, pro-abortion Shut Down DC activists Patrick Young and Nadine Bloch told members of their group they don’t condemn those who use violence to support abortion.

“If you want to do property destruction, do it in secret. If you’re doing it publicly, you’re probably an infiltrator,” Bloch said. “There’s no condemnation of bringing the system down.”