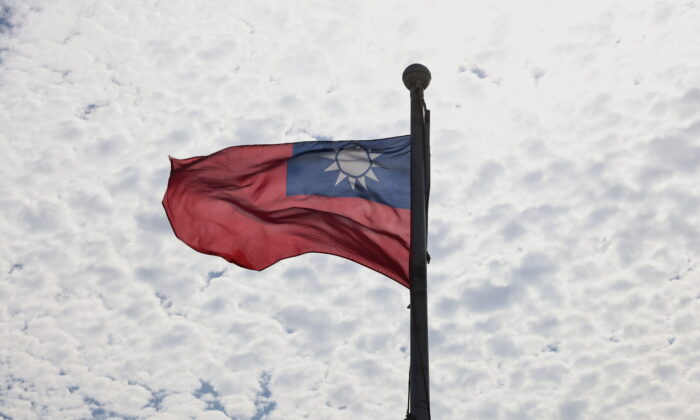 A Taiwanese flag flaps in the wind in Taoyuan, Taiwan, on June 30, 2021. (Ann Wang/Reuters)
Viewpoints

The United States can save Taiwan from Chinese invasion by promising to destroy it, or at least its chipmaking capability, according to an article in Parameters, the U.S. Army War College’s quarterly. In “Broken Nest: Deterring China from Invading Taiwan,” Air University’s Jared McKinney and Colorado State University’s Peter Harris argued that Taipei and Washington should make the island “unwantable.”

“The United States and Taiwan should lay plans for a targeted scorched-earth strategy that would render Taiwan not just unattractive if ever seized by force, but positively costly to maintain,” they wrote in the U.S. Army War College’s most-downloaded paper of 2021. “This could be done most effectively by threatening to destroy facilities belonging to the Taiwan Semiconductor Manufacturing Company, the most important chipmaker in the world and China’s most important supplier.”

McKinney and Harris explain the title of the article by citing a Chinese proverb: “Beneath a broken nest, how can there be any whole eggs?”

Americans design the world’s fastest chips, but make none of them—Taiwan does.

The island is by far the world’s leader in the manufacture of semiconductors. One firm, the Taiwan Semiconductor Manufacturing Company (TSMC), makes more than half of the planet’s made-to-order chips and about 90 percent of its advanced processors. TSMC and Samsung Electronics are the only two companies that can produce 5-nanometer chips, the most advanced chips anywhere.

“Today, if you control access to microchips then you can control the world,” Bob Anderson wrote on the Federalist site.

Taiwan is so important that people there talk about their semiconductor industry providing a “silicon shield” against a Chinese invasion.

The shield argument, whether it’s being made by Taiwan or the United States, is wishful thinking. Yes, Beijing has spectacularly failed to develop its own semiconductor industry, and yes, China is critically reliant on Taiwan’s chips. Yet Chinese ruler Xi Jinping isn’t going to be deterred by the prospect of losing TSMC or, for that matter, all of Taiwan’s semiconductor industry. He’ll take the island even if he has to turn it into a radioactive slab that’s uninhabitable for a thousand years.

Early in his rule, Xi based his legitimacy on taking Taiwan.

“Looking further ahead, the issue of political disagreements that exist between the two sides must reach a final resolution, step by step, and these issues cannot be passed on from generation to generation,” he declared in October 2013.

“China wanted Taiwan long before TSMC was churning out chips, and would want it even if TSMC had never existed,” Michael Turton, a long-term Taiwan resident and Taipei Times columnist, pointed out this month in a rebuttal to Broken Nest. “It wants Taiwan because, like Nazi Germany, it is an expansionist power driven by racist ideologies and racist history.”

Moreover, McKinney and Harris are wrong on another fundamental point. They argue that it would be hard to slow down Xi with conventional deterrence strategies.

They’re wrong because, among other things, China’s regime is extraordinarily casualty-averse. Xi knows that an invasion of the island would be unpopular among most Chinese citizens, especially if their sons or daughters were killed or maimed in the effort. Unless under extreme duress, he isn’t about to do anything that could lead to the end of communist party rule in China.

Therefore, McKinney and Harris totally miss the mark when they argue that an arms race with China would be counterproductive.

Richard Fisher, a China military analyst with the International Assessment and Strategy Center, told Gatestone that it’s possible for the United States to win such a contest with China. Fisher is correct. The Chinese military is arms-racing not just with the United States, but with much of the region, especially Japan and Australia.

McKinney and Harris, although arriving at the wrong conclusions, at least deserve credit for tackling one sensitive issue.

“To be clear, there is no conceivable way that Taiwan or the U.S. could respond to a Chinese invasion without imposing costs and risks upon the people of Taiwan,” they wrote on the Taiwan News website. “This is an inescapable reality.”

It is. The people of Taiwan “must start thinking about the unthinkable.”

So must Americans. What is now unthinkable to them?

That would be Taiwan being in Beijing’s hands. For more than a century, the United States has drawn its western defense perimeter off China’s coast, and Taiwan is smack dab in the middle of that critical line, where the South China and East China seas meet. Taiwan also protects the southern flank of the U.S. “cornerstone” ally in East Asia, Japan.

At a time when China’s Communist Party is attacking democracies, Washington can’t allow Beijing to absorb any one of them, even the ones that aren’t the home to the world’s leading chipmakers.

“Destroying Taiwan’s democracy is essential to giving China’s Communist Party license to destroy all other democracies,” Fisher said. “Killing Taiwan is the first but most necessary step toward hegemony.”

If the United States came to the rescue of Taiwan, it wouldn’t be defending just the island: It would be defending itself.