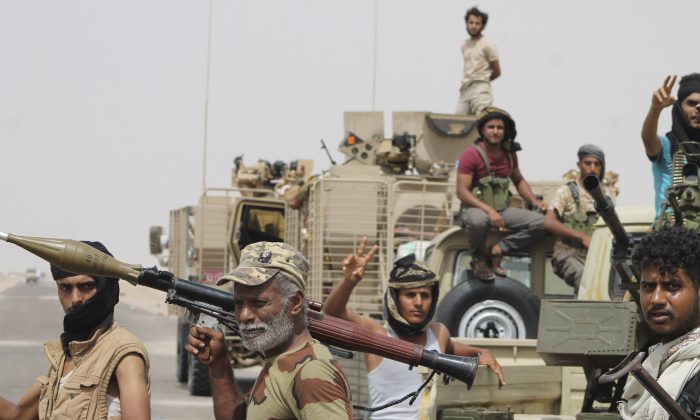 Fighters against Shiite rebels known as Houthis gather at the road leading to Al-Anad base near Aden in the southern province of Lahej, Yemen, on Aug. 3, 2015. (AP Photo/Wael Qubady)
Middle East

The rebels, known as Houthis, also blocked the flow of humanitarian aid to the provincial capital of Taiz, which is in government hands, said the officials, speaking on condition of anonymity because they were not authorized to talk to reporters. The officials remain neutral in the conflict that has torn Yemen apart.

The Houthis have been besieging Taiz for months and have prevented the delivery of essential aid to the war-ravaged city for months.

Yemen’s conflict pits the country’s internationally recognized government and the U.S.-backed Saudi-led coalition against the Houthis, who are allied with Yemen’s longtime former president.

Also Saturday, Houthi officials in the central Marib province said they fired a rocket at the presidential palace there which is being used as a military encampment by anti-rebel forces. They claimed the projectile killed several senior coalition officials there.

The Associated Press could not independently verify the claim and there was no immediate word from independent or coalition officials on any casualties in Marib.

Residents in the area said they heard the sound of an explosion coming from the palace, and that a fire had erupted in the building. They spoke on condition of anonymity fearing reprisals.