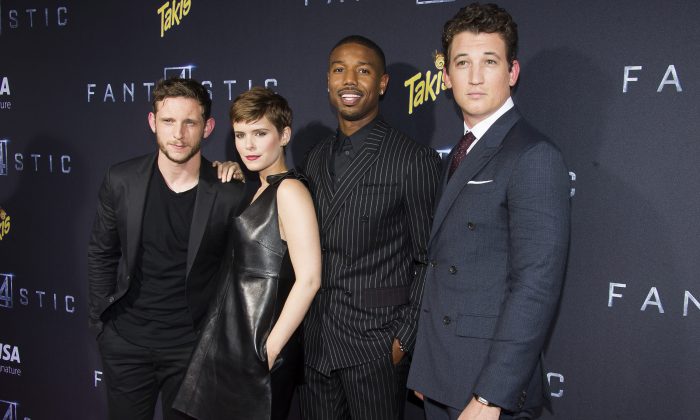 FILE - In this Aug. 4, 2015 file photo, Jamie Bell, from left, Kate Mara, Michael B. Jordan and Miles Teller attend the premiere of "Fantastic Four" at the Williamsburg Cinemas in the Brooklyn borough of New York. (Charles Sykes/Invision/AP, File)
Entertainment

LOS ANGELES —”Spectre,” the 24th James Bond film in 53 years, has just kicked off its theatrical release, scoring the second highest domestic opening in franchise history. Yet fans have been speculating for months who the next 007 will be, since four-timer Daniel Craig is nearing the end of his run.

One of the more popular suggestions in the fan casting game has been Idris Elba, but Bond author Anthony Horowitz turned the fun into a firestorm late this summer when he commented that the actor was “too street” to play 007.

While Horowitz quickly apologized, many fans took to social media to express their outrage—and not all of it was in support of Elba. James Bond, some said, must remain white.

The Horowitz controversy continues to reverberate, serving as yet another remind of an attitude that’s been around as long as films have become franchises—that fictional white characters must remain white when their actors are replaced or when they’re adapted from text.

“I think it was a telling episode that in my mind, at least, reflects what’s wrong with the industry—where the industry is and the work that needs to be done,” said Darnell Hunt, co-author of the 2015 Hollywood Diversity Report, and head of UCLA’s Ralph J. Bunche Center for African American Studies.

In a business where minorities are still underrepresented onscreen, despite making up 40 percent of the U.S. population and 51 percent of frequent moviegoers, the resistance to diverse casting seems misplaced.

“Here’s what I have to say: Cleopatra didn’t look like Elizabeth Taylor. End of discussion,” said director Spike Lee, when asked about the issue.

It’s not the first time that fans have pointed to series tradition to squash efforts to diversify—real or speculative. When Michael B. Jordan was cast as Johnny Storm in this summer’s “Fantastic Four,” the backlash was so ugly that Jordon wrote an essay for Entertainment Weekly about “torching the color line.”

“Maybe, if I set an example, Hollywood will start considering more people of color in other prominent roles, and maybe we can reach the people who are stuck in the mindset that ‘it has to be true to the comic book,'” he wrote.

The same happened to Quvenzhané Wallis when she was cast in “Annie.” And commenters even lashed out against “The Hunger Games” for casting actress Amanda Stenberg as Rue—as if they’d forgotten that the character is described in the book as having dark brown skin.

In the tricky terrain of Internet vitriol, a lot of the time the racism is very real. Other times, the backlash is the only reason we hear about it. A report by online publication Mashable found that the recent #BoycottStarWarsVII crusade—purportedly in reaction to John Boyega’s Stormtrooper—was not a movement at all. It was six percent trolls and 94 percent backlash that got the hashtag trending nationally.

As for Bond casting, franchise producers Barbara Broccoli and Michael G. Wilson say Craig is 007 until he’s not, and they won’t entertain any mention of Elba—or anyone else.

They’re no strangers to the feverish passion surrounding 007, which the Internet has only amplified. Casting the blond-haired, blue-eyed Craig was even a controversial decision among fans at the time.

“The fans and the public take Bond very personally, as we do,” said Broccoli. “There’s a lot of debate and we think that’s wonderful.”

They do acknowledge the need for more diversity in Bond films and all films.

“It should be a big topic,” Broccoli said. “We’re certainly in support of that. … It’s really important to have diversity, and we should encourage it in our movies and other movies.”

“Skyfall” saw the addition of a black Moneypenny in actress Naomie Harris.

Umberto Gonzalez, editor in chief of the website HeroicHollywood.com, closely monitors casting talks and decisions in the industry and points to the casting of Samuel L. Jackson as the historically white Nick Fury in the Marvel films Cinematic Universe as the perfect example of how quickly a non-traditional choice can become not only accepted, but beloved.

He said that sometimes industry insiders are the ones who start rumors about unconventional castings, just to see what the fan reaction will be. In that respect, there is palpable enthusiasm for more diversity in historically white roles.

“There’s a disconnect between conventional wisdom in Hollywood and where the audience is. America is a very diverse place and it’s becoming more diverse each passing day,” said Hunt. “They want to feel like they’re included in the narrative. It’s not like they only want to see themselves, but they want to see a picture of America that looks like America.”

While there might not be a direct correlation between Internet campaigns and actual casting decisions, Hunt said it can’t hurt.

There are signs of change, too, in the comic book world. Marvel Comics has dramatically changed the racial makeup of its classic characters: Captain America is black, Thor is a woman, new Spider-Man Miles Morales is half-black and half Latino, and the Hulk will soon be Korean. It remains to be seen whether those changes will be reflected in the movie versions.

Slow progress is being made on the small screen, too. In “Supergirl,” Jimmy Olsen is played by Mechad Brooks.