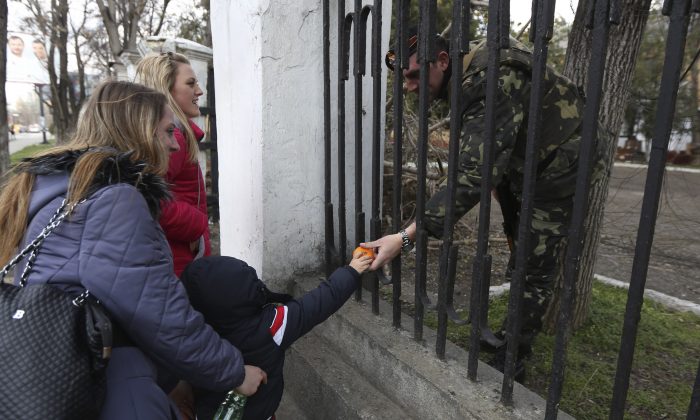 “In the information age, success is not merely the result of whose army wins, but also of whose story wins.” The words of Harvard scholar Joseph Nye have been borne out in Ukraine.

At the moment, the Moscow narrative appears to have the upper hand both in Crimea and in Russia – where the Putin government has moved recently to stifle dissent.

Footage and photographs of thousands of jubilant Crimeans celebrating through the night after an overwhelming vote to secede from Ukraine carry an emphatic message. As one headline in Russia, quoted by the BBC, trumpeted: “Crimea is now returning to Russia.”

Each development in the rapidly unfolding crisis has been chronicled by media professionals and citizen journalists on social media. Each of the key parties to the debate spins a contrary narrative, grounded in different world views. Which account proves more convincing will help to determine which political outcomes are ultimately accepted as legitimate; not only in Ukraine and the West, but in the international community more broadly.

When the Crimean parliament declared independence from Ukraine, its members refused to recognise the interim national government which they perceive as having seized power following a fascist coup-d’état. The pro-Western opposition claims Yanukovych’s alleged order to shoot on protesters rendered the former president unfit to rule.

In the run-up to the Crimean referendum – and in its immediate aftermath – the competing narratives were just as starkly opposed. The pro-Russian side argues, with a degree of justification, that the overwhelming vote has been a reaffirmation of Russian sovereignty in Crimea, since the region was transferred within the Soviet Union in 1954 by Khrushchev, who did not foresee Ukraine becoming an independent state. In the West, the vote has been dismissed as illegal under Ukraine’s constitution and international law.

But this struggle is not only about “the facts” but increasingly about the power over their interpretation and the capacity to disseminate that view effectively.

In the information war of the past weeks, Russia has scored several bullseyes. Kremlin-backed English-language channel Russia Today first released an intercepted call between assistant secretary of state Victoria Nuland and the US ambassador to Kyiv, Geoffrey Pyatt, in which the interlocutors discussed their views about the future of Ukraine. While the Western media has focused on the profanities used to express frustration with the EU, the greater scandal is actually the empowered tone with which they discussed their preferences among the opposition leaders, who are condescendingly abbreviated to “Yats” and “Klitsch”.

In a second diplomatic exchange leaked by Russia Today, Estonian foreign minister Urmas Paet was heard to tell the EU’s high representative Catherine Ashton: “There is a stronger and stronger understanding that behind snipers it was not Yanukovych, it was somebody from the new coalition”. Both parties to this conversation have since sought to reframe it as a discussion of a conspiracy theory, rather than an “assessment of the opposition’s involvement in the violence”.

While question marks hover over Russia Today’s objectivity, not to mention the provenance of the intercepted dialogue, the recording has provoked a storm of debate on social media. Despite the fact that such disagreements about the origins of the crisis have filtered through into the mainstream Western press, there is a prevailing sense that such core questions have been displaced on the agenda by escalating current events.

Meanwhile, both sides have delved into the shadows of Nazism in rhetorical support of their position. The Russian side points to the radical right-wing elements in the interim government to discredit the opposition movement as “Banderivtsi” in reference to Stepan Bandera, who is reviled by Russia as the leader of Ukrainian collaboration with the Nazis.

For its part, the opposition, along with Hilary Clinton, has sought to equate the probable presence of Russian forces in Crimea with Hitler’s annexation of the Sudetenland in 1938. While the moniker “Putler” and gaudy visual memes of the Russian president with a superimposed toothbrush moustache are social media-friendly, the more powerful move in evoking the trope of appeasement, as before the US invasion of Iraq in 2003, lies in its emotive appeal to European powers to take punitive action against Moscow.

Such is the volume and velocity of recent events, keeping abreast of political developments is not conducive to balanced, evidence-based judgements. And the emotional content of much of the coverage from both sides has done little to foster critical reflection on events. While the USA and Russia trade accusations of disinformation, EU hesitancy to act against Russia might be seen not simply as an indicator of weakness or fear of the rebounding consequences of economic sanctions, but as a sign of backstage misgivings about the information emerging from Kiev.

To build a steady foundation for peace acceptable to all Ukrainians, including those in Crimea, and in order for the fledgling Ukrainian government to legitimise its rule, justice must be done and be seen to be done. The EU should press for the urgent, independent investigation of all criminal acts, against both protesters and state representatives.

Victoria Hudson does not work for, consult to, own shares in or receive funding from any company or organisation that would benefit from this article, and has no relevant affiliations.