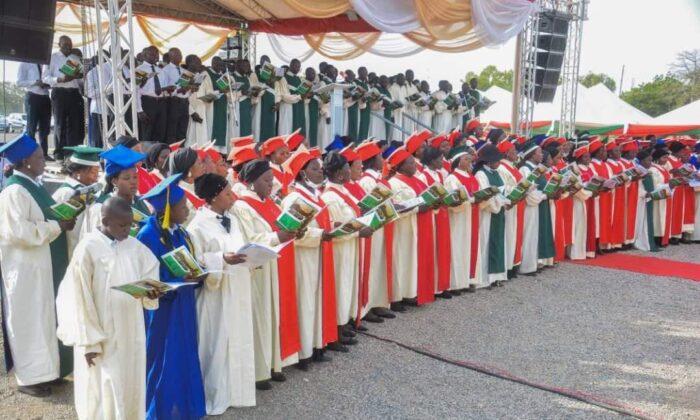 Even in the northernmost state of Sokoto, the heart of Nigeria’s Islamic region, more than 5,000 Christians are heading to church this week, according to Rev. Oro Yakubu, administrator of 30 congregations of the Evangelical Church Winning All (ECWA).

“We have 8 congregations of ECWA in the Sokoto metropolis and more than 1,000 of our believers will be worshipping on Christmas,” Yakubu tells The Epoch Times. The citywide number of Christians is above 5,000, he said. Yet, the scourge of kidnapping for ransom struck his own family on Nov. 9 when bandits abducted his wife from a commercial vehicle on a public road.

“It was God’s miracle that she was released three days later,” Yakubu said, but the ransom paid was 2.5 million Naira, equivalent to $5,000. Such ransoms have crippled thousands of Christian churches in the north and the so-called Middle Belt of Nigeria. Since September more than 20 persons in the city have been kidnapped, most of them Muslim, he said.

“The local security agencies are watching our churches due to threats to Christians; therefore some congregations will have worship services in the afternoon on Christmas eve,” Yakubu said.

Nigeria’s sectarian conflict with an Islamist insurgency calling itself Boko Haram, which translates as “Western learning is forbidden,” has claimed more than 350,000 lives since 2009, according to the UN. In addition, thousands of Christian Nigerians have been murdered by radicalized bandit militia marauding through mainly Christian villages in the Middle Belt during the last 6 years.

Yet, even among the Fulani ethnicity, a tribe proud of its Islamic faith, thousands  of Fulani Christians are celebrating Advent, sometimes behind closed doors, one of its foremost faith leaders says.

“All our members celebrate Christmas and are anxiously looking forward to this year’s celebration. But all that is done from hiding,” according to Rev. Buba Aliyu, a Fulani church planter.

“Many of them are in our rehabilitation center in Jos which was recently relocated after it was attacked by armed Fulani militants in the last two months,” he told The Epoch Times by phone.

“They came with heavy guns but thank God for the neighborhood watchmen! They helped to repel them and even seized one of their guns. Therefore,  we relocated the center. That’s where many of them will be celebrating Christmas.

“Those Fulani Christians who are still with their Muslim families  but who have not yet been discovered to have converted will most likely only celebrate behind closed doors, because they could get killed if caught and that is the challenge we are facing,” Aliyu said.

In the rural town of Miango, 20 miles west of Jos, Christians are taking precautions after a massacre of 10 citizens in a neighboring village on Nov. 26 and the threat of following attacks, according to Lawrence Zongo, who reported the event for The Epoch Times.

One of the terrorists dropped his cell phone in the dirt as he was retreating the night of the attack. A leader of the armed neighborhood watch team got a call on the captured phone from a man who said the gang would return before Christmas and wipe out the entire town.  Since that attack, and a three-day massacre of 72 people in the Miango area from July 31 to Aug. 2, police have made no arrests, according to Zongo.

The threat of attacks to churches in war-torn states of Nigeria’s Northeast is largely gone this Christmas, according to Tom Garba, an Epoch Times reporter based near Yola, the capital of Adamawa State. “The reason for the change is that thousands of communities displaced by Boko Haram have returned to their ancestral lands. They are living a normal life despite sporadic attacks by the insurgents,” Garba reports.

Rev Joel Stephen Billi, pastor and President of the Church of the Brethren in Maiduguri, and overseer for churches in Borno and Adamawa, said he has encouraged members to “put all fears behind them and set their minds toward a good Christmas celebration.”

Despite letters threatening  impending attacks by what he called “bandits allied with Boko Haram,” these letters will not kill the spirit of Christmas celebration for which his church is proud.

“We are in a high spirit, we are not deterred by the rumor that letter was delivered to Michika, Bazza and the story around that Adamawa may be attacked. This will never make us jittery and afraid,” Billi said to the Epoch Times.

“We’ve seen it all,” he added. “The churches in Northern Nigeria have gotten the worst of it, and the journey is ongoing, yet the journey of reaching to heaven will not stop halfway. Until we all reach our destiny nothing will stop us,” Billi said

In Nigeria’s Northeastern Adamawa State Christians joined in mass Christmas carol singing organized by the State Chapter of the Christian Association of Nigeria (CAN) under the chairmanship of Bishop Dami Stephen Mamza.

“Myriads of believers from several churches filled Ribadu Square venue of the event and were charged by several speakers to be security conscious but not to be overwhelmed by fear,” Garba reported.