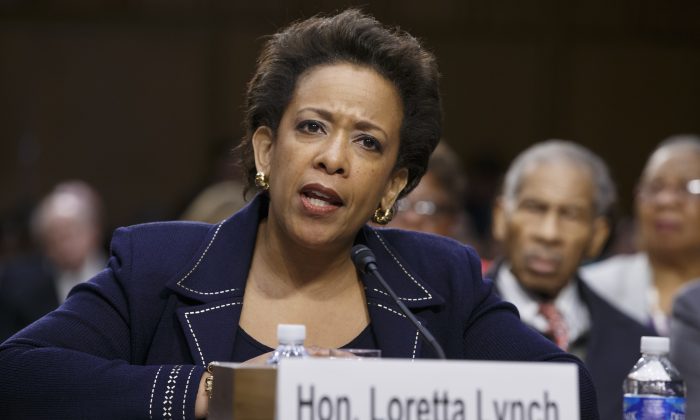 After 110 days of waiting, President Barack Obama’s nominee for attorney general, Loretta Lynch, was confirmed by the Senate judiciary committee on Feb. 26.

Dissenters notwithstanding, Republicans mostly took Lynch to task for supporting the legality of President Obama’s immigration executive action, which would provide temporary relief from deportation and work permits to roughly 5 million immigrants who are staying in the country illegally. Last week, a federal judge in Texas issued a temporary injunction to halt the president’s executive action.

US Attorney Loretta Lynch, the New Yorker Born in Midst of the Civil Rights Movement

Among the most vocal critics was Sen. Ted Cruz (R-Texas), who felt Lynch was unqualified for the position as the country’s top law enforcement officer, because she refused to directly answer his questions during her confirmation hearing in January.

Cruz was dissatisfied with Lynch’s answers to a number of questions, ranging from the legality of Obama’s executive order, to whether the federal government could use a drone to attack an American citizen on U.S. soil. Many of his complaints were also outlined in an editorial he wrote for the POLITICO online magazine published this week.

“I wouldn’t be surprised if Obama extends amnesty to 12 million [illegal] immigrants and Lynch rubber-stamps it,” Cruz said at the Judiciary Committee’s executive session Thursday. “Those views are radical. Those views undermine the law.”

When Sen. Amy Klobuchar (D-Minn.) questioned Cruz’s claim that Obama’s executive action was illegal—pointing out that every president since Dwight D. Eisenhower has granted some form of temporary immigration relief—Cruz stood up from his seat and left the room.

Despite their opposition to Obama’s immigration policy, senators Orrin Hatch (R-Utah), Jeff Flake (R-Ariz.), and Lindsey Graham (R-S.C.) said they chose to vote for Lynch because of her notable career as a prosecutor, and their desire to replace current Attorney General Eric Holder as soon as possible.

Lynch also promised them that she would uphold the temporary injunction on Obama’s immigrant relief programs if she were to become attorney general.

Democrats criticized their Republican colleagues for holding up Lynch’s confirmation simply because she held views on immigration different from their own. Lynch told the committee during her confirmation hearing that she had no reason to “doubt the reasonableness” of the Justice Department’s legal opinions in granting the president authority to issue his executive action.

“Regardless of your views on immigration, Lynch as proven beyond reasonable doubt that she is qualified,” Sen. Chuck Schumer (D-N.Y.) said. “The political fight [over immigration reform] is totally, totally unrelated.”

Schumer also pointed out that previous attorney general nominees, such as Michael Mukasey, similarly declined during his confirmation hearing to answer directly senators’ questions about immigration policies and other legal concerns.

“I voted for him, as did most of my colleagues then,” Schumer said.

Schumer and other Democrats also voiced their disappointment at the delay for Lynch’s confirmation, whose nomination the president announced back in November. The wait is among the longest in recent history. Committee Chair Chuck Grassley (R-Iowa), who voted against Lynch’s nomination, explained that the delay was to properly assess her qualifications and ability to remain independent.

Some Democrats expressed that it was unfair Lynch had to endure a longer confirmation process than the men before her.

Lynch’s nomination will next be voted on by the full Senate. If confirmed, she will be the country’s first African-American woman to hold the position.