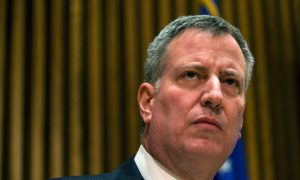 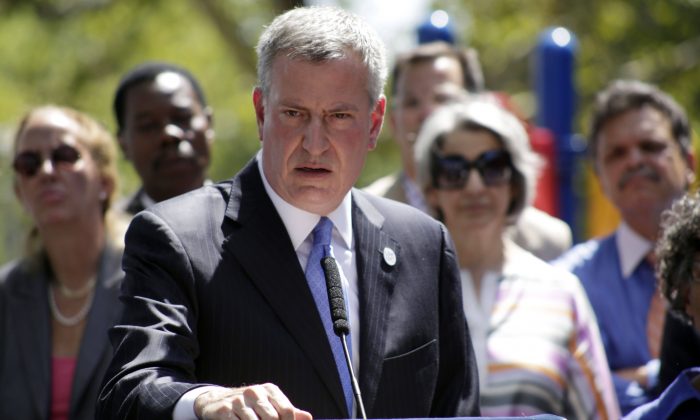 NEW YORK—Major crimes are near record lows since the city started keeping track, and officials are pointing to the numbers to dissuade the characterization that police are not doing their jobs. Recent reports have shown a drastic drop in summonses issued and arrests made for petty crimes—things like parking tickets and low-level marijuana arrests. Drops were over 90 percent in the last two weeks compared to the same week in 2013 (ex: over 10,000 parking tickets in 2013 compared to under 600 in the same week in 2014).

“We did things that were unimaginable in terms of bringing down crime,” said mayor Bill de Blasio at One Police Plaza.

“Overall major crime is down over 4.6 percent 2014 from 2013,” de Blasio said, “the lowest number of homicides since the modern policing era.”

Homicides are at record lows and robberies are down across the board—in every borough and for every group.

“Every number indicates a human life or a family,” de Blasio said. “This is progress that has had a deep impact on our neighborhoods across the five boroughs.”

De Blasio said the New York Police Department is committed to being better and he has a positive vision of the citizens and police working together to ensure better and safer communities. The recent events of protests and two police deaths have put pressure on the administration’s relationship to the police force.

De Blasio pointed to the drop in civilian complaints of police as a good sign. Complaints have dropped 11 percent in 2014.

“People in this city appreciate the police,” de Blasio said.

Police Commissioner Bill Bratton said 2015 would be the year of technology. There are initiatives underway to arm police officers with tablets and smartphones. The department will also enhance its helicopter fleet and expand harbor patrol.

Because shootings have gone up, police said they would zero in on the issue going forward.

About 45 percent of shootings are gang-related, and  84 percent of the time, victims of shootings have a criminal record. Most shootings involve someone who was involved in a previous shooting, whether as the shooter or a victim.

Officials also addressed the concern of over-policing, and the recent arrest drops.

“Fewer people are being stopped across the city and a higher percentage of those stops result in arrest,” said NYPD deputy commissioner Dermot Shea. There is police use of force in 2 percent of arrests according to Bratton.

The number of stop-question-and-frisk stops have dropped 75 percent, and the department will continue in this direction. Bratton said the practice was here to stay, as is broken windows policing.

Bratton attributed the drop in arrests to the number of large-scale protests (which require personnel), the funerals of the two fallen police officers, officers doubling up for patrols, and drop in crime overall.

“I don’t think we’ve quite had a month like this last month,” Bratton said. “We’re not in a public safety crisis by any stretch of the imagination.”

De Blasio said he believes in broken windows policing as well. Community members feel they are safe because of it and it is good for the economic well-being of the city, he said. “I want people to take a moment to recognize how momentous these numbers are,” he said.

UPDATE, 4 p.m. : The article has been updated with Police Commissioner Bratton’s comments.