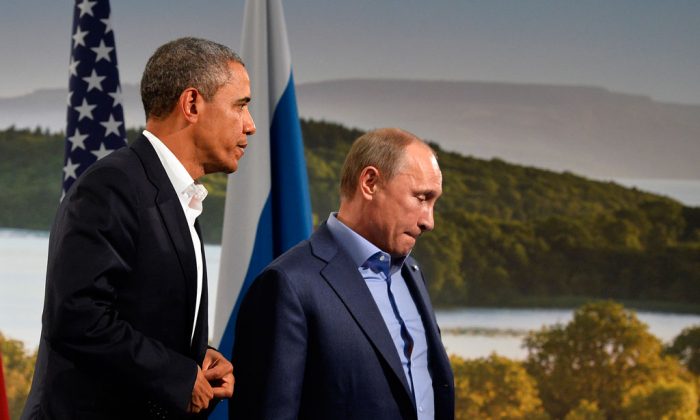 Despite Rhetoric, Russia and US Can’t Afford Another Cold War

The United States has denounced the Russian involvement in Crimea as “a brazen military incursion” and its annexation of the territory as “nothing more than a land grab” by Moscow. In the pre-referendum phase of Crimea, Washington adopted a tough posture, sending 12 F-16 fighters and 300 military personnel to Poland for joint NATO training.

But after the Russian takeover of Crimea, the United States has ruled out any military incursion in the Ukraine over Crimea issue and has preferred to opt for economic measures, putting sanctions on 11 Russian and Ukrainian officials and hinting at more stringent measures to come.

In his turn Russian foreign minister Sergei Lavrov told John Kerry there would be “consequences” if any significant economic sanctions were enacted by the United States. The stand-off continues.

After the end of Cold War the ideological differences between United States and Russia seemed to fade, especially on how to deal with terrorism; the US dealing with the consequences of 9/11 and Russia, mindful of its own problems with terrorism, co-operating.

But the U.S.-Russia confrontation over Georgia in 2008 initiated a string of spats: tussles in the U.N. over Syria and the Iranian nuclear program exposed fundamental differences in the two countries’ foreign policy interests, while Russia’s granting of asylum to Edward Snowden and the launch of a talk show on state radio hosted by fugitive WikiLeaks boss Julian Assange—short-lived but irritating to Washington—seemed to be prime examples of Moscow thumbing its nose at the United States. But this latest stand-off on the Ukrainian crisis has developed into the worst East-West confrontation since the Cold War.

Both sides have accused each other of precipitating the crisis in Ukraine. Barack Obama has talked tough, promising escalating penalties if Russia doesn’t back down over Crimea, but so far his rhetoric contrasted with his actions appear to be the opposite of his predecessor Teddy Roosevelt’s mantra: “Speak softly, and carry a big stick.”

Moscow treated the announcement of the U.S. sanctions package with derision, with the deputy prime minister Dmitry Rogozin mocking “Comrade Obama” via Twitter and asking: “What should do those who have neither accounts nor property abroad? Or U didn’t think about it?”

But despite these considerable strains in their partnership, the United States and Russia remain linked by many important security issues. Economic constraints and a desire for geo-strategic stability limit the wisdom and affordability of a Cold War-style stand-off between the two.

The United States and European Union have struggled to co-ordinate a response to Russia’s boldest military adventure since the 2008 Georgia war because the stakes are very different for both parties. The E.U.-Russia trade volumes—including vast gas imports and engineering exports—are 15 times the level of trade between the United States and Russia trade.

The response from the United States has been more combative because Washington considers it has far less to lose from a trade war, hence the tougher rhetoric and the dispatch of fighter jets and military personnel to Poland and Lithuania and the threats to exclude Russia from the G8 meeting.

The E.U. response, meanwhile, has been feeble, perhaps because E.U. member states have a range of different priorities. The E.U. summit that was held to respond to the Russian intervention in Ukraine ended with an agreement on small steps, and a warning that sanctions could follow if Moscow does not abide by the international law.

Other E.U. measures include an agreement to postpone negotiations on a more liberal visa regime for Russians, to halt the move towards a new E.U.-Russian all-encompassing relations pact and to stop arrangements for the G8 summit to be held in Sochi in June 2014.

Both the United States and Russia are nuclear superpowers and they have a common interest in and responsibility for managing global nuclear stability. They need to manage not only their own nuclear weapons but work towards nuclear non-proliferation and security, which remains an important aspect of international security.

Despite their disagreement on certain strategic and economic issues in the Middle East, the two super-powers have converging interests in the region, including halting proliferation and tackling Islamic radicalism. Despite their differences on Iran, for example, both have an interest in not letting Iran develop a nuclear weapons capability.

Both countries have problems with Islamic fundamentalism—but Russia’s war on terror is ongoing and bitter in several of its republics, most prominently Chechnya, Dagestan, Ingushetia, North Ossetia, and Tatarstan. In the post- 9/11 scenario, the counterterrorism collaboration contributed an element of confidence and mutual trust between Russia and the U.S.-led West on this new asymmetric security challenge of the post-Cold War era. The fight against terrorism remains a paramount issue on which both will need to collaborate.

The financial constraint will remain a factor for both sides. Strobe Talbott, the director of Brookings Institution, opines that Russia can’t afford the old Soviet style of military stand-off as it has now a stock market which is not immune to international crises. In fact, unlike the Soviet era of economic self-sufficiency, today the Russian economy is tied to foreign economic forces and market fluctuations.

Russia’s economy has performed well over the past decade because of its energy boom, a large part of which is due to sales to Europe, which gets one third of its oil and gas from Russia, so Moscow can’t afford to risk a reduction of sales to Europe. Likewise, though far stronger economically than Russia, the United States can’t afford another war—Iraq and Afghanistan have already taken their toll on Wall Street and Washington can’t afford further military adventurism.

The changing geo-strategic dynamics further limit the Cold War style stand-off. Both have to compete with other rising and aspiring great powers, particularly China. Though China sided with Russia in the Syrian crisis and many other issues in the Middle East, Beijing is pursuing its own strategic interests rather than lining up with Moscow. On the Ukraine issue Beijing has called for a diplomatic solution, supported Ukraine’s sovereignty and territorial integrity, and abstained in UNSC votes.

In conclusion, the United States and Russia will damage their own interests if they continue this kind of stand-off. Both should look for a diplomatic solution to the Ukrainian crisis.