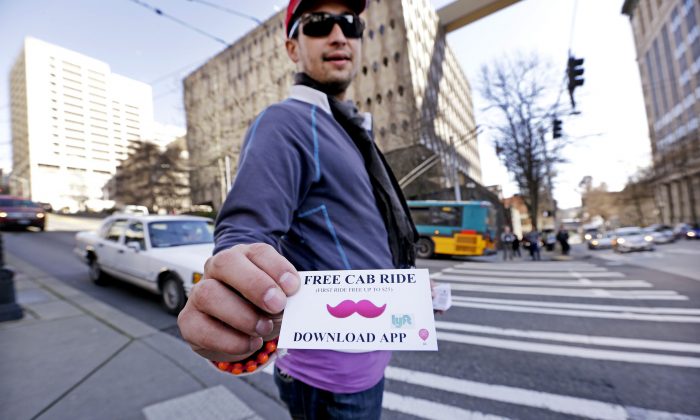 Jerad Bernard hands out cards to passers-by offering one free ride through the Lyft ridesharing service in Seattle, March 14. Beginning at 7 p.m. on Friday, residents in Brooklyn and Queens, N.Y. can hail a car from Lyft’s 500-unit fleet on their smartphones. (AP Photo/Elaine Thompson)
New York

Despite Regulations, Lyft Launches in NYC

NEW YORK—The ride-sharing startup Lyft will launch its services in New York City on Friday, despite having recently broken off negotiations with the city’s Taxi and Limousine Commission (TLC).

Beginning at 7 p.m. on Friday, residents in Brooklyn and Queens can hail a car from Lyft’s 500-unit fleet on their smartphones. Lyft cars can take passengers to Manhattan and the Bronx, but can’t pick up customers there.

Unlike its main competitor Uber, Lyft is not licensed by the TLC, which has promised to block Lyft’s untrammeled expansion into the city.

“We’re still hopeful that Lyft will accept our offer to help them do the right thing for New York City passengers as they should,” said TLC Chair Meera Joshi, “but New Yorkers can rest assured that the TLC will do its job and take the actions necessary to protect them.”

A TLC spokesman said that Lyft drivers could have their cars impounded indefinitely and face a $1,500 fine, plus storage costs.

Sting operations targeting Lyft drivers in Miami and Madison, Wis., were reported earlier this year. Drivers from Lyft’s rival Sidecar were caught by the NYPD in a similar operation in 2013.

As part of its inauguration into the city, Lyft will offer free rides in its cars for two weeks.

The e-sharing company’s promotion coincides with Uber’s reduction of its UberX fares by 20 percent for an unspecified amount of time, which has sparked rumors of a price war.

Uber raised $1.2 billion last month and has a $17 billion valuation, compared with Lyft’s $700 million valuation in late March. The companies have engaged in ad campaigns to poach each other’s drivers.

Lyft also rolled out its services in Austin, Texas, beginning in July, without approval from the city’s regulators, resulting in at least four Lyft drivers having their cars impounded.