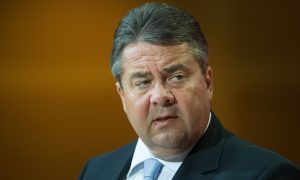 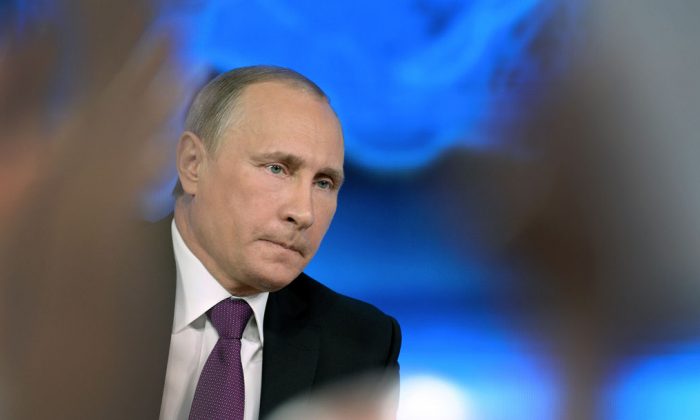 Russian President Vladimir Putin gives his annual press conference in Moscow on Dec. 18, 2014. Putin crushed Chechnya's rebellion, pushed back Russia's frontiers and restored the pride of a nation humiliated by the demise of the Soviet Union. But 15 years after he came to power Vladimir Putin's faces his biggest challenge yet: how to manage the worst monetary crisis of his era. (Alexander Nemenov/AFP/Getty Images)
Europe

Despite Pressure, EU’s Sanctions Against Russia Could Last

PARIS—EU sanctions against Russia over the crisis in Ukraine are cutting both ways: hurting Russia as well as pinching some big European companies. But economic relief isn’t likely any time soon, diplomats and analysts say, since EU divisions make the sanctions tough to overturn.

France, Germany, Russia and Ukraine are trying to set up talks in Astana, Kazakhstan, to ease the tensions behind the sanctions that have hit the Russian economy, sent the ruble sinking and affected corporate Europe — including banks, oil companies, machinery makers and food giants.

European Union rules complicate any attempt to modify the sanctions put into place last year amid the separatist violence in eastern Ukraine and after Russia’s annexation of Crimea. A unanimous decision by all 28 EU nations is needed to change the sanctions, and analysts say such unanimity doesn’t exist.

The main EU sanctions — which have hit Russian banks and oil companies and have banned arms exports and the export of dual-use goods — are in place until the end of July. A first review of some sanctions could come in March.

“We don’t turn any sanction screw just for the sake of turning,” German Chancellor Angela Merkel’s spokesman, Steffen Seibert, told reporters Monday. “The sanctions are responses to concrete situations from the Russian side and concrete situations in eastern Ukraine.”

Zsolt Darvas, a senior fellow at the Bruegel think tank in Brussels, said France and Italy are among those more open to lifting the sanctions while Poland, Britain and the Baltic countries want to stand firm.

It’s not certain the Astana talks on Jan. 15 will take place — diplomats say high-level preparatory talks are planned Friday. French President Francois Hollande told France-Inter radio that he would only attend the Astana talks if progress could be made in easing the tensions but expressed optimism it could be.

“The sanctions should be lifted if there’s progress. If there’s no progress, the sanctions will remain,” he said Monday, adding that Russian President Vladimir Putin, meanwhile, “of course is not letting on that he has the slightest difficulty. He has difficulties.”

So do, though, some European corporate titans.

Hollande was to meet Wednesday with Patrick Pouyanne, the new chief executive of the French oil giant Total, in part to discuss the EU sanctions. Pouyanne has agreed with his predecessor — who died in a plane crash in Russia in October — in calling the sanctions “unjust and unproductive.”

Beyond the tensions in parts of eastern Ukraine held by pro-Russia militants, diplomats from three EU delegations said Russia’s 2014 annexation of Crimea was making it impossible to move quickly to ease the sanctions against Moscow.

“It is unacceptable to have the situation in Crimea as a fait accompli,” said one diplomat from a northern EU nation, adding that no moves were underway to ease the pressure on Moscow. All three diplomats spoke on condition of anonymity because of the sensitivity of the issue.

But overall, the fallout was limited to less than 1 percent of GDP in all EU countries, Ivan said.

“There are no serious reasons to change the policy,” he said. “Fighting in Ukraine goes on, there are reports of new Russian military vehicles. There are no real improvements … The policy will continue as long as the situation doesn’t improve there on the ground.”

From The Associated Press. David Rising in Berlin and John-Thor Dahlburg and Raf Casert in Brussels contributed to this report.