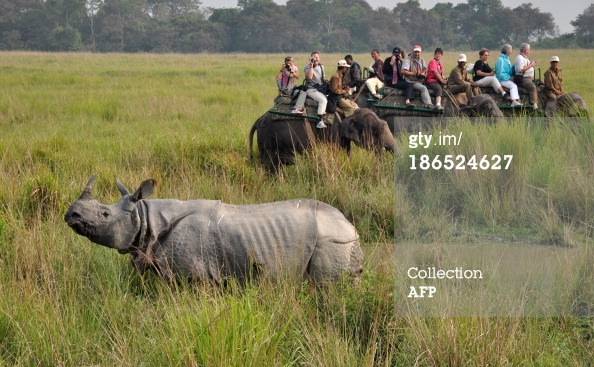 ourists photograph a rhinoceros during an elephant safari at Kaziranga National Park, some 250kms east of Guwahati on November 1, 2013.(Photo credit should read STRDEL/AFP/Getty Images)
Environment

There are whispered ‘hurrays!’ among numerous wildlife conservationists of the country. The population of Indian rhinos or one horned rhinos living in Assam has increased by 27 percent in the last seven years according to the latest census reports. Even as the news is a big relief the worry lines still exist as India tries hard to contain the rising cases of rhino poaching, especially in this North eastern state.

Assam’s Kaziranga National Park, Manas National Park and other wildlife sanctuaries are crucial rhino habitats with three fourth of the global population of the greater one horned rhino in this state. While rising poaching cases has become a regularity, a recent report released by state Environment and Forest Minister Rockybul Hussain ‘White Paper on Wildlife Conservation in Assam’ shows that the number of the pachyderm in the state has risen by nearly 27 per cent to 2,544 in the last 7 years.

“We are taking various steps to protect rhinos with the help of wildlife experts and legal professionals. As per the last rhino census, the population of the world famous animal has grown to 2,544 in entire Assam in 2013 from 2,006 in 2006,” he added.

In Kaziranga alone, a world heritage site, the rhino population has grown 2,329 from 1,855.

Giving more information about the poaching incidents in the state, the minister informed that between 2006 and May 2014, a total of 198 poachers have been arrested and 27 were killed in encounter with forest guards and other security establishments.

Sadly, in Kaziranga 96 rhinos have lost their lives in the time frame of the census when poachers brutally killed them for their horns. Rhino horns are sold in illegal wildlife markets across South east Asia. The total numbers of unnatural deaths recorded in this span are 152.

The minister said that the government is taking efforts to curb such incidents and it has increased the number of anti- poaching camps to 174 currently from 120 in 2002.

“The government is working on to protect the wildlife on the basis of two-prone strategy — anti-poaching management and habitat management,” he added.

But rhinos are still not safe. 15 rhinos were killed in the last 5 months in Kaziranga with the numbers expected to rise as the year ends. There have been regular attacks on rhinos with poachers successfully cutting off their horns. Each time, the forest officers have had just enough time to reach the spot after hearing gunshots and finding a rhino already dead or fatally injured with their horns missing.

Assam currently has 5 national parks and 20 wildlife sanctuaries, covering an area of 3,925 sq km. The state harbours more than 164 species of mammals, 800 varieties of birds and 116 different types of reptiles in addition to other faunal animals.

Amidst cautious celebrations of rising number of a rare and extremely vulnerable animal, it is also time to depute more man power and plan strategic management areas to ensure that the species is safe.

This article was originally written and published by Atula Gupta, the head-editor for indiasendangered.com. Please visit HERE for the original article and more information.