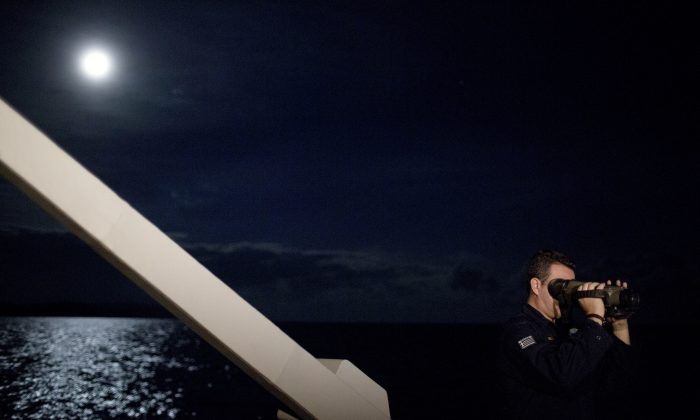 A Greek Coast Guard officer looks through night vision binoculars during a patrol at the Aegean sea near the Greek island of Chios on Jan. 20, 2016. Greek coast guard patrol vessels and lifeboats reinforced by the European Union’s border agency Frontex ply the waters of the eastern Aegean Sea along the frontier with Turkey, on the lookout for people being smuggled onto Greek islands, the frontline of Europe’s massive refugee crisis. (AP Photo/Petros Giannakouris)
Europe

Iraqis return home, disenchanted with life in Germany
By The Associated Press

“That’s a smuggler,” the captain of the coast guard’s lifeboat says, swinging the vessel around and opening up the throttle, the boat cutting through the water on a frigid January night.

But the lifeboat, designed for search-and-rescue operations rather than high-speed chases, is no match for the smuggler’s speedboat. The smuggler ignores the searchlight, the shouts and the warning shots fired by the Greek coast guard, deftly navigating his small white vessel onto a tiny patch of beach among rocks.

There he disgorges his human cargo—men, women and children risking their lives in a quest for safety and a better future in Europe. They use ropes to scramble up a cliff, heading toward a lighthouse on an island they are soon to discover is deserted save for an army outpost. They will spend a cold, wet, uncomfortable night there until the coast guard can send boats in the morning.

Hour after hour, by night and by day, Greek coast guard patrols and lifeboats, reinforced by vessels from the European Union’s border agency Frontex, ply the waters of the eastern Aegean Sea along the frontier with Turkey. They are on the lookout for people being smuggled onto the shores of Greek islands—the front line of Europe’s massive refugee crisis.

Although smugglers are often arrested, the task is mainly a search-and-rescue role. Hours spent on patrol shows the near-impossibility of sealing Europe’s sea borders as some have demanded of Greece, whose islands so near to Turkey are the most popular gateway into Europe.

Some European countries—notably Hungary and Slovakia—have blasted Greece for being unable to secure its border, which also forms part of the external limits of Europe’s borderless Schengen area.

“We have been saying all along that if the Greeks are unable to protect the borders of their country, we should jointly go down south and protect them,” Hungarian Prime Minister Viktor Orban said in November, with his Slovak counterpart Robert Fico echoing the thought.

But such calls ignore the realities at sea.

No matter how many patrol boats are out in Greek waters, attempting to force a vessel of asylum-seekers back into Turkish waters is both illegal and dangerous, even in calm seas. So unless a Turkish patrol stops a migrant boat and returns it to Turkey, there is little Greek or Frontex patrols can do once it has entered Greek territorial waters but arrest the smugglers and pick up the passengers or escort the vessel safely to land.

The sheer numbers have been overwhelming.

More than 850,000 people, most fleeing conflict in Syria and Afghanistan, entered Greece by sea in 2015, according to the UNHCR. Already in 2016, 35,455 people have arrived despite plunging winter temperatures and days of stormy weather.

The Greek island of Chios, second in the number of arrivals after the island of Lesbos, has three coast guard vessels and Frontex reinforcements.

“But when you have 50 or 60 (migrant) boats daily, you understand that these vessels can’t cope,” said Chios coast guard deputy head Commander Christos Fragias. “Both the crews and the vessels are strained from the overwork.”

Those reaching Chios have been lucky. The island has seen few deaths—about four or five, Fragias said, out of 118,000 arrivals in 2015.

Others have not fared so well. Two smuggling boats sank Friday off the tiny Greek islets of Kalolimnos and Farmakonissi, drowning at least 46 people, including 17 children. In all, more than 700 people have died or gone missing in the Aegean Sea, in both Greek and Turkish territorial waters, since the start of 2015.

The crew of Chios’ lifeboat has performed dozens of rescues.

“We make superhuman efforts. The five of us pick up 50, 60 people in 10 minutes,” says its captain. Last year, they rescued nearly 3,000 people, he said. Coast guard crews cannot be cited by name as they are not authorized to speak on the record.

Racing across choppy seas to check on a dinghy sighting as the weather turns for the worse, the captain of one of the island’s patrol boats described dramatic scenes of plucking struggling refugees out of stormy seas, where waves can hide victims from sight and maneuvering a pitching vessel in a sea full of people becomes precarious.

“It’s very difficult to save people in bad weather,” he said. “If there are incidents at sea, we only have a limited capacity, so we have to prioritize which boats are in danger.”

The dinghy he was called on to check arrived safely on a beach on southern Chios, so the captain turned the patrol boat north, heading to the deserted island that the smuggler was ferrying passengers to the previous night. By morning, 283 people, including dozens of children, a disabled elderly woman and an amputee await rescue. They will be transported to Chios, which will have received 1,026 people by the end of the day.

The patrol vessel and a Dutch Frontex speedboat take turns ferrying people in batches of about 25 to the nearby island of Oinousses, from where a large privately owned tug converted into a rescue boat will take them to Chios.

Among the new arrivals was Faysal, a middle-aged man from Damascus who would only give his first name after fleeing Syria following kidnapping threats.

“It was a horrible, horrible trip,” he said of the boat ride from Turkey, crouching on the patrol boat’s deck, his hood pulled up to ward off the rain. “They told us it would take 15 minutes, but it took 2 ¼ hours.”

The smuggler waited at sea for an hour to evade a coast guard boat, Faysal said. “We have no sea in Damascus, we are not used to this. We were all sick, and the boat was full of water.”

Once on land they lit fires, burning their lifejackets to keep warm. Next to him, tears of pain trickled down the soot-blackened face of a woman who had hurt her leg on the rocks getting off the smuggler’s boat.

Faysal ran a successful heating business in Damascus, but said he no longer had the option of staying.

“There is no safety. I left everything behind; my business, my home,” he said.

He hopes to reach Holland, where his sister lives. But the onward journey will have to wait a day or two.

“We have no strength to go on tonight,” he says. “We have to have some rest.”