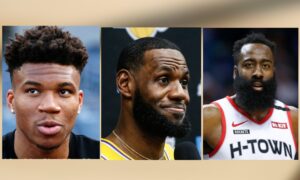 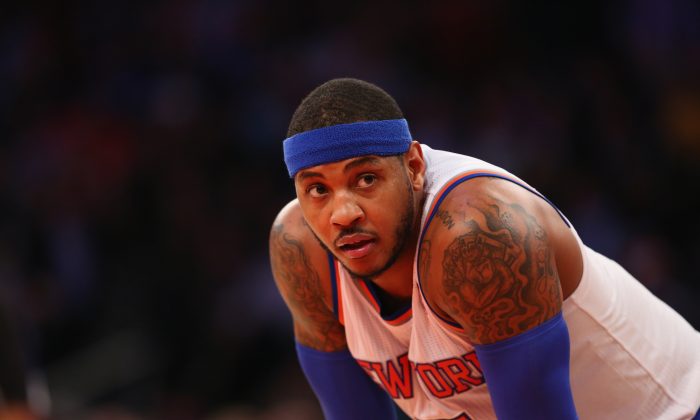 Carmelo Anthony led the league in scoring in 2012, but is part of a struggling Knicks team this year. (Al Bello/Getty Images)
NBA

Despite Losses, Knicks Have Decent Shot at Keeping Melo

There are 20 games left in the NBA’s regular season, and if the 22-40 Knicks lose one of them, they’re guaranteed to finish without a winning record for the first time since the 2009-10 season—the year before they traded an arm and a leg for Carmelo Anthony.

Of course the win-loss record, in and of itself, isn’t actually the team’s biggest worry right now.

The biggest worry would be seeing Carmelo bolt after the season—for nothing.

The Knicks have no budding stars, are low on team chemistry, and failed to take action earlier in the season when it was evident something was wrong. Even when it was going right last season, the Knicks only made it to the second round of the playoffs.

To make matters worse, the NBA’s trade deadline has passed, meaning New York has blown any opportunity to trade an unhappy Melo this season. Of even more concern are the latest rumors/reports that have Chicago center Joakim Noah recruiting Melo to the windy city at last month’s All-Star weekend.

These aren’t the rumors of a happy, content player. And while the Knicks weren’t that great when Melo arrived as a 26-year-old in 2011, the team had gotten better with each season—until this one.

Despite all this, the Knicks actually have some hope left to keep Melo around after this summer. Why? How? It’s called money. New York can pay him more than anyone and will certainly offer him an extension starting in the $20-million-a-year realm.

Should he choose to look around though, let’s look at New York’s two main competitors in free agency:

1. Chicago: The Bulls have a lot to offer as far as wins and losses are concerned. They have the aforementioned Noah at center, as well as former MVP Derrick Rose at the point. Rose, assuming he heals as planned, should be ready to go next season and with Melo on the wing, they would be quite the scoring duo.

Any worries about how Rose and Melo (who both want the ball) could co-exist in the same offense, would be take care of by one of the best coaches in the business—Tom Thibodeau.

The only drawback to the Bulls is how much money they can offer. Assuming they amnesty Carlos Boozer, which would clear up around $15 million, Chicago would still be well under Melo’s $23 million 2014-15 salary should he stay with the Knicks.

2. Los Angeles Lakers: The Lakers have the prestige that the Knicks have, but are just as much of a mess on the court with a 21-40 record. But with only Kobe Bryant signed for next season, the Lakers are clearly going to have some money to spend in the offseason.

Should they go after Melo, L.A. would be able to make a much more competitive offer than Chicago.

But, despite all the glitz and glamor of re-locating to Hollywood, and playing for one of the most successful franchises ever, the Lakers have a drawback: coach Mike D’Antoni. D’Antoni of course was Melo’s coach when he was traded to the Knicks in 2011. He was then ousted mid-way through the 2011-12 season and it was widely speculated that his inability to win with Carmelo was a major reason why.

What will happen this summer remains to be seen, but despite all the losses, the Knicks could still wind up with one of the game’s greatest players.