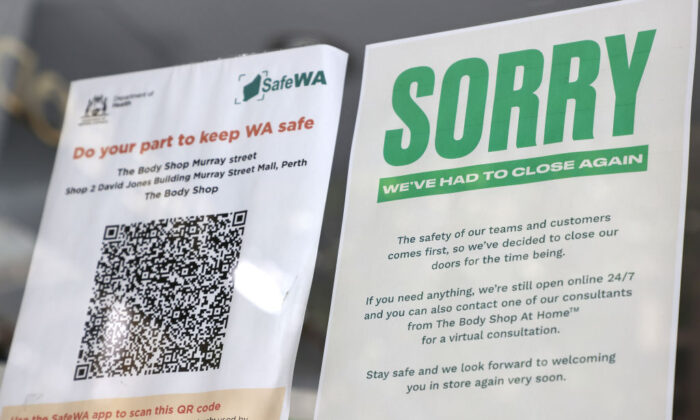 A closure sign is displayed in the window of The Body Shop in Murray St mall in Perth, Australia, on April 24, 2021. (Paul Kane/Getty Images)
Viewpoints

Despite Losing the Vaccine Mandate Case, Australian Police Officer Is a True Hero

Police officer Ben Falconer has lost his court case challenging mandatory vaccination in Western Australia (WA). He took legal action over the compulsory measure, which had required all police officers to get vaccinated for COVID-19, and a direction (executive order) by the chief health officer banning unvaccinated officers from attending police premises.

However, Justice Jeremy Allanson of the WA Supreme Court dismissed his case yesterday, claiming that the actions of the police commissioner and chief health officer were “justified” under the “extraordinary” circumstances of the alleged pandemic.

Allanson stated: “All of the evidence establishes that the COVID-19 pandemic was, and remains an extraordinary emergency.”

It is important in this case to be reminded how dictatorial regimes are normally brought into existence. There is always an “extraordinary emergency” that can be used to justify the violation of individual rights.

We may be repeating history, with the desire to extend emergency powers appearing to confirm the worst fears of the Austrian-British economist and philosopher Friedrich Hayek. In Law, Legislation, and Liberty (1981), this Nobel Prize laureate commented that the continuous renewal of emergency powers always has a way of becoming more permanent.

“‘Emergencies’ have always been the pretext on which the safeguards of individual liberty have been eroded—and once they are suspended, it is not difficult for anyone who has assumed such emergency powers to see to it that the emergency will persist.”

Hayek was stating here an undeniable truth: that extraordinary emergency powers have always been used as a means of suppressing individual rights and dramatically increasing the power of the state.

Allanson also dismissed an application for judicial review by police radio operator Leslie Finlay, who argued the directions violated his “bodily integrity.” However, the common-law principle of bodily integrity says that no person shall be in any way coerced into any medical treatment whatsoever, including vaccination.

Accordingly, the “no jab, no job” order of the WA government is an egregious violation of this common law right to bodily integrity.

In Bowater v Rowley Regis Corp (1944), Lord Justice Scott stated that consent to treatment, including vaccination, is needed to proceed with the treatment:

“… a man cannot be said to be truly ‘willing’ unless he is in a position to choose freely, and freedom of choice predicates, not only full knowledge of the circumstances on which the exercise of choice is conditioned, so that he may be able to choose wisely, but in the absence from his mind of any feeling of restraint so that nothing shall interfere with the freedom of his will.

Dismissing Evidence for the Other Side of the Argument

In his reasoning, Allanson also claimed that the “evidence” showed that vaccination is “effective in reducing rates of infection, and thus transmission,” and two doses were “effective in preventing serious disease.” This part of his argument contains a factual error because the data on COVID-19 deaths reveal a concerning trend where higher death rates are being seen among the highly vaccinated.

According to Dr. Robert Malone, inventor of mRNA vaccine technology used in the Pfizer vaccine, the current situation where the efficacy of these vaccines is fading should have been expected.

“The truth is now, that it’s the highly vaccinated that are putting us all at risk for further evolution of this virus,” he said.

Israel has been held up as a “gold standard” of how to carry out COVID vaccine rollouts. However, in an interview on Aug. 5, 2021, with an Israeli television station, Dr. Kobi Haviv, who is a medical director of Herzog Hospital in Jerusalem, stated that most of its COVID patients were fully vaccinated, including those with severe disease.

It is, therefore, entirely reasonable to suspect that mRNA COVID vaccines are actually suppressing the immune system as there seems to be a clear connection between getting vaccine boosters and falling ill.

Despite all this evidence to the contrary, Allanson argued that his court “needed to be informed by expert opinion, and the state’s witnesses strongly supported the measures that were introduced.”

Curiously, just last month, the prestigious Journal of Food and Chemical Toxicology published a research paper showing that “vaccination induces a profound impairment in Type I interferon signalling, which has diverse adverse consequences to human health.”

Speaking outside the court building, Falconer vowed not to give up. He flagged a possible appeal and justified his continued struggle for the recognition of his basic human right.

“I just have a quote from Martin Luther King [Jr.] that comes to mind, that, as Australians, ‘we have a moral responsibility to disobey unjust laws,’” he said.

On a Good Friday in 1963, a judge had issued a restraining order against King on behalf of city authorities. He ended up being arrested for refusing to comply. In his solitary confinement, on stripes of toilet paper, he wrote why he had decided to disobey unjust laws.

Since King was asking supporters to obey laws that outlawed human rights violations, at first glance, it may seem rather paradoxical that he consciously broke certain laws. One may ask: “How can you advocate breaking some laws and obeying others?”

In answer to this question, King replied:

Regardless of this disappointing outcome, Falconer and all the other plaintiffs are true heroes, and they have my utmost admiration. Australians who have passively watched their government use a broad range of extra-constitutional powers to control almost every single aspect of their lives have a lot to learn from these courageous individuals.

Under this context, Falconer is right, and we do effectively have a lawful right to demand the immediate restoration of fundamental rights and freedoms. We can only hope that the High Court will be willing to assist in the process.