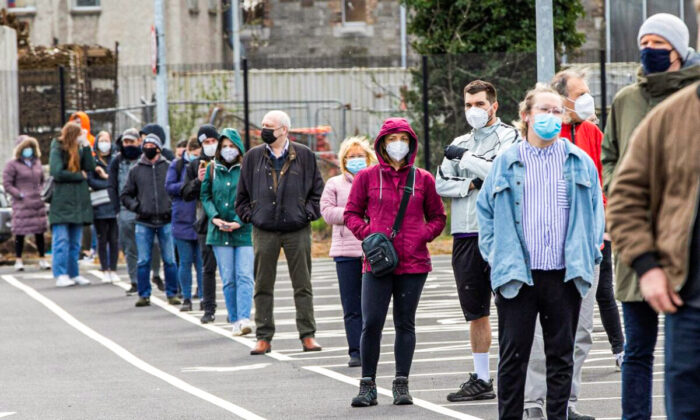 People wait in a queue to receive a swab test for Covid-19 at a walk-in portable testing centre operated by the ambulance service in Dublin, Ireland on March 25, 2021, as the country struggles to reduce the spread of coronavirus. (Photo by Paul Faith / AFP) (Photo by PAUL FAITH/AFP via Getty Images)
WORLD

The government of Ireland, one of the most vaccinated countries in the world, reimposed COVID-19-related restrictions, including a midnight curfew as officials explained that it’s meant to stop the spread of the virus.

About 93 percent of the country’s adult population have received a COVID-19 vaccine, according to government data. And about 89.1 percent of people over the age of 12 are vaccinated.

Despite that, Irish Prime Minister Michael Martin announced in a national address a midnight curfew on bars, restaurants, and nightclubs starting on Thursday.

“The situation is getting worse and will get worse before it gets better,” Martin told reporters on the restrictions. Health officials, as they have in the past, warned that hospitals will face increased pressure in the coming weeks.

In his speech, Martin said he hasn’t ruled out imposing more COVID-19 restrictions if the spread of the virus doesn’t slow down due to the mandates scheduled to go into effect Thursday.

“We’re taking this step by step,” said Martin, adding:  “I know that no one wants to go back to a world of widespread restrictions.”

The move, however, is sure to draw criticism of both the efficacy of vaccines and lockdown orders more than 20 months into the COVID-19 pandemic. Critics of mandates have often pointed to countries and regions with high vaccination rates, including Israel, experiencing surges in COVID-19 despite more and more requirements being imposed.

In October, the chief clinical officer of the Health Service Executive of Ireland, Dr. Colm Henry, told media outlets that the number of people who aren’t fully vaccinated is “not high enough.” At the time of his statement, Ireland had the highest vaccine rate in the European Union, with 92 percent of adults having received it.

Currently, only people who can show proof of COVID-19 vaccination can eat at indoor restaurants and bars, reported the Irish Times.

With the new controls, Ireland joins a growing number of European Union nations to implement vaccine or COVID-19 mandates in recent days. This week, Austria placed a 10-day lockdown on unvaccinated people and directed police officers to carry out spot-checks to determine bystanders’ vaccination status.

During the first day of the mandate, more than 15,000 people were checked by officers across Austria, government officials confirmed on Tuesday. About 120 fines—ranging from several hundred dollars to more than $1,000—were handed down, they said.

Under Austria’s rule, children under the age of 12 and those who recently recovered from the CCP (Chinese Communist Party) virus, which causes COVID-19, will be exempt from the mandate. However, unvaccinated people have to stay in their homes unless they were engaged in essential business or travel, the government said.