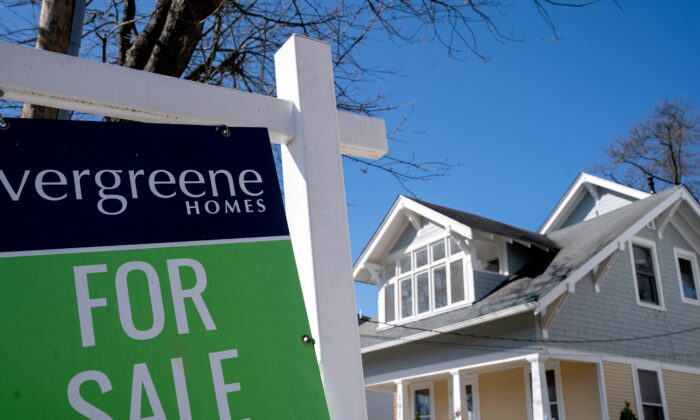 A For Sale sign is displayed in Falls Church, Virginia, on April 2, 2022. (Stefani Reynolds/AFP via Getty Images)
US Real Estate

Despite Falling Sales, Home Prices Keep Rising: What Is Going On?

Today’s U.S. housing market is a study in contradictions. After a stretch of strong and often frenetic activity by buyers during the pandemic period, sales have been in a slump. Housing inventory, which was in acutely short supply before the pandemic, is slowly starting to become a bit more bountiful.

But home prices have continued to rise and mortgage rates have soared this year. As a result, affordable homeownership opportunities remain an elusive commodity.

According to data released on July 20 by the National Association of Realtors (NAR), existing home sales dropped for the fifth straight month in June to 5.12 million, a 5.4 percent decline from the previous month and a 14.2 percent drop from one year earlier. The median existing-home price for all housing types in June was $416,000, up 13.4 percent from the $366,900 level in June 2021—this marked 124 consecutive months of year-over-year increases and a new record.

“The housing market today is going through an adjustment period,” observed Danielle Hale, chief economist at Realtor.com. “We like to think of it as a ‘refresh’—the word that the Fed has used to describe what’s going on in the housing market is a ‘reset.’”

Hale added that many of today’s buyers are finding themselves in a market that is not evolving in their favor.

“This combination of higher prices and higher mortgage rates has made buying a home much more expensive than it was just a few months ago, or even a year ago,” she said. “And that has meant a lot of buyers are having to reevaluate their plans.”

Anthony B. Sanders, chief economist at Artesia Economics and former head of asset-backed and mortgage-backed securities research at Deutsche Bank, pointed out how the housing market has split between the haves and have-nots.

“We’re getting this bifurcated market in housing,” Sanders explained. “For people that are wealthy, they’re still buying houses like crazy. But for housing that’s kind of a starter—housing that appeals to the lower middle class—we’re seeing spiraling prices.”

Sanders added that as a result of this split market, there has been “a great slowdown in the mortgage market in terms of application activity–particularly refinancing. But we’re also seeing a slowdown in the purchases.”

Joel Kan, associate vice president of economic and industry forecasting with the Mortgage Bankers Association, noted that the housing market has been further pummeled by the record-high inflation rate coupled with the Federal Reserve’s strategy of jacking up interest rates.

“And now, with the prospect of a weaker economy and an elevated risk of recession, potential homebuyers have pulled back even more,” Kan said. “Additionally, the new residential construction data have been weaker of late, with a slower pace of housing starts and permits, along with deteriorating homebuilder sentiment driven by declining foot traffic of prospective buyers.”

Mac Cregger, senior vice president and divisional manager at Atlanta-based Angel Oak Home Loans, defined the limited opportunities in affordable homeownership as “the biggest challenge that exists in our country related to housing” and warned that record-breaking pricing for homes runs the risk of warping the housing market.

“When you take most major markets, 40 percent to 50 percent of those markets have average income earners who can’t afford the average sales price because that significantly jumped over the last two or three years,” Cregger said. “I think it will have to level off because we are at a critical point. If we don’t address it, we’ll move into a country that’s multigenerational living, like many European countries where someone either can’t afford land to build on or can’t afford the house themselves.”

Also complicating matters is housing inventory. NAR reported that total housing inventory at the end of June was 1.26 million, up from 1.23 million one year earlier. But even if there were more homes available, they are getting snatched up faster than ever–NAR added that properties typically remained on the market for 14 days in June, down from 17 days the previous year.

“This is anything but a healthy market—it’s a very unhealthy market,” said Craig Oshrin, a real estate broker with RE/MAX Heritage in Westport, Connecticut. “Right now, we’re probably operating between one and two months of inventory, which is very lopsided. My concern is that when things are too good for one party and not a balance for both, that represents an economy where there isn’t confidence for both parties to make the transaction occur.”

This dilemma has proved advantageous to the rental housing market. Realtor.com’s Danielle Hale recalled that in January, there was an even split within the nation’s 50 largest metro areas over whether it was more cost-effective to rent or buy a starter home.

But, Hale said, “By June, it was no contest: in about three-quarters, or 38 out of the 50 largest metros, the monthly cost of renting is lower than buying a starter home. And it’s not that renting has become less expensive–rents are generally rising, too. It’s just that the increase in costs for buying a home has outpaced the increase in rents.”

“If you look at what how much the monthly payment would be to buy a typical home listing at today’s mortgage rate, compared to a year ago, it’s up more than 50 percent,” Hale added. “Today, your principal and interest payment are going to be around $2,000. A year ago, it was just $1,300. And incomes are rising, but they’re certainly not keeping pace with that kind of 50 percent increase.”