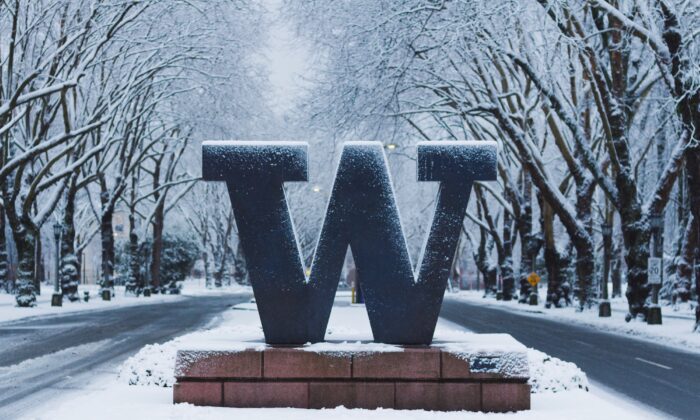 University of Washington's welcome sign under snow. (Illustration/Shutterstock)
US News

Despite Coronavirus Outbreak, Universities of Washington and Oregon are Operating Normally

In Washington, the state Department of Health had announced two COVID-19 cases on Feb. 28. One of those diagnosed was a teenage boy who attends a high school in Mill Creek, about 22 miles north of Seattle. The school was promptly closed through this Monday to disinfect the building and buses. Another Seattle-area high school is also closed “out of an abundance of caution” after a student and parent, reported flu-like symptoms and were self-quarantined.

A Change.org petition was created on Sunday night, urging the University of Washington (UW) to close its Seattle campus to “prevent the spreading of this virus.” The petition received more than 7,500 supporting signatures within 15 hours.

“Many infected individuals may spread the virus without their knowledge,” the petition posted by a UW campus community member reads, “Many students may be infected and may bring this virus into school and other public spaces.”

Despite the petition, the UW administration updated the coronavirus information page on its website, saying that the school will “continue to maintain normal operations.” There are currently no plans to cancel or any class or campus event, “due to the low risk to the UW community,” according to the website.

The information page also says that the school will “never fully close” because UW hosts numerous health care and research facilities that are critical to the virus-fighting effort. However, the school is prepared to suspend some operations and events, move classes online, and entirely suspend all classes, depending on how the situation develops.

In an email to colleagues, UW’s Provost Mark A. Richards and Vice Provost Philip J. Reid said that the school is monitoring the situation and has concluded that since “the number of people in Washington with confirmed infection is low,” instructional changes should be minimal.

“Instructors are encouraged to continue the normal course of instruction,” two UW administrators wrote in an email to colleagues, obtained by Seattle Times. “This is an evolving situation, both in Washington and globally, so circumstances could change rapidly.”

Meanwhile, in the neighboring state of Oregon, health officials announced on Feb. 28 that they have identified a presumptive case of COVID-19 with no known origin. The patient is a female employee of an elementary school in a suburb of Portland. That school would be closed until Mar. 5 for “deep cleaning.”

In response, the University of Oregon (UO) reminded the entire community to take the CDC-recommended precautions. But both of UO’s campuses in Eugene and Portland will operate under normal schedules, at least for now.