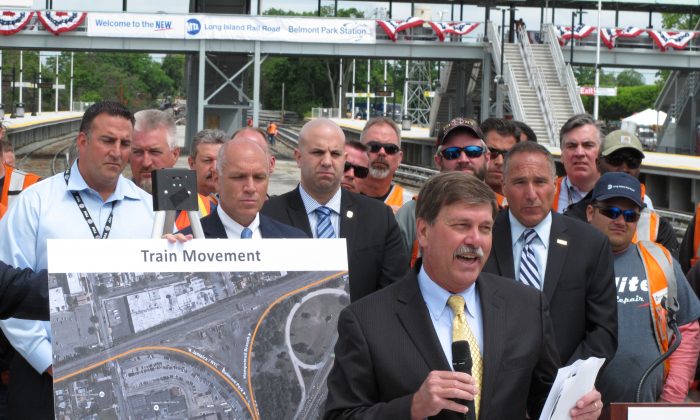 NEW YORK—With an expected crowd that could fill two Yankee Stadiums, officials were warning Thursday that it could take up to two hours to leave after Saturday’s Belmont Stakes, but noted that would be an improvement over last year when some fans spent nearly twice as long jamming into a dilapidated train station or maneuvering through a quagmire of parking lots.

Track officials are limiting attendance to 90,000 this year, after more than 100,000 people overwhelmed the Long Island facilities a year ago. They have scheduled a post-race concert to encourage some of the throng to linger longer, and brought in a former top FBI official to coordinate security and traffic procedures.

“I was there and it was wholly unacceptable last year,” Gov. Andrew Cuomo told reporters this week after the state-run track and transportation system came under criticism for its performance. “I know that the MTA and NYRA have been working on it since then, and hopefully we have a different result.”

The MTA spent $4 million and the New York Racing Association added $1 million to renovate the station.

The Metropolitan Transportation Authority spent $4 million and the New York Racing Association added $1 million to renovate the station and an access ramp leading to Belmont Park following loud complaints a year ago about the long delays in getting an estimated 36,000 passengers onto trains after the race.

“I am extremely confident,” Long Island Rail Road President Patrick Nowakowski said at a press conference to showcase the renovated Belmont Park train station. “If you could just look at this facility and look at what we’ve done and look at the operating plan, I think it’s very obvious that we’ll do much better.”

The train station renovations will allow for 10-car trains, a 25 percent increase in capacity over last year, and railroad officials have devised new routes to get trains in and out of the station quicker. Still, Nowakowski and others advised racing fans to be patient.

“I don’t want to create expectations that everybody is going to be out of here in a half hour,” he said. “Have some patience. We are going to be able to move you much quicker than we were able to last year.”

George Venizelos, who ran the FBI’s New York office and now heads NYRA security, said he has been coordinating with the New York City and Nassau County police departments, as well as state police and MTA police to help streamline the exodus from the track that is situated on the outskirts of New York City.

Pedestrian walkways to the lots will be managed, as well as the flow of traffic out of the parking lots, he said.

“So it’s going to be hopefully a better experience,” Venizelos said. “But it’s still going to take some time to get out. People are going to have to be patient.”