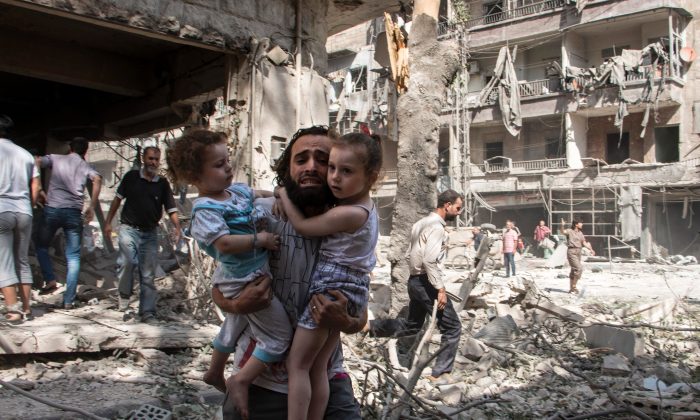 A Syrian man carries his two girls as he walks across the rubble following a barrel-bomb attack on the neighborhood of al-Kalasa in the northern Syrian city of Aleppo on Sept. 17, 2015. (Karam Al-Masri/AFP/Getty Images)
Middle East

In the besieged Syrian town of Madaya, skeletal residents are braving landmines and snipers to scrounge for food despite a rare ceasefire deal that was meant to allow aid to enter.

“We’ve forgotten what bread tastes like,” 27-year-old Mohamed told AFP from the town near the Lebanese border.

People trapped in Madaya are starving to death, Mohamed and other residents said in interviews, and few have any hope.

“The situation has become very tragic,” he said.

Some 40,000 people, mostly civilians, are believed to be in the town in Damascus province, many of them displaced from the neighbouring rebel stronghold of Zabadani.

Both Zabadani and Madaya are under the control of a loose alliance of opposition forces, including secular rebels and Islamist groups.

They are encircled by regime forces, and last year were part of a deal, along with two rebel-besieged villages in northwestern Syria, to allow aid in and the exit of civilians and the wounded.

But so far Madaya has seen only a one-off aid delivery three months ago, and residents, activists, and aid agencies describe dire conditions in the town now.

“There’s nothing to eat anymore. Nothing but water has entered my mouth for two days,” 32-year-old Momina said.

“We just want someone to tell us if help is coming or not because we have nothing here.”

Mohamed said the cost of what food was available was astronomical.

“The situation has become very tragic. Very little can be smuggled in, so the prices of food are extremely high,” he said.

According to the Britain-based Syrian Observatory for Human Rights, at least 10 people have died from lack of food and medicine in the town.

Another 13 have been killed by regime mines or snipers while trying to leave in search of food, the monitoring group said.

It said regime forces had placed additional mines and barbed wire around Madaya since the September deal, adding that some 1,200 people inside had chronic illnesses, and more than 300 children there were suffering from malnutrition and other ailments.

“Many of the town’s residents have been forced to survive on weeds and others pay huge sums of money at government checkpoints to obtain food,” Observatory director Rami Abdel Rahman said.

“One resident who was really suffering put his car on sale for the price of 10 kilos of rice. He is one of many who did that. He didn’t manage to sell it, and a relative of his died as a result of the food shortages,” he added.

“Young people, women, and children have turned into skeletons from hunger. The town needs everything,” said Moaz al-Qalamuni, a journalist in Madaya.

Pawel Krzysiek, a spokesman for the International Committee of the Red Cross who entered Madaya during the last aid delivery, also painted a bleak picture.

“People for far too long have been left without all the basics, basic food supplies, basic medicines, no electricity and no water … I really saw the hunger in the people’s eyes,” he told AFP.

“People were begging us for baby milk,” during the aid delivery, he added.

“They said the mothers cannot lactate, they are malnourished, they are scared. There is no way to feed newborns and the young babies.”

The crisis comes despite a rare deal that was intended to bring relief to Madaya and Zabadani, along with the government-held towns of Fuaa and Kafraya in Idlib province, which are under rebel siege.

The September deal produced a six-month truce to allow the delivery of humanitarian aid and the evacuation of wounded civilians and fighters.

A first aid delivery went ahead, and in December some 450 fighters and civilians from Zabadani, Fuaa, and Kafraya were evacuated.

But there have been no subsequent aid deliveries, and while government forces can air drop some supplies into Fuaa and Kafraya, the opposition has no similar way to get food into Madaya.

Krzysiek said the ICRC and Syria’s Red Crescent were hoping to be able to bring aid into Madaya “as soon as possible”.

“It’s not a solution to do one-off, one-shot food deliveries,” he said.

“In places like that, that have been left without aid for months, even years, you really need to deliver regularly to makes sure that people have enough to food to feed themselves and their families.”