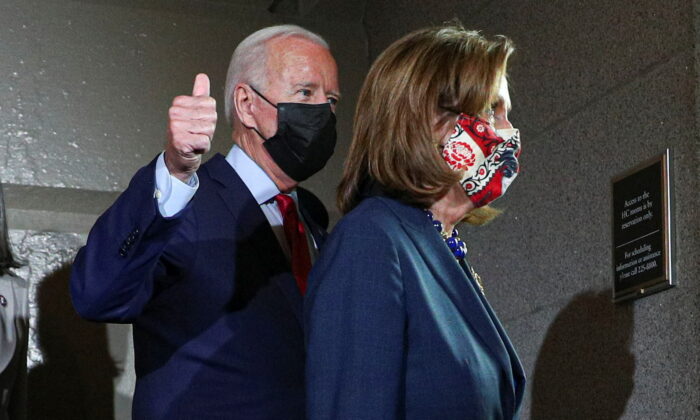 U.S. President Joe Biden gives a thumbs up as he walks with Speaker of the House Nancy Pelosi to a meeting with Democratic lawmakers at the U.S. Capitol to promote his bipartisan infrastructure bill in Washington on Oct. 1, 2021. (Tom Brenner/Reuters)
Democrats

After the White House unveiled a framework deal on Democrats’ multitrillion-dollar budget on Oct. 28, President Joe Biden expressed confidence that the budget bill and the bipartisan infrastructure bill could pass through Congress, after months of squabbling.

Despite this expectation, many progressive Democrats were unwilling to commit to a vote in favor of the new bill.

“President Biden is confident this is a framework that can pass both houses of Congress, and he looks forward to signing it into law,” according to a White House statement. “He calls on Congress to take up this historic bill—in addition to the Bipartisan Infrastructure Investment and Jobs Act—as quickly as possible.”

On Oct. 27, Speaker of the House Nancy Pelosi (D-Calif.) asked the House Rules Committee to hold a vote on the budget bill the next day, indicating confidence among leaders that the bill could pass.

But the specifics of the new proposed bill opened old wounds among progressives, who already saw a $3.5 trillion bill as a substantial compromise; the original budget proposal by Sen. Bernie Sanders (I-Vt.) asked for $6 trillion in new spending.

Now, the top-line price tag of the bill has been halved, to $1.75 trillion. Several Democratic aspirations—including paid family leave, prescription drug cost-cutting policies, and the state and local tax deduction—have been slashed from the new draft.

This reduction was necessary to satisfy moderate Sens. Joe Manchin (D-W.Va.) and Kyrsten Sinema (D-Ariz.), who both warned that they wouldn’t vote for a $3.5 trillion package.

Sinema seemed satisfied with the draft, writing on Twitter: “After months of productive, good-faith negotiations with [Biden] and the White House, we have made significant progress on the proposed budget reconciliation package. I look forward to getting this done, expanding economic opportunities, and helping everyday families get ahead.”

But in their effort to satisfy moderates, Democratic leadership has alienated others in the party. Since its announcement, several Democrats have said outright that they oppose the deal, or they refused to commit to voting for it.

“I feel like a little bamboozled because this is not what I thought was coming today,” she said.

“What we said consistently is that we want to see what’s actually in the bill. We want to see the legislative text. And then we’re, you know, assuming that we’re fine with that, we’ll vote both bills through at the same time.”

Sen. Dick Durbin (D-Ill.) made much the same point.

“There’s a great deal of uncertainty within the caucus as to what’s contained in the deal,” Durbin told reporters.

Others were more ambivalent, indicating that they generally support the bill but are concerned by the absence of some policies.

“I think if you look at the bill that the President announced today, it is probably the most consequential bill since the 1960s,” Sanders told reporters. “But clearly, to my mind, it has some major gaps.”

He indicated that his main problem with the bill as it stands is its lack of health care provisions.

Sanders and other progressives have long fought for prescription drug policies that would lower the cost of medication, and these aren’t included in the framework agreement.

“There is, the best of my knowledge, no language in there that takes on the pharmaceutical industry,” Sanders said. He added that the new budget would include Medicare hearing benefits, but wouldn’t have vision or dental care benefits.

Sanders refused to commit to voting for the bill, but said that he and other Democrats would “fight to make a good bill stronger.”

Sen. Chris Van Hollen (D-Md.) was more optimistic than some.

“There’s lots of important initiatives in this framework … but obviously, there’s some missing pieces,” he told reporters. Still, he said, “for the most part, what I’ve seen so far is good.”

Like Sanders, Van Hollen raised concerns over the lack of prescription pricing provisions.

Sen. Robert Menendez (D-N.J.) refrained from giving his opinion on the bill as a whole, but noted that it doesn’t include reinstating the state and local tax deduction (SALT).

The measure, which allows taxpayers to deduct their state and local taxes from their federal tax bill, is especially popular in high-income tax states such as New Jersey and New York. Lawmakers from relevant states have insisted that the program be included in the bill.

Asked whether he would vote for the bill if it doesn’t contain the SALT program, Menendez said, “I’ve learned a long time to say no in absolutes.” But, he said, “I cannot imagine that this can get all the votes necessary without some SALT.”

The House Rules Committee will meet on Oct. 28 to consider advancing the bill, but in the face of sharp backlash and only lukewarm support, it’s unclear whether leaders will feel confident enough in the bill’s success to hold a vote on it yet.